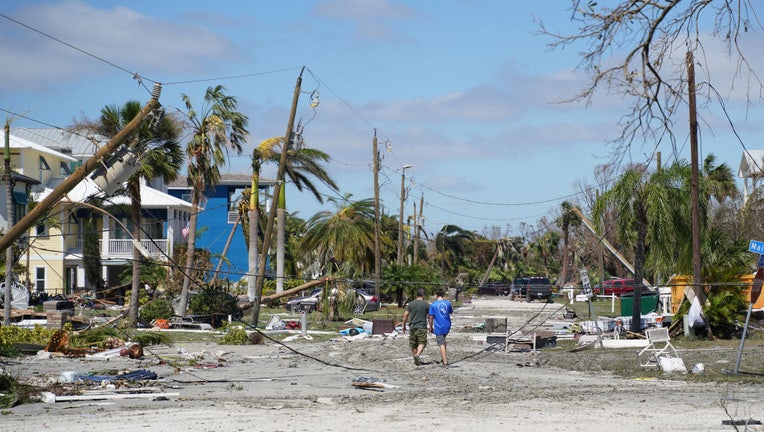 A general view from the site after Hurricane Ian left Florida on Thursday following making landfall as a devastating Category 4 hurricane, on September 29, 2022 in Florida. (Lokman Vural Elibol/Anadolu Agency via Getty Images)

NORTH FORT MYERS, Fla. - When Ian's winds swept into this Gulf coast trailer park, they howled with such force that residents felt they would be lifted off the ground, even blown away.

Now many homes in this community in North Fort Myers are crumpled and splintered. Hurricane Ian pulled, twisted and bent their metal roofs and broke apart their wooden structures.

Burdette sat back on a brown leather chair Thursday, the debris from what was once his living room scattered all about. Along with the chair, a remote control was still intact.

A carpenter by trade, Burdette moved to Florida from Virginia five years ago.

He said his original plan for Ian was to stay in his home and brave out the storm. But the winds were too strong, and at one point, as it roared through, he felt his house being lifted off the ground — up a few inches (centimeters) and then dropped forcefully back down.

"I stayed here for as long as I could until I got scared for my life and ran across the street," said Burdette. He likened his escape to the children's book tale of the Three Little Pigs — running as if from a house made of sticks.

A garden status of Jesus was knocked down by the wind. Burdette struggled to lift it up and place it back in its original spot.
"It’s heavy," he said.

Now he and his wife don't know what they will do next. They have no plans for where to go.

RELATED: FOX donates $1M to American Red Cross for Hurricane Ian relief efforts; how you can help too

Burdette said he felt angry for all that happened. Yet, he added, he had considered himself a good-natured person who helped his neighbors, mowing the lawn of an older lady nearby and helping to improve their properties.

"I am the type of person who doesn’t like to watch others struggle," he said.

"I am questioning my faith, which may not be right, but this isn’t either,'' he said of Ian's damage.

At another homestead nearby, Eduardo David, 68, was clearing debris piled up by the storm against the front of his home. David also rode out the storm at home after finding himself unable to find flights out to Chicago, where he has family.

He said he was boarding up windows from the inside even as the storm was coming through. The winds kept knocking the sliding doors and pushing the windows off track.

"It was heavy winds. The house was shaking," David said.