MENOMONEE FALLS — There is a gas war underway in Wisconsin, and some gas station owners say it could put them out of business. A big box retailer is driving down the price you pay at the pump.

There are more than 3,000 gas stations and convenience stores in Wisconsin. Only nine of them belong to Costco.  But in the past two years, the big box warehouse club has generated far more complaints than any other gas retailer in the state that their gas prices are too low.

Where you fill up your gas tank usually depends on  one of two things; who's closest and who's cheapest.

"The price is always going to drive business," another driver said.

But Matt Hauser says low prices have their limits.

"There is a real impact when an artificially low price is put out there," Hauser said.

He is president of the Wisconsin Petroleum Marketers and Convenience Store Association. 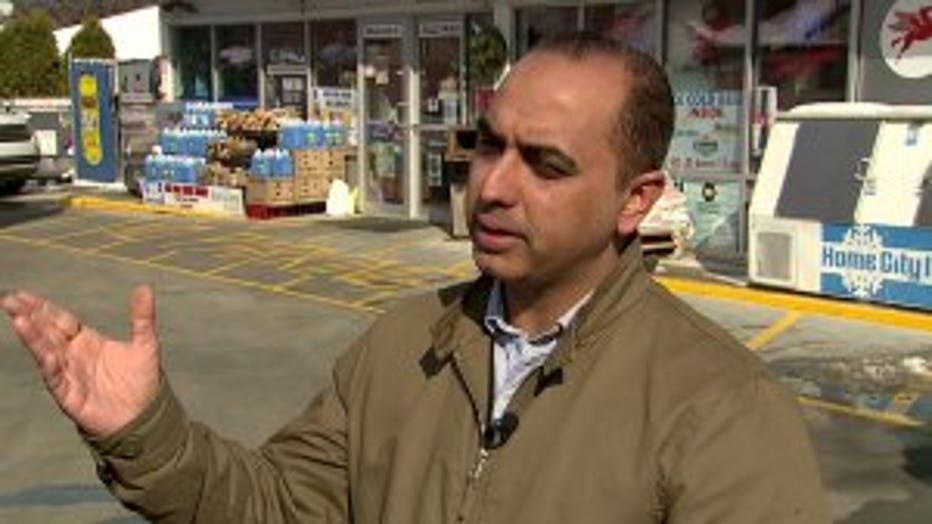 Sony Pal owns the Falls Mobil in Menomonee Falls. He has filed 7 complaints against Costco alleging their prices were too low.

"If we see the big boxes using their pricing power to crush competition and those retailers exit, then that's not good for drivers," he said.

And that's what has Sony Pal worried.

"If you don't make anything on it, how do you survive?" Pal said.

He owns a Mobil gas station on Appleton Ave. in Menomonee Falls, where competition has been especially fierce since Costco entered the market.

"What about the small business owners?" Pal asked. "How will they compete with the sharks like that?"

According to data obtained by the FOX6 Investigators through an open records request, the Wisconsin Department of Agriculture, Trade and Consumer Protection has received two dozen complaints about the price of gas at Costco in Menomonee Falls since it opened in the fall of 2015. Seven of those complaints were filed by Sony Pal.

"Fair competition is something different than what we are facing now," Pal said.

Small businesses like his are supposed to be protected by a Wisconsin law called the Unfair Sales Act, also known as the "minimum markup law."

It requires gas stations to charge you at least six percent more for gas than they paid to get it from the terminal.

"It really just ensures that all of the retailers are competing on a level playing field," Hauser said. 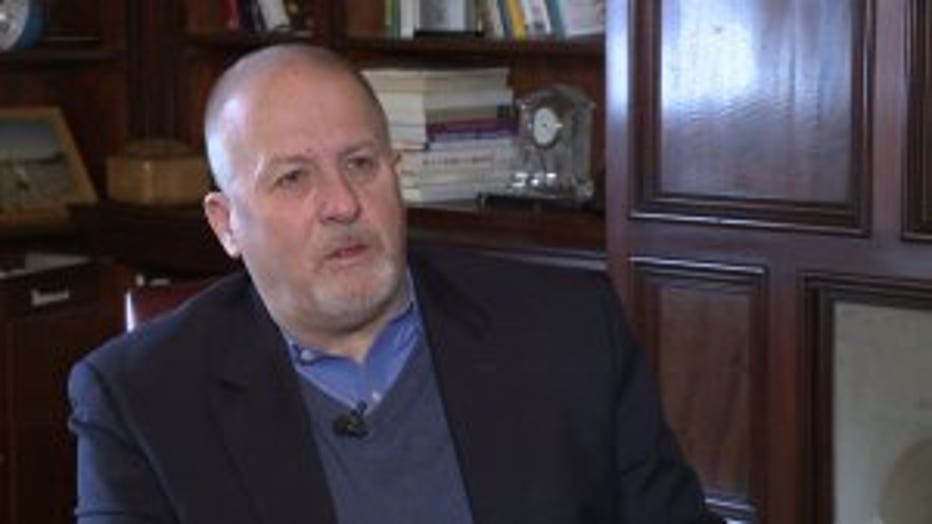 Rick Esenberg, attorney for Wisconsin Institute for Law and Liberty, is suing the state on behalf of Krist Oil to overturn the Unfair Sales Act.

But it's a controversial law that opponents have been trying to eliminate for years.

"It's none of the state's business to interfere in the marketplace in that way," said Rick Esenberg, an attorney for the Wisconsin Institute for Law and Liberty, which is asking the state to declare the Unfair Sales Act unconstitutional.

In 2016, Esenberg filed a lawsuit in Vilas County on behalf of Krist Oil, whose owner operates a chain of gas stations in northern Wisconsin.

"He wants to charge less for gas because he wants to meet the competition, but he can't do it," Esenberg said.

Esenberg says the law artificially drives up the price of gas, while Hauser says it keeps prices down by ensuring more gas stations stay in business.

"Once they knock everybody out, they got the market, they can raise it to whatever they want," said Greg Maurice, owner of a Citgo gas station in New Berlin.

He's filed two complaints against Costco for disrupting the market, even though the nearest Costco store is more than two miles away from his business.

Our investigation finds more than 600 complaints have been filed statewide the past two years -- 162 of them against Costco.

In other words, the big box club operates less than one-percent of the state's gas stations, yet it is the target of more than 26 percent of the predatory pricing complaints. 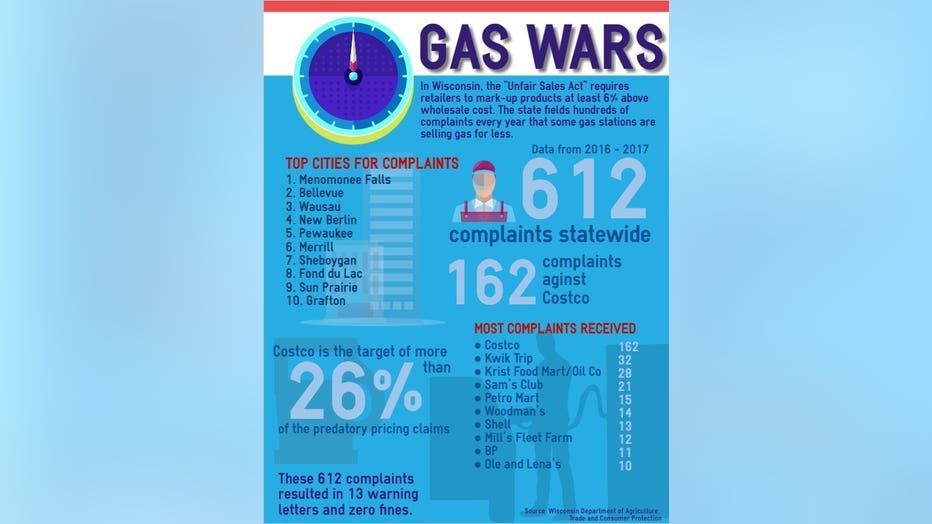 Nowhere is the concern more evident than Menomonee Falls, where 53 complaints have been filed the past two years -- 24 against Costco, 15 against Petro Mart and 14 against Kwik Trip. None of those complaints led to anything more than a warning.

"It is a lot of sound and fury that often results in absolutely nothing with people filing cross-complaints against each other," Esenberg said.

Most complaints are closed without any action because of an important exception to the Unfair Sales Act.

"The law allows you, always, to match the lower price of a competitor," Hauser said.

Gas stations are legally allowed to lower their price to match the competition, even if it means dropping well below the mandated 6 percent markup, and once one station drops, the others quickly fall in line.

"It's like a chain reaction. Everybody follows each other," Pal said.

The pressure to match a competitor's price is intense because most gas stations don't just make money selling fuel. In fact, profit margins are higher inside the convenience stores where most operators are hoping to sell you chips, candy, soda, cigarettes and more. But Pal says if he doesn't keep his gas prices competitive, he loses everything.

"This is what our attraction is, just to pull people in," Pal said.

But while matching a competitor's price is legal, someone has to set that price in the first place.

"And that has always been Costco," Pal said. "I have never seen anybody else going down before them. They drive the market."

Last April, the state reviewed a small sampling of complaints against Costco and issued a warning letter, declaring that the club was "clearly in violation" of the law. The letter indicates that "additional violations" would likely have been identified if the state had done a "more thorough examination."

For 10 months, no one from the state's consumer protection office told Sony Pal about that.

"We made phone calls. We left messages. We never got a decent answer from them," Pal said.

According to the data obtained by FOX6 Investigators, 96 Costco complaints were still listed as "under investigation" as of Jan. 2, 2018. FOX6 asked a spokesman for the state's consumer protection office why those 96 cases were still pending. The next day, the state replied that "all complaints" filed prior to November 2017 are now closed.

And on Feb. 9, Pal finally received a response to his complaints. 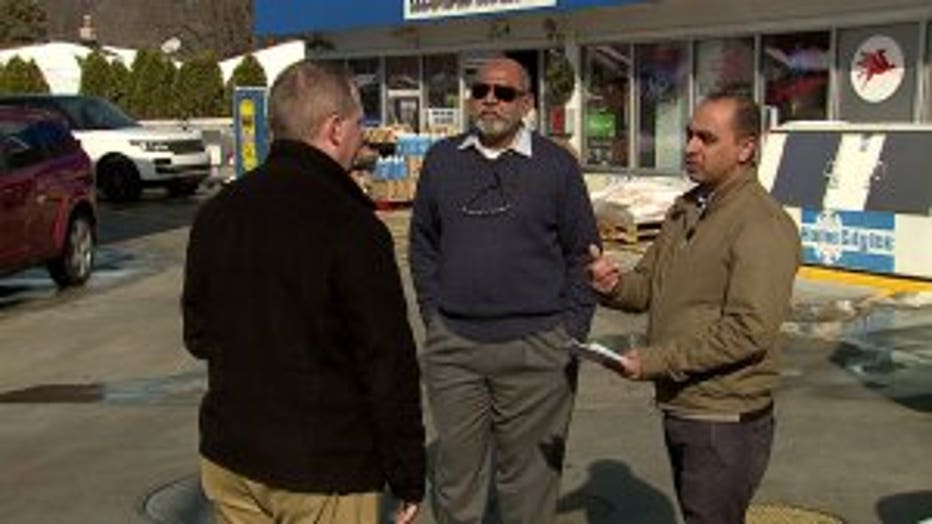 Sony Pal and other independent gas station owners say the state failed to keep them informed about the progress of their complaints.

"I received this letter because of you. Because we gave up!" Pal said.

The letter informs Pal that the state's investigation is complete and that Costco has received "training and education" on how to comply with the law.

"It took 'em over a year to investigate something like that," Pal said.

Even now, he and his fellow gas station owners are not convinced much of anything has changed.

"They're not abiding by the law," Maurice said.

In an email to FOX 6 News, Costco Executive Vice-President John McKay tells FOX6 the company has "well-honed systems" for complying with pricing laws. However, on two occasions in 2016, he writes that the company's conduct "very briefly fell outside" the state's price matching exception. He says that "minor lapses" can happen with a company that operates more than 500 stores in the US and has to keep up with gas prices that change daily. He says Costco disagrees with Wisconsin's "minimum markup" law but is committed to complying with it.

You can read his complete statement here.

The Department of Agriculture, Trade and Consumer Protection says it met with Costco in November and, after that meeting, closed all complaints that had been filed prior to that date. The state has already warned Costco that additional violations could lead to fines. Since November, another 25 complaints have been filed accusing Costco of violating pricing regulations. The state says most of those remain under investigation.