Why CDC recommends masks indoors, even for fully vaccinated people

The CDC updated its mask guidance on July 20, saying that people who live in areas with high COVID-19 transmission, should wear masks indoors regardless of vaccination status.

HONOLULU - Hawaii’s capital of Honolulu, a tourist destination and gateway to the U.S. island chain, will soon require customers of restaurants, bars, museums, theaters and other establishments to show proof of a COVID-19 vaccination or a recent negative test, officials said.

The city joins other cities such as New Orleans, New York, San Francisco and the U.S. territory of Guam that have implemented similar requirements.

Like much of the mainland United States, Hawaii is facing a surge of virus cases fueled by the highly contagious delta variant. Before the Fourth of July, Hawaii had a seven-day average of 46 daily cases. On Monday, that figure hit 874.

Children under 12 are exempt from the new requirements, as well as individuals entering and remaining at an establishment for 15 minutes or less in a 12-hour period. An exception also applies for a restaurant that operates solely as takeout, delivery or a food truck.

Employees of the establishments will have to show proof of vaccination or undergo weekly testing. Blangiardi said businesses that don’t comply could be fined or potentially shut down.

The mayor said the program was a way to control the spread of COVID-19 while avoiding a lockdown.

"We want to create safe spaces for employees and customers so they can feel confident the people around them are either vaccinated or have a negative test," Blangiardi said in a statement. "We will continue to evaluate the program over the next 60 days and if the high infection rate or hospitalization rates have not improved, we will adjust the program to require mandatory vaccinations."

In Honolulu County, 85% of the eligible population 12 and older has had at least one dose of vaccine. Blangiardi said he hopes the remainder of the residents will get vaccinated.

Greg Maples, the chairman of the Hawaii Restaurant Association, said his organization endorsed the new program because it needs the coronavirus to stop spreading.

"Don’t stop eating in restaurants. We need you. We need the business," said Maples, who suggested unvaccinated people order take-out instead.

Republican state Rep. Val Okimoto, the House minority leader, criticized the program, saying it was doubling down on the idea that "government knows best."

"Common sense tells me that if you implement a policy that segregates the vaccinated with the unvaccinated, we’re inadvertently incentivizing the unvaccinated community to gather and spread COVID within their own communities," Okimoto said. 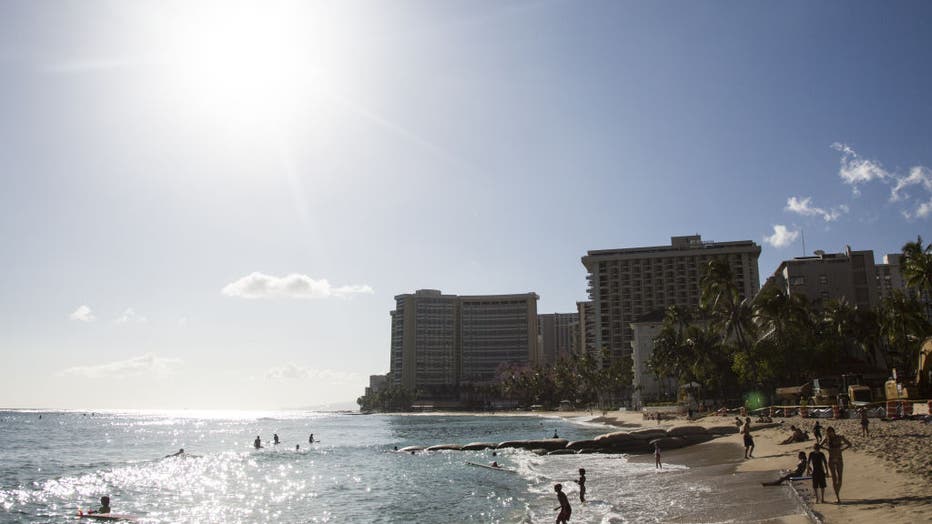 "This notion of people who choose not to get vaccinated and say: ‘It’s my right under these circumstances, but if I get sick, you got to take care of me.’ I don’t understand that logic and that’s not what’s going to work," Blangiardi said.

Earlier Monday, Lt. Gov. Josh Green, who is also an emergency room doctor, said the state’s hospitals can handle a combined 500 COVID-19 patients and perhaps 710 if they stretch their resources to the limit. But at these levels doctors may have to begin thinking about rationing care, he told the Honolulu Star-Advertiser’s online Spotlight interview program.

There were 418 COVID-19 patients in hospitals statewide on Monday, a number that has remained relatively steady for the last week though is one-third higher than one month ago, Green said.

Last week, Hawaii Gov. David Ige urged visitors to only come to the islands for essential business as it struggles to control its virus cases. Ige said he wants to curtail travel to Hawaii through the end of October.

"It is a risky time to be traveling right now," he said.