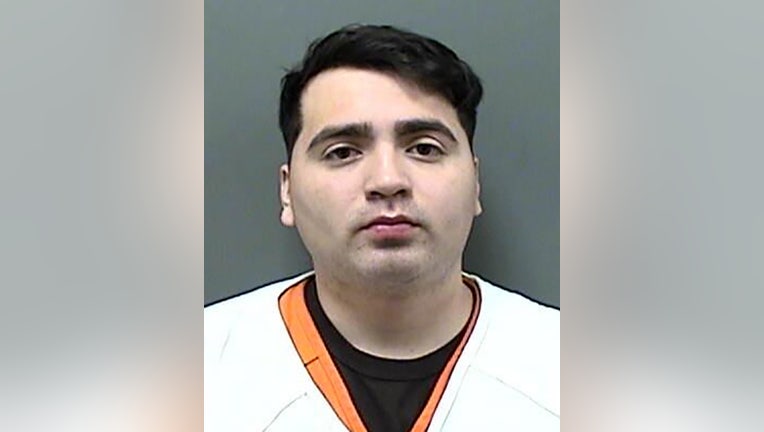 RACINE, Wis. - A 23-year-old Kenosha man is accused in a hit-and-run crash that injured a man in Mount Pleasant on Saturday, April 9. The complaint indicates there was street racing involved.

The accused is Christopher Castillo Moreno – who faces the following criminal counts:

According to the criminal complaint, Mount Pleasant officers were dispatched on April 9 to Newman Road just south of Spring Street for reports of a hit-and-run crash with injuries. Officers arrived on the scene and located the victim who was bleeding and had an apparent broken leg. The victim was flown by Flight For Life to a hospital for treatment of his injuries.

Officers spoke with a witness who stated he "observed a vehicle strike (the victim), and then drive away." Another witness indicated "he saw two vehicles racing," the complaint says. A third witness stated "two vehicles were 'drag racing' and he heard a loud exhaust before one vehicle struck (the victim)."

The complaint indicates a passenger in the striking vehicle eventually contacted police. He indicated 'he saw two people in the road, and told the driver to 'look out.' (The passenger) explained he heard a loud smash, and the driver kept driving, appearing panicked." The passenger told police, eventually the striking vehicle pulled over and "the driver, 'Chris,' got out to survey the damage to his car and wipe the blood away," the complaint says.

Officers determined the driver of the vehicle to be Christopher Castillo Moreno of Kenosha.

The complaint says officers were made aware of doorbell camera video approximately a mile from the crash scene. It "showed two males exit the vehicle, look at the front bumper, and attempt to clean or wipe the front bumper." Officers responded to the area -- and "located a plastic lens and a piece of bloody jean fabric," the complaint says.

The criminal complaint indicates the defendant turned himself in -- and directed officers to the location of the car. Officers "noted the passenger side mirror was gone, and there was extensive damage to the front passenger side of the car, alongside what appeared to be a blood stain."

Castillo Moreno made his initial appearance in Racine County court on Monday, April 11. Cash bond was set at $2,500. The defendant is due back in court for a preliminary hearing on April 21.

A 31-year-old Kenosha woman is accused of possessing drugs a short time after delivering a baby at a Racine hospital.

Police are investigating a rollover crash that happened near 48th and Clarke in Milwaukee on Monday morning, April 11.