“He doesn't want to shed light, he wants to generate heat, and he’s stoking violence in our cities,” Biden said Monday. “He can't stop the violence because for years he’s fomented it."

In one of his sharpest attacks on the president yet, Biden went on to call Trump a “toxic presence in this nation for four years” and accuse him of “poisoning the values this nation has always held dear, poisoning our very democracy.”

“In just a little over 60 days, we have a decision to make: Will we rid ourselves of this toxin? Or make it a permanent part of our nation’s character?” Biden asked.

The speech marked a new phase of the campaign as Biden steps up his travel after largely remaining near his home in Wilmington, Delaware, to prevent the spread of the coronavirus. And, after centering his candidacy on accusing Trump of mishandling the pandemic, Biden is making a broader push to argue that Americans won't be safe if Trump wins reelection. 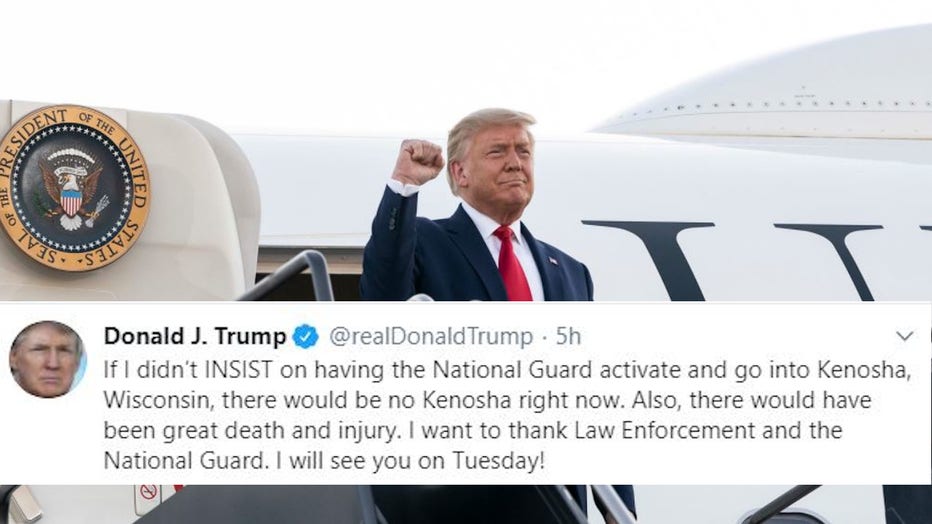 That's an effort to blunt Trump's recent line of argument that a Biden presidency would mean more violence and rioting in the streets, part of the law and order message the president is emphasizing as some protests against racial injustice have become violent.

The Trump campaign has sought to keep that focus because a sense has taken hold in his camp that the more the national discourse is about anything other than the virus, the better it is for the president.

Trump tweeted on Monday: “The Radical Left Mayors & Governors of Cities where this crazy violence is taking place have lost control of their ‘Movement.’ It wasn’t supposed to be like this, but the Anarchists & Agitators got carried away and don’t listen anymore - even forced Slow Joe out of basement!”

Trump and his Republican allies have falsely accused Biden of ignoring the violence committed by some protesters at recent demonstrations, after people were shot at protests in Kenosha, Wisconsin and Portland, Oregon in recent weeks.

On Monday, Biden denounced violence and looting at protests.

“It’s lawlessness, plain and simple. And those who do it should be prosecuted,” he said.

He also accused Trump of being too “weak” to call on his own supporters to stop acting as “armed militia." And he leaned on his own 47-year career in politics to defend himself against Republican attacks.

“You know me. You know my heart. You know my story, my family’s story. Ask yourself: Do I look like a radical socialist with a soft spot for rioters? Really?”

Biden hit Trump on everything from his handling of the coronavirus pandemic to the economy to relations with Russia.

He declared that that even as Trump is “trying to scare America,” what's really causing the nation's fear is Trump's own failures. He pointed to a rise in murders this past year, the tens of thousands dead from the coronavirus and the economic damage done by the pandemic. 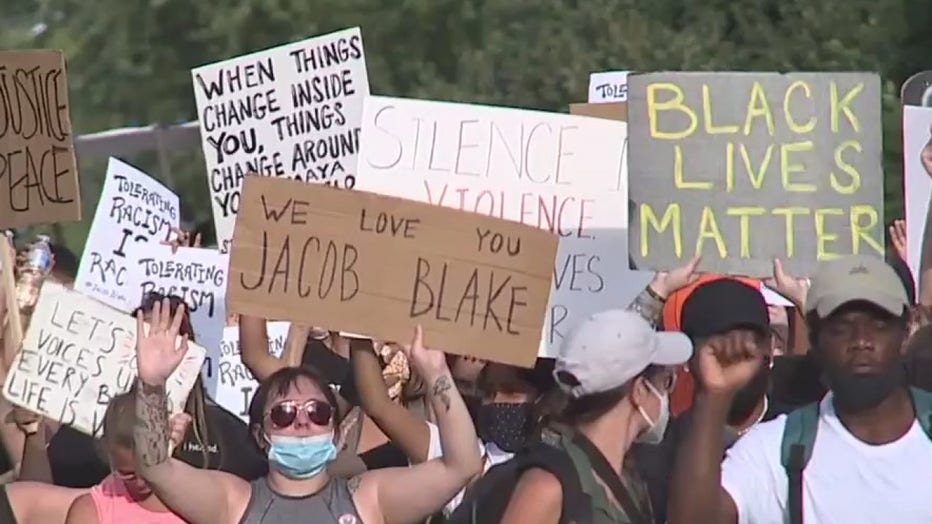 In Kenosha, Wisconsin, the National Guard was deployed to quell demonstrations in response to the police shooting of Jacob Blake, a Black man, that have resulted in some looting, vandalism and the shooting deaths of two protesters.

And this weekend, one of Trump's supporters was shot at a demonstration in Portland, Oregon, prompting multiple tweets from Trump.

Portland has seen nearly 100 consecutive nights of Black Lives Matter protests,and many have ended with vandalism to federal and city property.

Trump and other speakers at last week’s Republican National Convention frequently highlighted incidents of violence at protests that were sparked by the police killing of George Floyd last May, predicting that if Biden is elected in November such incidents will become the norm.

However, Biden accuses Trump of viewing the violence as a “political benefit.” 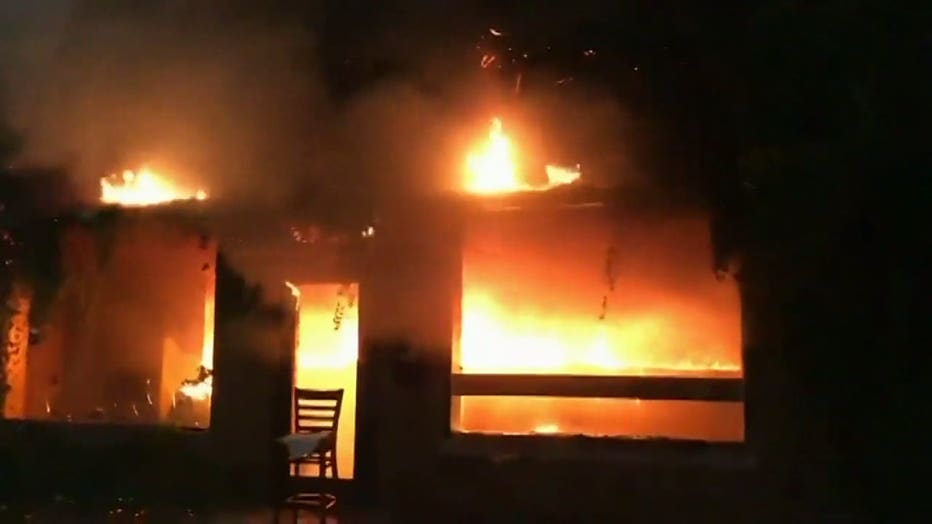 Fires during unrest in Kenosha

For months, Trump was desperately trying to distract from the pandemic, And at times he seemed to receive slight positive bumps in support when touting the possible economic recovery, campaign officials said. But other attempts to change the narrative with cultural wedge issues fell flat, including a defense of Confederate monuments, and polling suggested that Trump was far out of step with the Black Lives Matter movement, which enjoyed wide public support.

The Trump team has leaned hard on the push for law and order, even after it backfired when the president cleared Lafayette Square of peaceful protesters in early June. They now feel more confident of the issue, having spent weeks, and their convention, hammering home one of their closing arguments: that Biden is a tool of the radical left and is powerless to stop the fringe forces.

Monday's Biden speech marked a newly aggressive offense from the Democratic presidential nominee, who has thus far spent much of the campaign laser-focused on attacking Trump for his handling of the coronavirus pandemic. The setting also reflected a ramped-up campaign, as both Biden and his running mate Kamala Harris prepare to engage in more travel after months of campaigning done largely online. 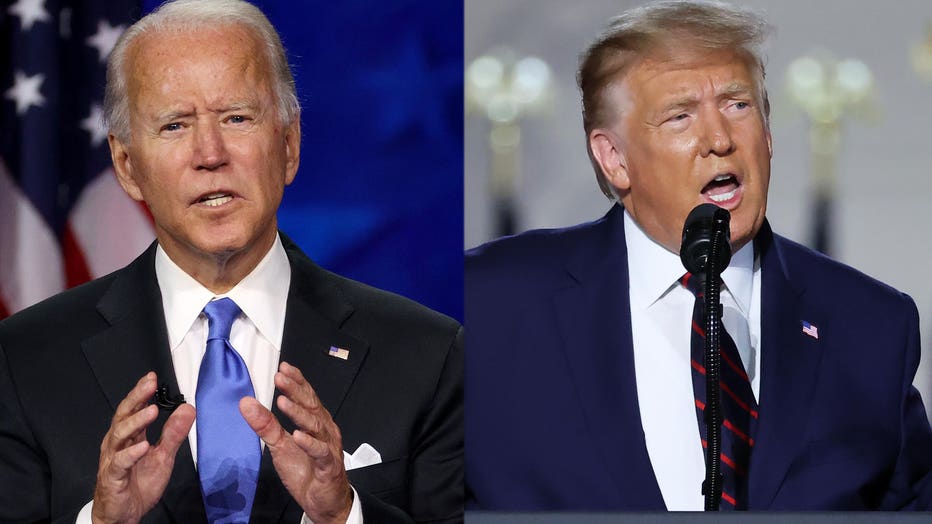 Democratic presidential nominee Joe Biden delivers his acceptance speech on the fourth night of the Democratic National Convention from the Chase Center on Aug. 20, 2020 in Wilmington, Delaware, alongside President Donald Trump delivering his accepta

Pennsylvania in particular is a key battleground state in the November election, and Western Pennsylvania could be pivotal to both parties’ hopes for a win. There, Trump’s strong support among white working-class voters helped him eke out a 44,000-vote win in 2016, but Democrats believe Biden’s appeal to those voters, as well as suburbanites, may help him this November.

This week the state will see a flurry of campaign activity, with Vice President Mike Pence visiting Tuesday and Trump making his own stop Thursday.

In a sign of how significant the state will be for Biden, he offered a direct rebuttal of Republican attacks focused on his stance on fracking, which is a key source of energy industry jobs in the state.

“I am not banning fracking, no matter how many times Donald Trump lies about me,” he said.