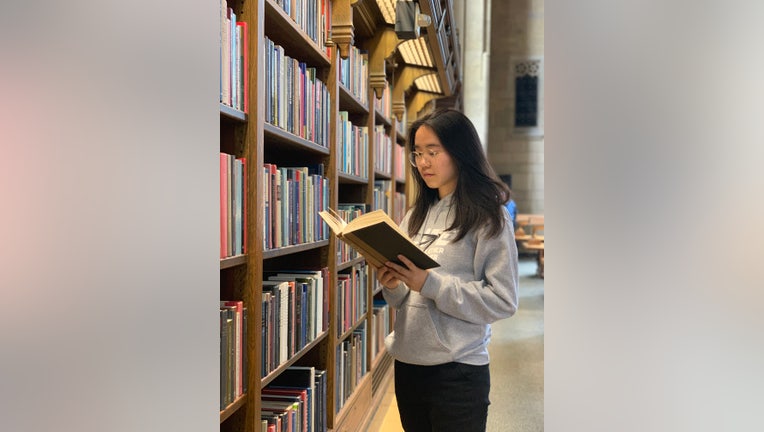 Xin Huang, 18, is a senior at Oakland Tech who stepped up to help her family when her father lost his job and had a stroke.

OAKLAND, Calif. - Recognizing that the Class of 2020 had it tough is an understatement. Not only did these seniors miss out on their last year of high school in person because of coronavirus, but many of their parents lost jobs, their summer plans were canceled and they ended up feeling lonely and depressed.

Still, many students made the best of their situation, rose to the occasion in terms of helping their families out and kept themselves occupied with quarantine-friendly activities.

And many of them chose to discuss coronavirus in their college essay applications, which are taking on new significance this year as the University of California is not accepting SAT scores.

Here are some of their insightful college essays that range from heartache to hope: 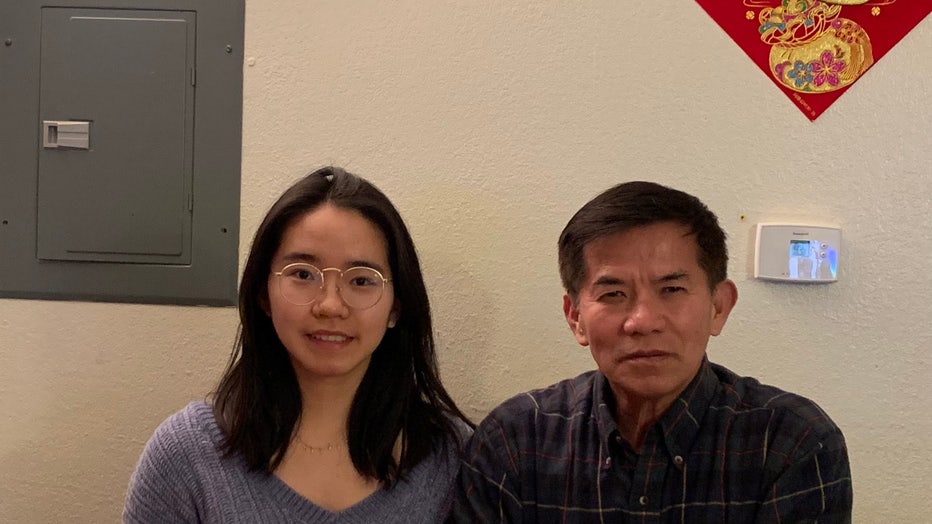 Xin Huang and her father, Mingli Huang of Oakland

I currently live with my aunt and uncle’s family while my father is on unemployment insurance due to the pandemic. My father, who is a chef in a Chinese restaurant, has raised me alone. Recently, my father also suffered a hemorrhagic stroke. The moment he got sick, fear overcame me. I now have insomnia, and I am up countless nights, worrying about our finances and how to care for my Dad and grandmother. It had never occurred to me that someday my father would fall ill. (I’m actually writing my college essay from my father's hospital room at Summit Medical Center in Oakland.)

So in my father’s time of need, I decided to step up and take on more responsibilities. Every day, I visit my father in the hospital. I listen to the doctors. I practice his physical therapy lessons with him. I serve as his translator from Mandarin to English and then doctor-speak back to a language he can understand.

Not only that, but someone has to pay the bills. I returned to work as an assistant badminton coach. I earn $10 an hour and every cent helps pay our telephone fee, food and other daily expenses. I have also started caring for my grandmother, which is difficult because she is bedridden. She also can’t hear very well. Still, I bathe her and feed her every day.

Especially because I am a student working hard to do well in school and attend college --I would be the first in my family to do so. But there is no choice in the matter. This is my role and duty now.

And I believe that I can do this. I am strong. Stronger than I look. My father and grandmother have been my caretakers for so long, it's time now for me to show my strength and be their support. 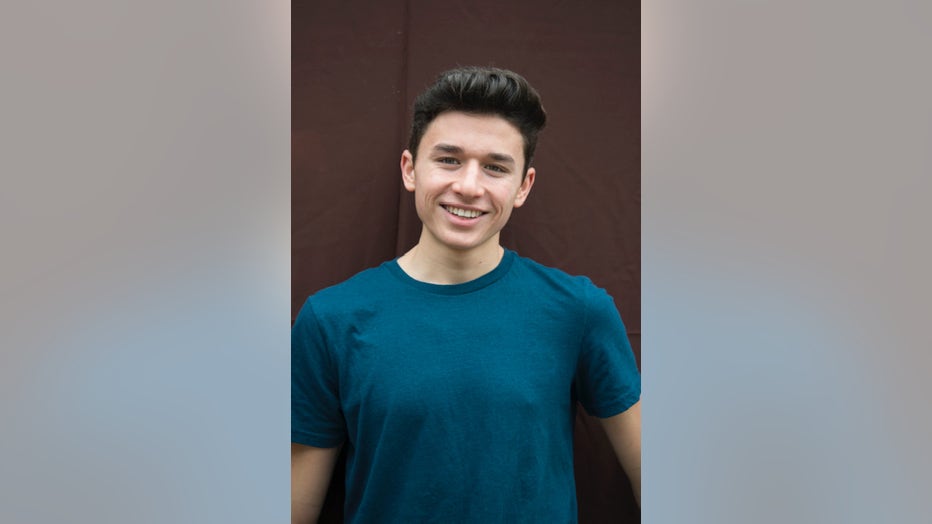 Tali Bojdak-Yates spent the summer working at a homeless shower program in Berkeley.

The summer heading into my senior year, I was supposed to go to China. But as you can imagine, my trip was canceled due to coronavirus.

Instead of being mad, I volunteered at Berkeley's homeless shower program. Each week, I provided soap and towels, and made sure those who were showing followed the time limit and socially distanced.

At first, I was uncomfortable. That is because, without knowing, I was holding many preconceptions about people who live on the street. I thought homeless people were mean, dirty, and uneducated. I was so wrong.

Homeless people are not careless about hygiene. Just the opposite. From the moment we opened, there was a constant line of people waiting to shower. Many days the line was upwards of 40 people. Some people even came twice a day.

I also mistakenly thought homeless people were mean having seen some fighting and yelling on the streets. I was wrong again. The people I met were extremely polite. A regular named John even asked me about my life. He wanted to know what I am planning on studying in college. When I told him mechanical engineering, he made sure to ask me every time if I had built anything new.

I am also ashamed that I assumed the homeless are uneducated. One day, a guy walked in with a UC Berkeley shirt. Turned out, he had four degrees.

I thought I would have held less false stereotypes. After all, Berkeley is considered one of the most liberal places on the planet. Wrong again. Even living in this progressive city, I grew up with implicit biases. Working at the shower program made me realize the only way to get past my biases is to get to know individuals in person. To be honest, I still have not mustered up the courage to start making conversation with homeless people. I still have to work up to that.

What I did learn is that I didn’t even have to travel to China to learn about new people and different cultures. I was able to do that right at home. 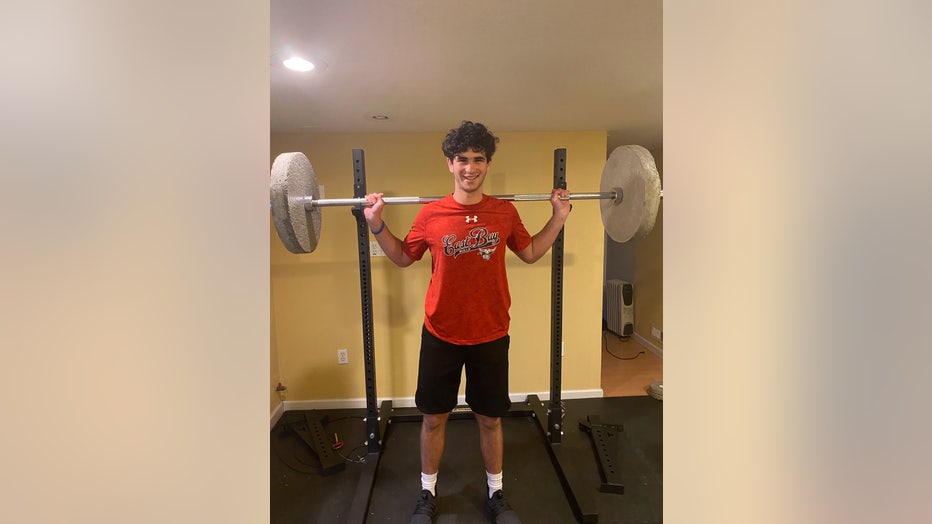 Sid Polston built his own home gym during quarantine.

I had been planning for three projects in the summer of 2020: a history tour of Eastern Europe, visiting Jewish cultural sites; interning with a local political campaign; and attending national baseball showcases. With coronavirus wreaking havoc globally, my summer plans disintegrated. With this new-found time on my hands, I had to determine what activities were going to fill my days. I needed to continue training for baseball, but that would only fill a couple of hours daily. I am not one who likes to sit around, unproductive.

I could no longer go to the gym, and I did not have home equipment, so my goal was to build a home gym.  I discovered that equipment was either out of stock or overpriced, because many people, like myself, had the same idea of building a gym during quarantine. After weeks of scouring the internet obsessively, even scammers were starting to look appealing. I learned that workout equipment was overpriced especially when comparing the costs to pre-coronavirus rates. Therefore, I decided to fill my extra time during the day with making my own sets of weights with materials I could afford.

After I spent time researching design and materials, I realized how much cheaper it would be if I made my own. I enjoyed the entire process, from figuring out what materials I needed, to designing the concrete weights, to the actual casting and painting of them. I also realized that other people were probably in the same situation that I had just experienced.  So I took initiative and started my own business, making and selling home-made sets. I had always wanted to start my own business, and this was the perfect opportunity; moreover, I no longer felt unproductive during quarantine.  I posted an ad on Craigslist for my weights at a price lower than a variety of competitors, and my business is doing well with more offers than I can manage. My sense of entrepreneurship, taking initiative, and dedication to work are qualities that I intend to nurture perhaps separating me from even more experienced manufacturers.

EDITOR'S NOTE: Lisa Fernandez is a college essay coach and has worked with some of these students. If you'd like to submit your Covid-themed college essay, please contact lisa.fernandez@foxtv.com.