Some parents and staff want the Hartford school leaders to resign after FOX6 Investigators show how pandemic aid went to the superintendent's wife.

HARTFORD, Wis. - Some parents and teachers in Hartford are calling on school leaders to step down after a FOX6 Investigation tracked pandemic relief funds to the superintendent's house.

On June 28, in its first public meeting since our investigation, the Hartford Joint 1 School Board set up shop in the Central Middle School auditorium to accommodate a larger-than-usual crowd still buzzing over revelations that the district's longtime superintendent signed a contract steering federal COVID-19 relief funds to his wife.

Such media attention is unusual for the small, suburban district, which consists of two elementary schools and one middle school. And that attention has prompted frustrations among district leaders.

"You want my position?!" bellowed Board President Greg Erickson, pointing toward an audience member. "You want to come up here and do this?!"

Erickson had been largely silent since the FOX6 Investigators first started asking questions and seeking public records in April.

"I'm going to explain myself because I've had this bottled up for two months!" he said to a fellow board member who asked him to withhold comment.

"Louise, let him talk!" came a loud voice from the crowd. 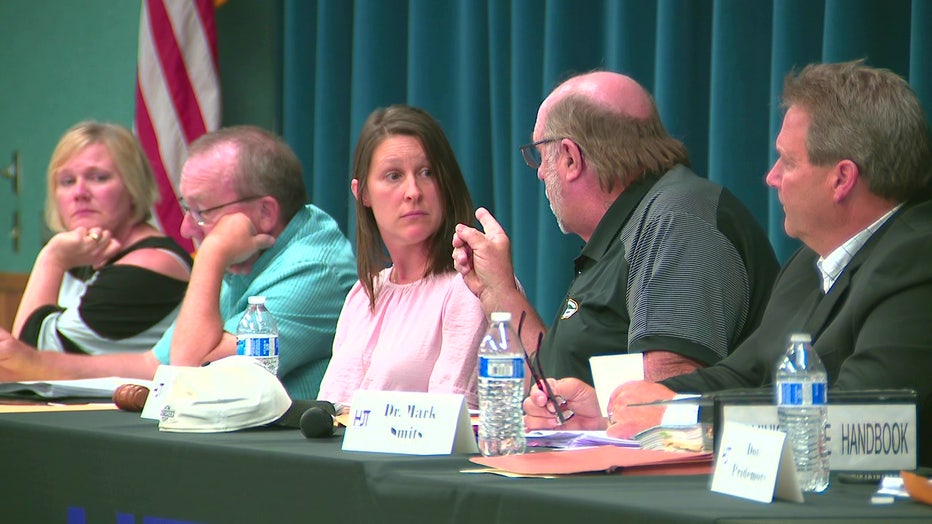 Board President Greg Erickson points his finger at fellow board member Erin Wilk during a tense public meeting June 28.

The tense exchange was one of several that occurred over the next three hours in an auditorium filled with parents and staff members, many of whom came for one reason.

"What has come to light recently with the FOX6 investigation," said Becky Kumar, a district parent.

"Most of us in this room probably wouldn’t know about this if it hadn’t been on FOX6," added Jodi Groonwald, also a Hartford Joint 1 parent.

Since the coronavirus pandemic began, the federal government has allotted Wisconsin schools more than $2 billion in aid, most of which has yet to be claimed or spent. The funds were made available as part of the Elementary and Secondary School Emergency Relief program, also known as ESSER.

The latest round -- known among educators as ESSER III -- directs more than $1.3 milllion to Hartford Joint 1 (not to be confused with Hartford Union High School, which exists as a separate, distinct school district). Last fall, the school board voted unanimously to spend $130,000 of ESSER III funds for a two-year period on a "District Community Coordinator." 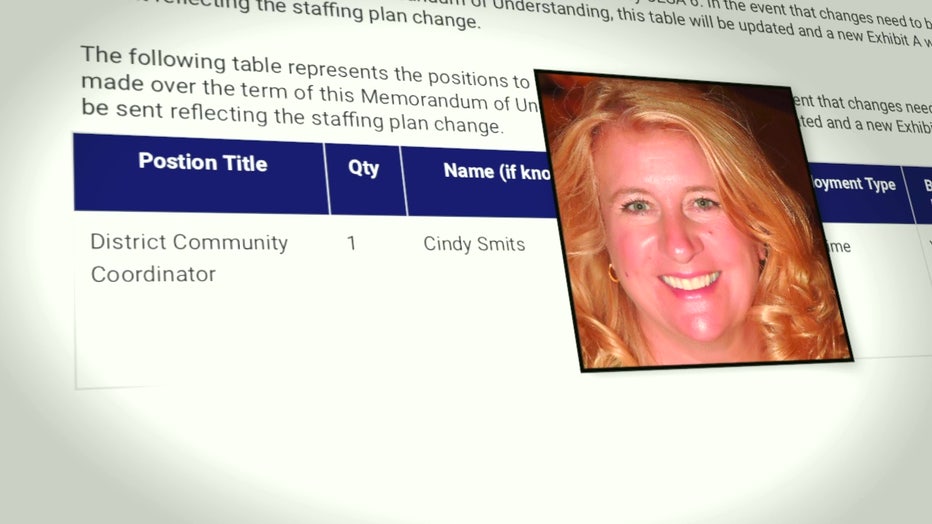 Cindy Smits was retired from Hartford Joint 1 before the board voted in December to use pandemic relief funds to bring her back as a consultant making phone calls to parents. Her husband, Superintendent Mark Smits, signed the contract.

It's a newly-created, work-from-home position aimed at engaging with parents whose children are falling behind because of the pandemic.

"We have to stop that!" said Superintendent Mark Smits, referring to a sharp drop in student test scores since the pandemic began.

In December, Dr. Smits signed a contract that gave the job to a retired district teacher named Cindy Smits --his wife.

"I didn’t do anything wrong," he said.

"Do you think this is a conflict of interest?" asked FOX6 Investigator Bryan Polcyn.

"No, I don’t think this is a conflict of interest," Smits replied.

It doesn't appear anyone in the district raised concerns about the hire. Then again, it doesn't appear many people knew. Cindy Smits' name did not appear in public meeting agendas, minutes or detailed packets of information given to board members before meetings. In fact, a four-page "consulting proposal" provided to board members just days before the December 14 vote merely described "the desired candidate" as a "veteran educator," even though emails obtained by FOX6 show the district knew weeks earlier it would be Cindy Smits and had already made plans to send her resume to CESA 6, the third-party staffing agency handling the paperwork.

Erickson acknowledges that he knew exactly who the board was voting to hire because the superintendent told him in advance in a private discussion outside public view. 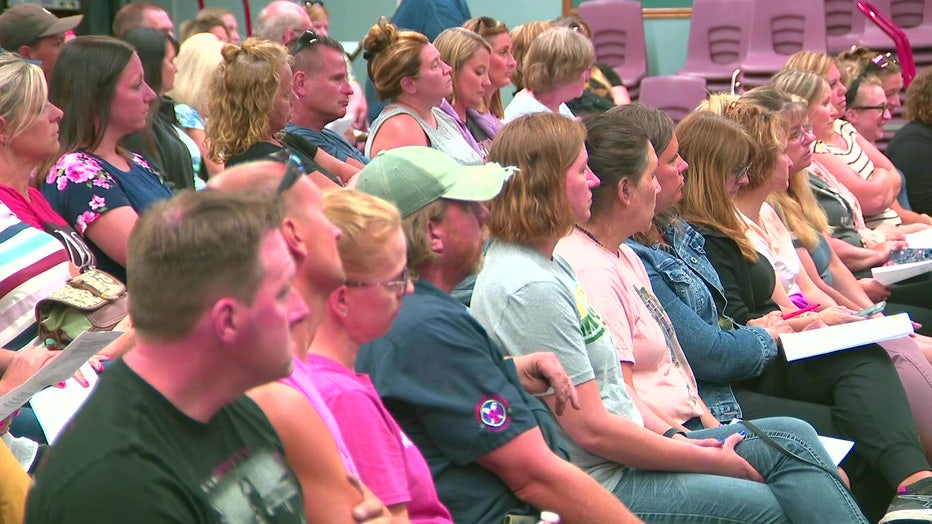 Parents and staff member fill the seats in Central Middle School's auditorium for the first public meeting since our investigation.

"Dr. Smits brought it to my attention that they were thinking about hiring his wife," Erickson explained during the June 28 board meeting.

It's not clear if other board members met with the superintendent privately before the vote, but board member Erin Wilk said no one told her she was casting a vote for Cindy Smits.

"I don’t know why one board member would know more than another, but I did not," she told the audience.

‘What were they trying to hide?" said Jessica Gronbeck, a mother of four children, three of whom are still attending schools in the Hartford Joint 1 district. Gronbeck’s 10-year-old son, Wesley, has reading challenges that require special attention. But Cindy Smits' job entailed no direct contact with students.

"Then what is she doing?" Gronbeck asked.

From January through June 2022, the district - through its contract with CESA 6 – paid Cindy Smits more than $42,000 in salary and benefits to make phone calls to parents about Exact Path, an online diagnostic and learning tool produced by Texas-based Edmentum. 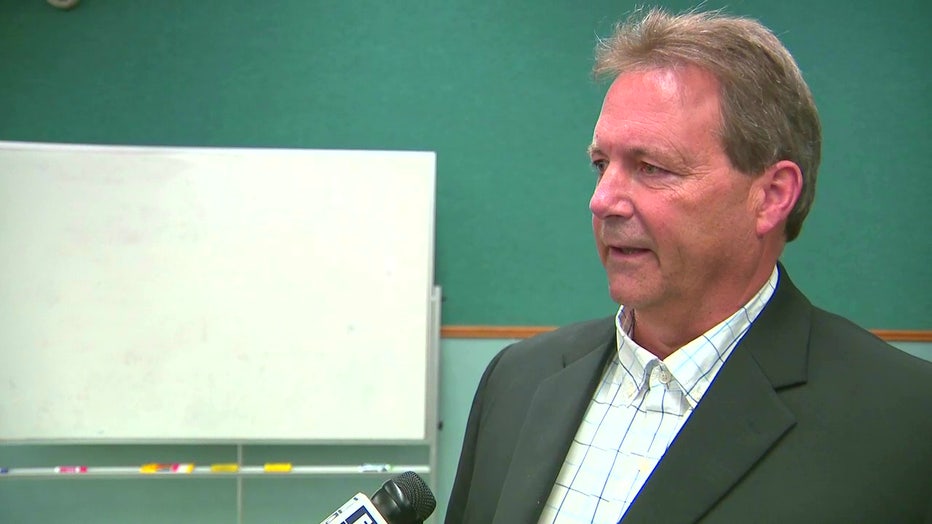 Dr. Smits tells FOX6 "I don't know how how to respond" to calls for his resignation over the handling of his wife's contract.

In April, a draft of next year's district calendar showed teachers would be expected to work evenings - for no additional pay - making similar phone calls to parents that earned Mrs. Smits a full-time salary.

Several responded to that with angry letters to board members.

A half dozen current and former staff members talked to the FOX6 Investigators on the condition we would not identify them.

"Why don't the teachers let us know?" Erickson asked during the meeting.

"Because they're afraid of losing their jobs," answered a voice from the crowd, as board member Wilk nodded in agreement.

After our story first aired on June 8, one teacher came forward. Tiffany Stapleton, an English-Language Arts teacher, stood up before board members and made a request.

"I'm asking the board to reconsider the use of the ESSER funds," she said.

In addition to Stapleton, nearly a dozen parents lined up to make public statements, many wearing bright orange T-shirts that read, Be Kind, RESIGN, and No Confidence.

"We need transparency from the administration," said Lauren Dohman.

"I question how and why the school board and administration let this happen," added Chad Russ.

"Was this position actually benefiting us?" asked Beth Garcia. "Or was it convenient to benefit the superintendent personally?"

Not everyone was critical of school leaders.

"I hear all the grumbling," said Joshua Waszak in a mocking tone. "[Dr. Smits] has been on here 19 years. And all of a sudden, now he’s a problem? Now there’s corruption?"

Some who were critical shared more than words. They made a call for action.

"Maybe the superintendent and the president of the school board should resign," said Groonwald.

"You want me to resign, fine!" Erickson said in an impassioned retort. "You want my position? You want to come up here and do this?! Do any of you guys?! Fine. I've had it up to here!"

Erickson did not actually resign. And Dr. Smits brushed the calls aside. 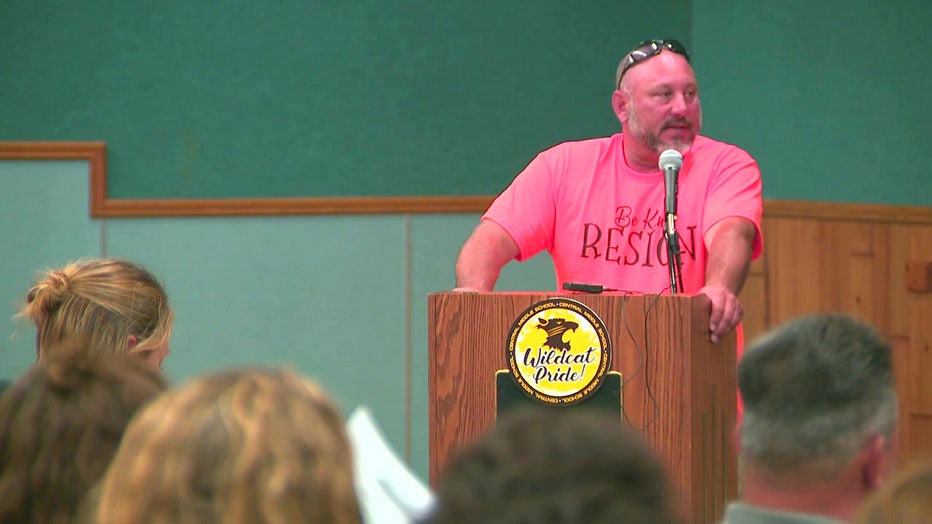 One teacher and nearly a dozen parents spoke during public comment. Nine were critical of school board leadership and school administration. Two defended Dr. Smits. One criticized those in attendance for only coming to meetings when there is "somethi

"I don’t know how to respond to that," he said when asked about the coordinated T-shirts many wore to the meeting.

If their goal was to get parents more engaged, it seems they are now.

The Hartford Joint 1 School District's contract for the services of Cindy Smits expired at the end of June. According to the district's ESSER III plan filed with the Wisconsin Department of Public Instruction and emails between the district and CESA 6, the original plan was to bring Cindy Smits back again this fall at a salary of $70,400 plus benefits.

Since our story aired, however, the board and administration have decided to survey staff members and parents on the district's priorities before settling on how to spend ESSER III funds next year.