Background checks not required when buying from private dealers

Background checks not required when buying from private dealers

MILWAUKEE (WITI) -- Some call it a "loophole."  Others say that's just how it ought to be.  Either way, the internet is making it easy to get a gun - no questions asked.

Over the past 15 years, the FBI has processed more than 100-million criminal background checks on potential gun buyers.  But those checks only apply to the sale of guns through a federally licensed firearms dealer.

Don't want a background check?  No problem.  Just buy from a private seller instead.

Last month, the FOX 6 Investigators took hidden cameras into a gun show at Serb Hall to see just how easy that is.  We found most of the vendors were licensed dealers who did have to perform background checks.  But there was one individual liquidating his private collection.  And he was quick to boast about the advantages of buying a gun from him.

For years, gun control advocates have referred to that as the "gun show loophole."  But you don't have to go to a gun show to avoid a background check.

We found a Milwaukee area gun owner willing to meet in a matter of hours, after we found his classified ad posted on Armslist.com -- a website devoted to the buying, selling and trading of firearms.  And on October 21st, FOX 6 Investigator Bryan Polcyn arranged to meet him.

"I don't know how best to do this without attracting too much attention," the seller said, as he emerged from his car in the parking lot of a local mall. 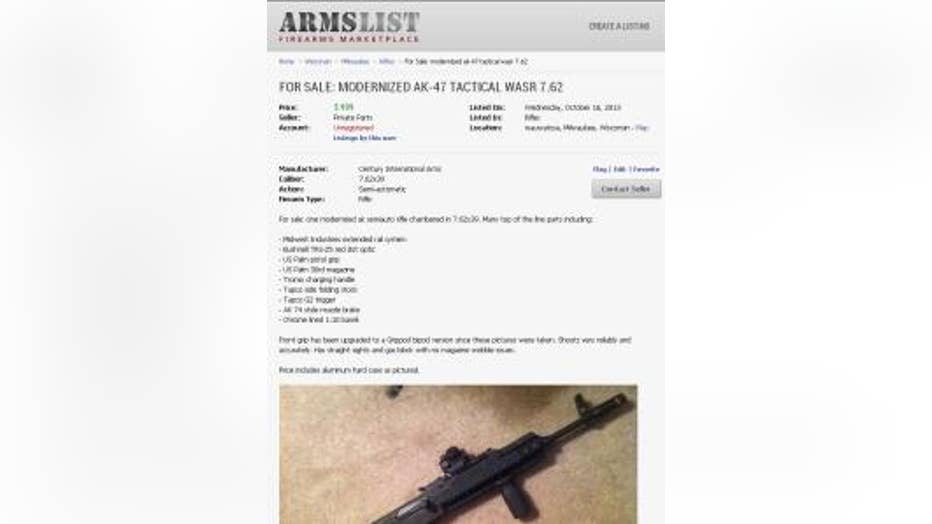 FOX 6 contacted the poster of this Armslist ad and within hours had a face-to-face meeting at a local mall parking lot.

He wanted to sell an AK-47 for $999.  He didn't know the potential buyer was really a reporter.  In fact, he didn't know anything about the buyer.  It could have been a criminal, a domestic abuser, or a man with a dangerous mental health problem.  He didn't know -- and he didn't plan to find out.

"For the time being, we're not doing anything illegal," the seller said.  "So it's fine."

That's true.  It is perfectly legal.  But the seller seemed a bit uncomfortable about one thing.

"It occurs to me this might be a funny place to be doing this," he said.

You see, he met us in the parking lot of Brookfield Square on the one-year anniversary of a mass shooting that took place right across the street... at the Azana Salon and Spa.

"And that's exactly what happened in Zina's case," said Elvin Daniel, the brother of an Azana victim.

Daniel knows just how easily a person who shouldn't have a gun can get one, online. His sister, Zina Daniel, was gunned down at Azana by her husband, Radcliffe Haughton.

Three days before the shooting, a judge issued a restraining order that prohibited Haughton from possessing a firearm.  But that didn't stop him from posting an ad on Armlist.com, looking to buy a handgun.

The ad Haughton posted specifically sought a gun from a private party.  He wrote that "any caliber" would do.  He had cash.  And he wanted the gun "asap."

Within hours he had the 40-caliber Glock he would use the next day to murder three people and wound four others.

"Had there been a background check done before he bought the gun," Daniel says, "there's a good possibility that Zina would still be with us today."

It wasn't easy for Elvin Daniel to come to that conclusion.  He's a hunter, trap shooter and NRA member who describes himself as "pro-gun."

"I am not the bleeding heart liberal that I want to take all guns away," Daniel said.

But ever since his sister's murder, he's become the one thing he never wanted to be.  He's a spokesman for the movement to approve background checks on all gun sales.

Last week, he was in Washington, promoting renewed efforts to pass a background check bill in Congress.

"It's the most important step we can take from keeping guns outta people who shouldn't have guns," he said.

Polls by the New York Times, Fox News and Gallup each found 91 percent support for background checks on private gun sales.  But that was last winter, after the massacre of children in Newtown, Connecticut.

How do Americans feel today?

"We shouldn't decide what our constitutional rights are based on polls," said Brad Schimel, a Republican candidate for Wisconsin Attorney General.

Schimel says the biggest problem with expanding background checks is the potential for creating a national gun registry.

State Assemblyman Jon Richards is running for Attorney General as a Democrat.

He's also the lead author of a bill that would require private gun sellers to go through a licensed dealer to do a background check on a buyer.

"Who is going to pay for the development of that bureaucracy?" Fendry asks.

He says the background checks we're already doing are a waste of time and money for law-abiding citizens.

"It doesn't do any good.  The people that are getting firearms for unlawful purposes, any means of violence, usually use other means," Fendry said.

But a recent investigation by the group "Mayors Against Illegal Guns" found criminals are going to websites like Armlist in big numbers.  Their report, published in September, claims that one out of every 30 buyers posting "want to buy" ads on Armlist is a criminal.

And our investigation finds that 9 out of 10 sellers on the site are private parties who are not required to do a background check.

The AK-47 seller we met admits, "It's hugely unregulated."

"It's kind of strange to me anyways that there are no transfer laws, person to person, that kind of stuff," the AK-47 said.  "There probably should be."

"If you want to get around the law, it`s very easy to do it," Richards says."  And we want to stop that."

"Putting more rules on the books isn`t going to stop these things," Schimel counters. "We need to enforce the laws that we have now."

Before his sister was killed, Daniel admits he probably would have agreed.

"Sometimes, I do feel like I'm a little bit of a hypocrite," Daniel admits.

He's against banning assault weapons.  He disagrees with limits on the number of bullets in a magazine. But he is adamant that a background check could have saved his sister's life.  And now he wants to do his part to save others.

"In a great country like America that we live in, when is enough enough?" Daniel asks.

Congress shot down a background check bill for private sales last spring.  And Richards' bill has yet to get a hearing in Madison.

Why so many roadblocks?  The NRA's lobbying arm recently wrote in a blog that "If the background check was free, fast, and did not produce any gun or gun owner registration lists, it would likely face less opposition from gun rights advocates."

But, the NRA blogger writes, recent proposals have been far from that.