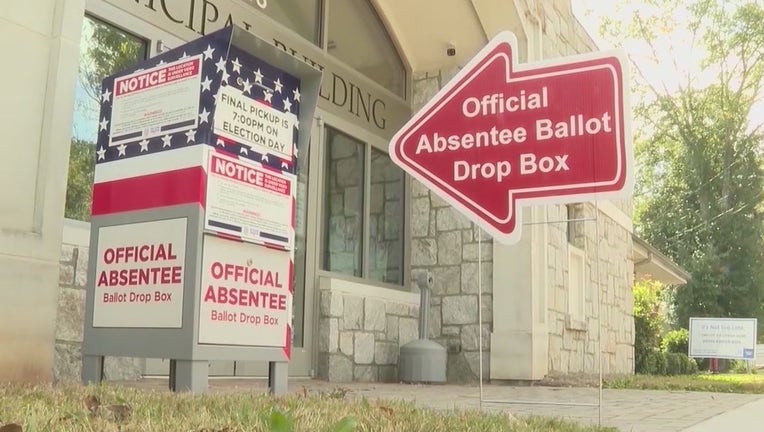 The lawsuit, filed Sunday against Secretary of State Brad Raffensperger and other members of the State Election Board, asks a judge to find that the law violates the U.S. Constitution and the Voting Rights Act and to block state officials from enforcing it.

The complaint argues that Republican "officials have resorted to attempting to suppress the vote of Black voters and other voters of color in order to maintain the tenuous hold that the Republican Party has in Georgia."

"In other words, these officials are using racial discrimination as a means of achieving a partisan end," it says.

The change to Georgia’s election law comes after Democrats won the presidential contest and two U.S. Senate runoffs in the once reliably red state.

The complaint was filed by the Georgia NAACP, Georgia Coalition for the People’s Agenda, League of Women Voters of Georgia, GALEO Latino Community Development Fund, Common Cause and the Lower Muskogee Creek Tribe.

"The thinly-veiled attempt to roll back the progress we have made to empower Georgians - to use their voices in the democratic process - creates an arbitrary law that does not improve voter confidence, secure election integrity nor increase access to the ballot box," said Rev. James Woodall, state president of the Georgia NAACP.

The new election law was signed Thursday by Republican Gov. Brian Kemp, just hours after it cleared the state legislature. It is part of a tide of GOP-sponsored election bills introduced in states across the country after former President Donald Trump made false claims that fraud contributed to his election loss in November.

The Georgia law adds a photo ID requirement for voting absentee by mail, cuts the amount of time people have to request an absentee ballot and limits where drop boxes can be placed and when they can be accessed. It also bans people from handing out food or water to voters waiting in line and allows the Republican-controlled State Election Board to remove and replace county election officials.

The law does not contain some of the more contentious proposals floated by Republicans earlier, including limits on early voting on Sundays, a popular day for Black churchgoers to vote in "souls to the polls" events. It instead mandates two Saturdays of early voting ahead of general elections, when only one had been mandatory, and leaves two Sundays as optional.

Republicans in Georgia argue that the law is needed to restore voters’ confidence and that it actually expands voting access.

"Georgia’s Election Integrity Act that I signed into law expands early voting and secures our vote-by-mail system to protect the integrity of our elections," Kemp said in a recent tweet. "The Peach State is leading the nation in making it easy to vote and hard to cheat."

The passing of the bill led to quick protests and the arrest of Atlanta state Rep. Park Cannon after Capitol police say she was disrupting the governor while he was signing the bill.

On Thursday, President Joe Biden spoke out against the new law called such Republican efforts "un-American" and "sick."

"This is Jim Crow in the 21st Century," Biden said, referring to laws of the last century that enforced heavy-handed racial segregation in the South.

"It must end. We have a moral and Constitutional obligation to act," he said. He told reporters the Georgia law is an "atrocity" and the Justice Department is looking into it.

Kemp lashed back, accusing Biden of attempting to "destroy the sanctity and security of the ballot box" by supporting what the governor sees as federal intrusion into state responsibilities.