Both Gov. Tony Evers and Madison Mayor Satya Rhodes-Conway condemned the violence and destruction Wednesday morning. Meanwhile, a spokeswoman for the protest group issued a list of demands. Governor Evers announced Wednesday morning he was prepared to activate the Wisconsin National Guard to protect state buildings and infrastructure.

“The protests in Madison last night resulted in serious injury to bystanders as well as significant damage to state property,” said Gov. Evers in a news release Wednesday afternoon. “The Wisconsin National Guard will serve in a limited authorization meant to make sure people can exercise their First Amendment rights while ensuring the safety of members of the public and state buildings and infrastructure.”

The violence began after a group of 200 to 300 protesters marched through downtown Madison, initially blocking intersections and obstructing driveways, Madison Police Department said in an incident report. The situation escalated when the group reached the State Capitol grounds.

Tension and destruction included a crowd pulling down prominent statues.

Anderson-Carter was nearby as the protests took a turn following the arrest of a black man near a Madison restaurant. Cellphone video shows the 28-year-old man using a bullhorn and carrying a baseball bat inside the building before his arrest. Police said he had to be tackled as he attempted to escape custody. 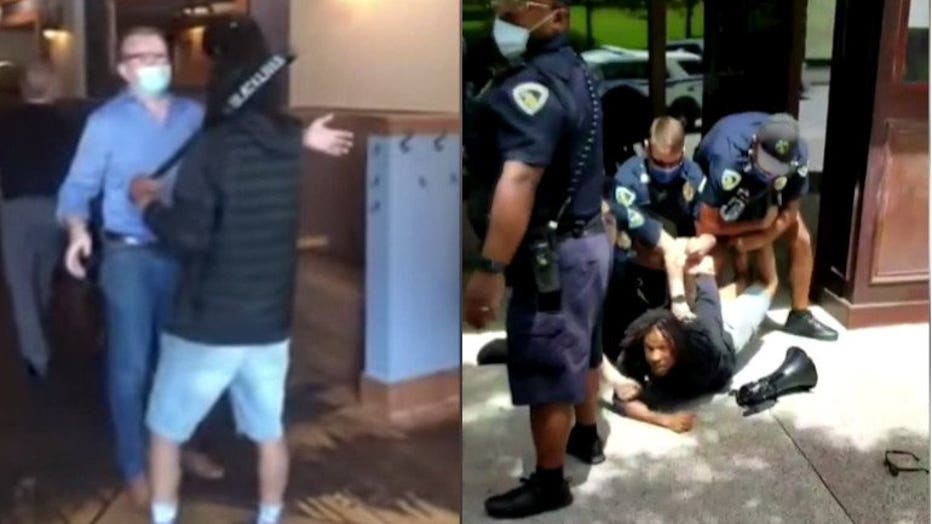 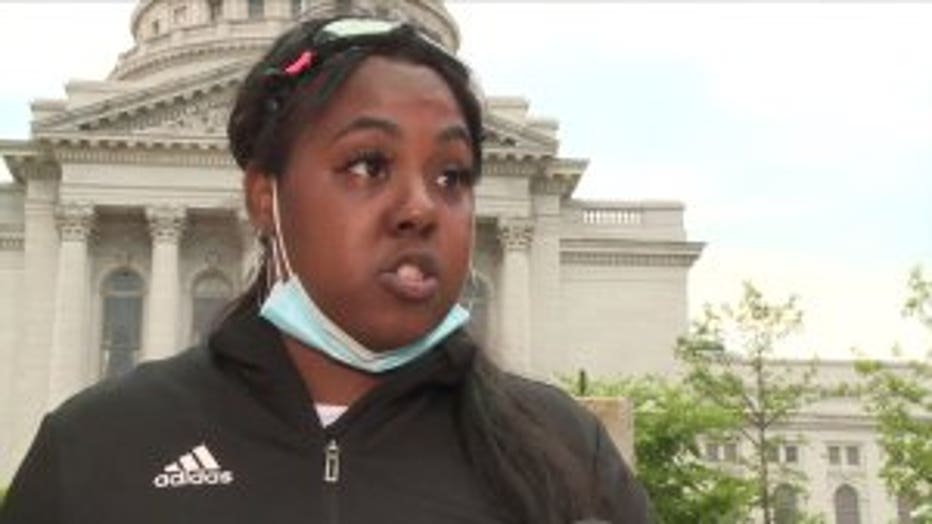 "We walked into Cooper's Tavern," said Anderson-Carter. "He made a political statement and he left and was greeted by violence he didn't give to anyone."

Glass at the nearby Tommy Thompson Center was shattered. Protesters also broke the windows of multiple buildings on the Capitol grounds and tossed in a Molotov cocktail into the City County Building, police said. The group tried to break into the Capitol building, but officers repelled them with pepper spray.

"This morning, I woke up, I saw the headlines, and wanted to see what was going on," said Elliott Schochet. 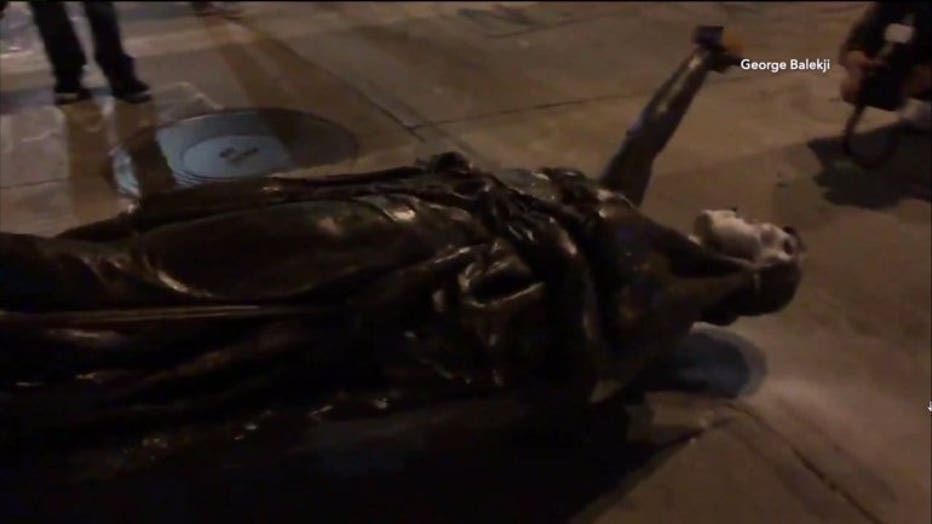 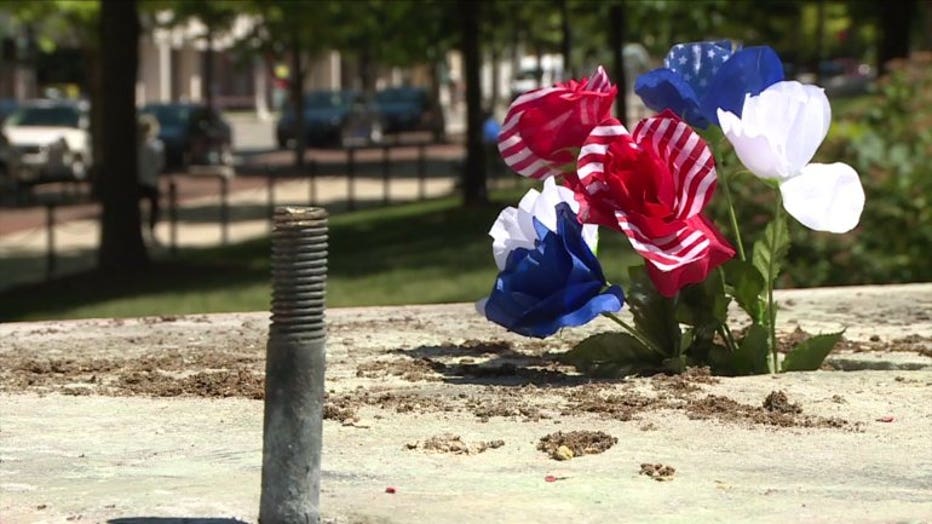 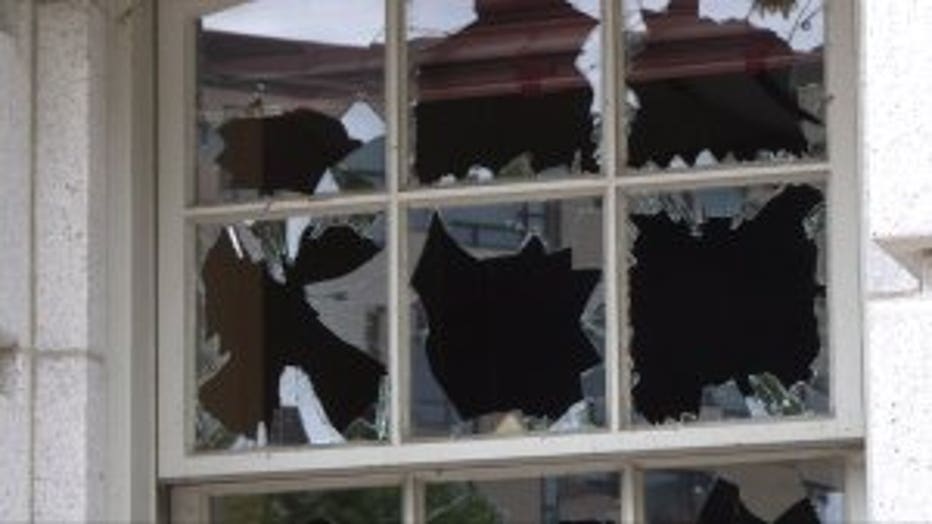 Schochet spoke with FOX6 News near where the "Forward" statue once stood before being dragged down the street. A statue of abolitionist Hans Christian Heg was also toppled.

"The other one I know is a Civil War general who was a famous abolitionist, I believe, so that doesn't make sense," said Schochet.

State Sen. Tim Carpenter, D-Milwaukee, was walking to the Capitol building late Tuesday when he encountered the protesters and began recording them. Carpenter said that he was “assaulted and beat up” by eight to 10 people as he took the video. He shared the 11-second footage on Twitter.

“This is the picture that got me assaulted and beat up by a mob,” he wrote. “Punched & kicked in the head. Might have concussion, left eye a little blurry, cheek shollen (sic), sore neck and ribs. This has to stop before some innocent person get killed. I locked up in the Capitol until it’s safe.”

Anderson-Carter who told WMTV early Wednesday that she was the spokeswoman of the group, which she described as “a united front of organizers and activists for black liberation" relayed the group’s demands, which included the release of the man whose arrest Tuesday triggered the protests.

"There's not enough people like me that are willing to stop the argument and create a positive dialogue," said Anderson-Carter.

The group’s other demands included the firing of a Madison police officer and that the department be defunded, with the money given to the community, WMTV reported.

A Black Lives Matter organizer reiterated to FOX6 the group was no part of vandalism and destruction in Madison overnight.