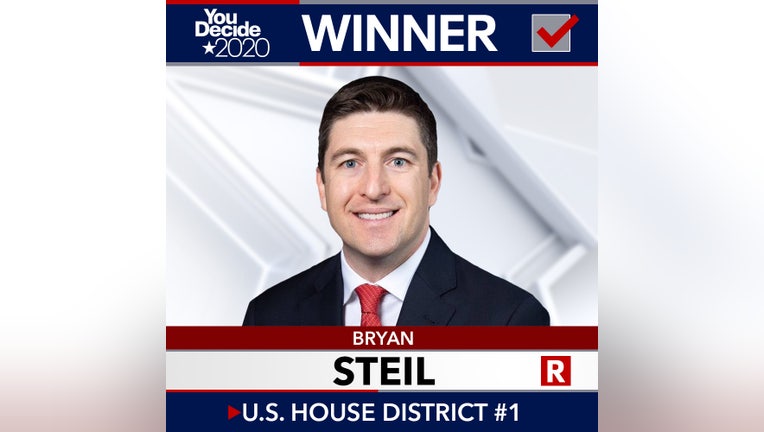 Wisconsin’s 1st U.S. House District encompasses Wisconsin’s southeastern most area — from as far west as Janesville all the way to Lake Michigan. It extends from the Wisconsin-Illinois border north to encompass southern Milwaukee and Waukesha counties. All of Kenosha an Racine counties are part of the 1st U.S. House District, as is the vast majority of Walworth county.

Steil beat Democrat Randy Bryce with 54.6% of the vote in 2018. In that race, Steil filled the seat vacated by former House Speaker and former Vice Presidential Nominee Paul Ryan. Ryan, who had held the seat since 1999, opted not to seek re-election in 2018.

Steil is in his second year representing the 1st U.S. House District and seeking a second two-year term.

Steil has worked on the CARES Act amid the COVID-19 pandemic and worked with the White House Coronavirus Task Force. According to his campaign website, Steil has a history of private-sector experience and his priorities include advocating for farmers and manufacturing and exposing human trafficking.

A University of Wisconsin alumnus, Steil had been appointed to the UW Board of Regents in 2016 by then Gov. Scott Walker.

Polack was running for Congress for the first time having served multiple tours in Afghanistan as a civilian intelligence officer.

Polack served as a civilian intelligence official and senior policy advisory in the Bush and Obama administrations. During that time, he worked to shut down Al-Qaida and the Taliban, according to his campaign website. His priorities included health care, climate change and national security.

Gwen Moore was elected to the 4th U.S. House District seat in 2004.