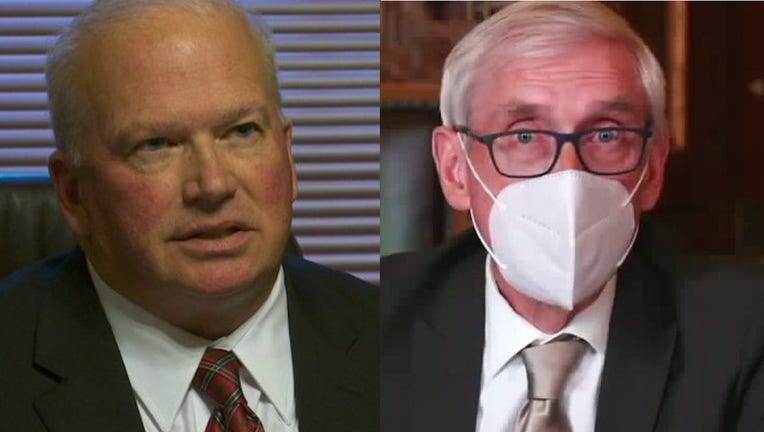 MADISON - The Wisconsin Legislature should act as quickly as this week or next to strike down Gov. Tony Evers' mask mandate, Republican Senate Majority Leader Scott Fitzgerald said on Monday, Aug. 3.

The order from Evers, designed to slow the spread of the coronavirus as cases spike in Wisconsin, took effect on Saturday, Aug. 1. Polls have shown broad support for wearing masks, and Evers said last week that it would be “risky business” — politically and for public health — if Republicans overthrew the order.

But the Legislature has the power to call itself into session to do just that.

Fitzgerald said on WISN-AM radio on Monday that he was talking with Republican Assembly Speaker Robin Vos about overturning the order. Vos also opposes the mandate, but has not said whether the Assembly would come in to vote it down. The Senate and Assembly would have to vote to rescind the order, a move that Evers could not veto.

“Vos and I and our members have to figure out exactly where we’re at on this and if we’re going to do this, we’ve got to do it soon,” Fitzgerald said. “You’re not going to wait around a couple weeks to take action because that makes no sense.”

Vos has not responded to questions about whether Assembly Republicans support striking down the order. Evers did not immediately respond to a request for comment on Fitzgerald’s statements.

Fitzgerald, who is running for Congress and faces a Republican challenger in the Aug. 11 primary, said whether to wear a mask should be an individual's decision. At some campaign events, no one in the room is wearing a mask, while at others, as many as 50% of the people are masked, he said.

“I just said I think it’s a mistake," Fitzgerald said of the mask order. “I think things are going well right now, people are complying if they want to.”

Health officials worldwide agree that wearing masks is an effective way to slow transmission of COVID-19. Many communities in Wisconsin enacted their own mask requirements before Evers issued the statewide order that is slated to run until Sept. 28. More than 30 states have mask mandates in effect.

So far the coronavirus has killed 949 people in Wisconsin and infected more than 55,300, according to the state Department of Health Services. Virus rates that had been trending down into mid-June have since spiked, fueled largely by people in their 20s, state health officials have said.

Fitzgerald and fellow Republican Sen. Steve Nass, of Whitewater, both said Monday they were worried that Evers would order K-12 schools to close this fall, just as he did in March when the virus was first emerging in the state. Teachers' unions want Evers to close schools.

“It’s just not about the mask mandate,” Fitzgerald said. “This is about whether or not he’s going to go after schools next. And if he does that under the emergency declaration, we’ve got to go in there and rescind this order.”

Evers has said he’s leaving the decision on whether to open school for in-person instruction to local districts. Many of the state’s largest school districts, including Milwaukee and Madison, are beginning the academic year with all classes online, while many more rural, smaller districts are returning to the classroom.

With Wisconsin's mask mandate now in effect, the decision has some feeling uneasy due to differing guidelines based on municipality.