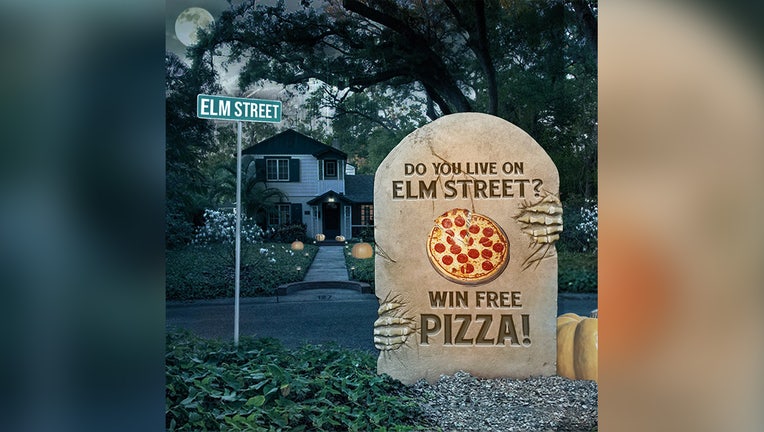 You definitely shouldn’t sleep... on this chance to win free pizza.

Tombstone, which is billing itself as the official pizza brand of Halloween, is offering people a chance to win free pizza — but first, they must brave living on a real-life Elm Street anywhere across the United States, according to a Tombstone spokesperson.

Tombstone will give away free pizzas while supplies last and one lucky winner will win free pizzas for a year.

WATCH FREE ON TUBI: Wes Craven's "The Hills Have Eyes"

The giveaway begins on Oct. 3 through Oct. 31. Residents living on Elm Street — any Elm Street across the U.S. — and wishing to enter the giveaway can do so online.

And for those who may be wondering, "Why Elm Street?" it’s a reference to horror maestro Wes Craven's classic slasher film from the '80s titled, "A Nightmare on Elm Street" starring then-teen heartthrob Johnny Depp, Nancy Thompson and Robert Englund as the horrifying Freddy Krueger.

Thompson’s character, as well as Depp’s, become targets of the spirit of a serial killer (Freddy Krueger) that wields a bladed glove and attacks them in their dreams (more so nightmares). The scariest part is, if Freddy gets them in their sleep, they will die in "real life."

The "Nightmare on Elm Street" franchise birthed 10 movies, including a crossover film in 2003 when "Friday the 13th" antagonist Jason Voorhees and Krueger duke it out in a battle royale.

There is a limit of one entry per person for the giveaway and entrants must be 19 years of age to apply if they are a resident of Alabama or Nebraska and 21 if they are residents of Mississippi. Entrants in all other U.S. states must be 18 years or older.

Get in the mood for spooky season with "Shivers," streaming free on Tubi

One of the first films from groundbreaking body horror auteur David Cronenberg, "Shivers" (also called "They Came From Within," among other titles) includes an unusually direct warning at the end of its trailer: "If this film doesn’t make you scream and squirm, you’d better see a psychiatrist — quick." And honestly, that’s not bad advice. A scientist in a fancy apartment kills a young woman and then himself, a terrifying occurrence that’s only the beginning of the nightmare "Shivers" conjures. It turns out the not-so-good doctor was experimenting with a lethal parasite, one that turns its host into a bloodthirsty, sexually crazed human wrecking ball. Rated R. 87 minutes. Dir: David Cronenberg. Featuring: Paul Hampton, Joe Silver, Lynn Lowry, Allan Kolman, Susan Petrie.

"Shivers" is streaming free on Tubi — get the app

How to watch "A Nightmare on Elm Street"

Wes Craven’s "A Nightmare on Elm Street" is streaming via HBO Max, which offers both an ad-supported subscription ($9.99/month or $69.99/year) and an ad-free tier ($14.99/month or $104.99/year). It’s also available for rental through services like Prime Video and RedBox.

Tubi and this television station are both owned by the FOX Corporation. This story was reported from Los Angeles and Chicago. Allison Shoemaker contributed to this report.