MINNEAPOLIS -- Derek Chauvin, the Minneapolis police officer caught on camera kneeling on the neck of George Floyd as he gasped for air, has been the subject of a 10 conduct complaints and three police shootings that led to no disciplinary action during his 19 years on the job.

Tou Thao, the second officer seen in the video, also has a checkered past that includes allegations of police brutality and a lawsuit.

Together, the men have more than a dozen complaints that have never resulted in any formal reprimands.

Chauvin, an officer who had been praised for valor during his time on the Minneapolis Police Department, was fired from the force on Tuesday, May 26 along with three other officers involved in the incident: Thao, Thomas Lane, and J. Alexander Kueng. 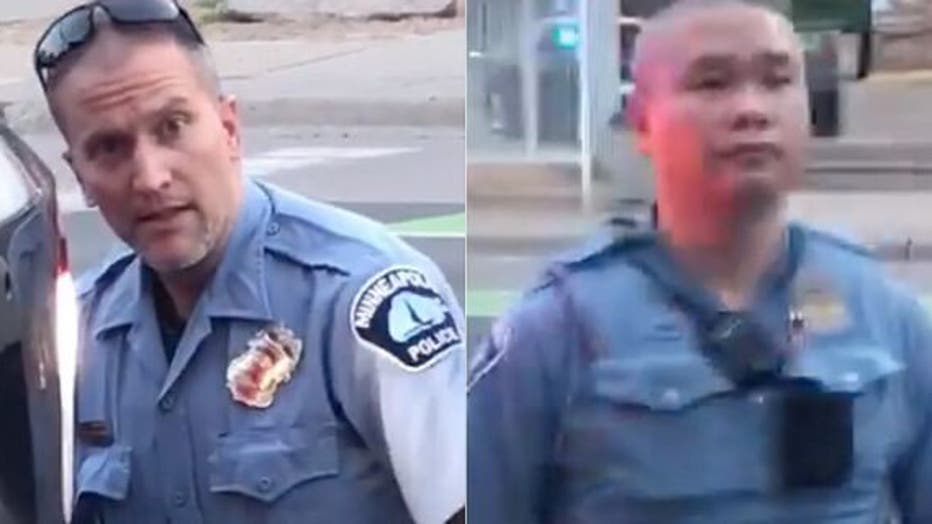 "Why is the man who killed George Floyd not in jail?" Frey asked. "We cannot turn a blind eye, it is on us as leaders to see this for what it is and call it what it is."

A deeper look into Chauvin's police record shows a man with a history of questionable behavior who was never formally reprimanded for his actions even though they might have merited it.

Chauvin joined the Minneapolis Police Academy in October 2001 and has had use-of-force incidents as well as one lawsuit related to allegations he violated a prisoner's federal constitutional rights.

In 2006, he was one of five officers who responded to a stabbing at the home of Wayne Reyes, a man police claimed stabbed his friend, his girlfriend, and then threatened to kill them all with a shotgun. According to reports, police pursed Reyes, who got in his truck and fled. When he got out of the vehicle with the shotgun in his hand, officers fired several shots at Reyes, killing him.

According to NBC News, it was unclear which officer shot first. All five were put on paid leave while the incident was investigated.

Later that same year, officers were responding to a domestic call when Chauvin claimed the man reached for his gun. The man was shot and wounded, though not by Chauvin. Authorities later determined none of the officers had acted inappropriately.

Chauvin has also been the subject of three reviews from the Civilian Review Authority in which he was found to have used "demeaning tone, sustained," "derogatory language, sustained," and "language-other, sustained."

He's also been the subject of seven reviews by the local Office of Police Conduct which all concluded the reviews had been "Closed- No discipline."

Thao, the second officer seen in the video of Floyd's death, is a 10-year veteran of the force. Thao has been sued by a man who alleged Thao and two officers used excessive force during a 2014 arrest. According to the lawsuit, Thao brutally beat up a handcuffed man during an arrest before escorting him to jail in only his underwear and a T-shirt.

A lawsuit stemming from the incident, which was eventually settled out of court, alleged Thao and another officer punched and kneed the man's face and body, which resulted in broken teeth as well as other trauma and bruising.

The shocking death of Floyd in Minneapolis has led to widespread protests and calls for the officers to be held accountable for their actions on Monday night. In the video, Thao is seen standing guard and trying to keep bystanders at bay while Chauvin presses his knee on Floyd's neck for several minutes before Floyd goes limp.

The officers were first put on paid leave but that quickly changed to an outright firing.