WAUWATOSA -- Pick 'n Save in Wauwatosa hosted a celebrity relay race on Tuesday, Nov. 5 to promote the 22nd annual “Stuff the Bus” campaign for Feeding America Eastern Wisconsin. The campaign is aimed at stuffing a Milwaukee County Transit System bus with food donations for the holidays.

Tuesday's race included on-air personalities from 99.1 the Mix, WISN 12, CBS 58 and FOX6 News, as well as some off-air personnel and Packers legend LeRoy Butler. The relay race involved two-person teams racing to stuff bags full of canned goods and other non-perishable food items as quickly as possible. FOX6's Bryan Polcyn was paired up with David Stein, producer for the “Elizabeth & Radar” show on 99.1 the Mix. 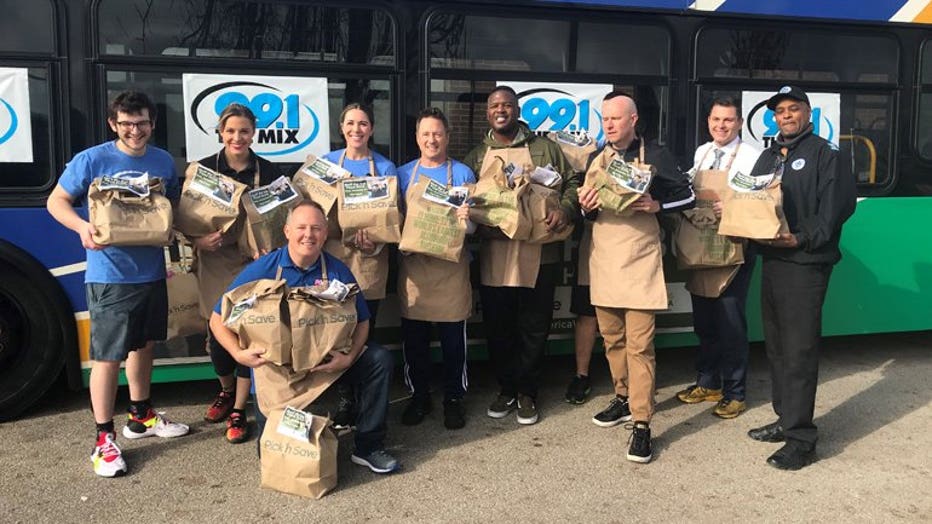 All five teams tied the initial race with four fully stuffed and stapled bags. Organizers say that is the first time that's happened.

To break the tie, Scott Marshall of Feeding America Eastern Wisconsin had one member of each team run a simple foot race up-and-back through four grocery store aisles. After talking, Polcyn decided Stein should run our leg since he is younger, faster and was wearing shorts. During the final leg of the tie-breaking race, the runners encountered an unexpected obstacle -- a cart full of boxes ready to be stocked on the shelves was blocking the path. Stein slipped around the cart -- and brought the "FOX6/99.1 the Mix" team home the victory.