Fox 5's Perris Jones has the latest details on what led up to the death of Dwayne Haskins, and how the world is reacting to the tragedy.

Dwayne Haskins Jr., a quarterback for the Pittsburgh Steelers, who was formerly drafted by the Washington Commanders has died, according to authorities. 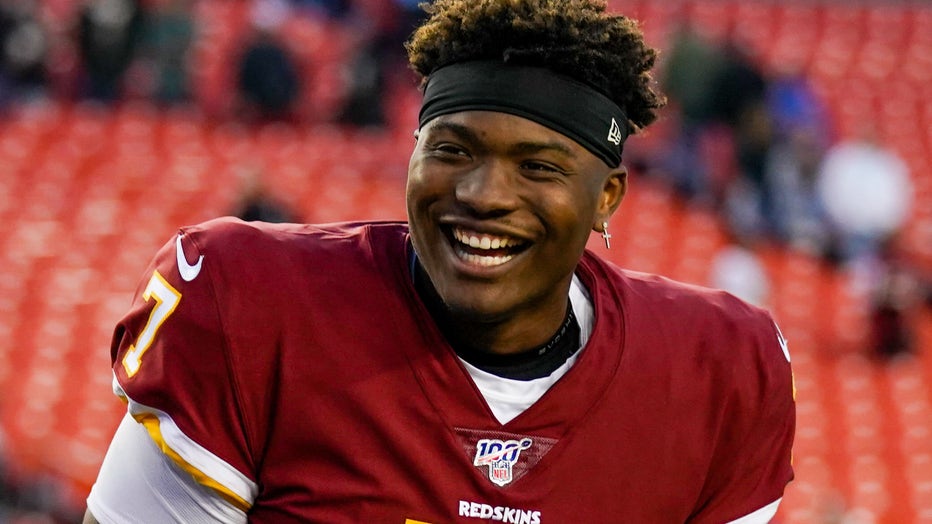 LANDOVER, MD - DECEMBER 22: Washington Redskins Quarterback Dwayne Haskins (7) laughs with teammates following the game between the New York Giants and the Washington Redskins on December 22, 2019 at FedExField in Landover, Maryland. (Photo by Nicole

Florida Highway Patrol officials say Haskins was hit and killed along a Broward County highway in south Florida around 6:37 a.m. Saturday. Investigators say Haskins was trying to cross the westbound lanes of that highway for unknown reasons, when he was hit by an oncoming dump truck. Haskins was pronounced dead at the scene.

Schefter reports that Haskins was in South Florida training with other Steelers players.

Dwayne Haskins was a standout quarterback at Ohio State University, whose talents led him to being drafted by the Washington Commanders in the first round of the 2019 draft.

He spent two years with the franchise, before signing with the Pittsburg Steelers in 2021.

Before his time in the national spotlight, Haskins attended high school at the Bullis School in Potomac, Maryland. He graduated from the school in 2016.

In response to the news, the owners and head coach of the Washington Commanders both released statements expressing their devastation about the tragedy.

Co-owners Dan and Tanya Snyder released a statement on Twitter, reading in part:

"We are devastated to hear the news of the tragic passing of Dwayne Haskins Jr. He was a young man with a tremendous amount of potential who had an infectious personality. To say we are heartbroken is an understatement."

"I am absolutely heartbroken to hear the news of the passing of Dwayne Haskins Jr. Dwayne was a talented young man who had a long life ahead of him. This is a very sad time and I am honestly at a loss for words."

The Pittsburgh Steelers, the team that Haskins was currently signed to, also released a statement via head coach Mike Tomlin.

The Bullis School released a statement to Fox 5 in response to the tragedy. The statement from Head of School, Christian G. Sullivan reads in part:

"It is with profound sadness that the Bullis community recently learned that Dwayne Haskins, Class of 2016, tragically passed away this morning in South Florida. The community, former Head of School Dr. Gerald Boarman and I send our sincerest condolences to his parents, Dwayne Sr. and Tamara, and his sister, Tamia, Class of 2019. We are so deeply sorry for their loss. Dwayne was known as a standout athlete at Bullis, Ohio State, and in the NFL, and here at Bullis we also knew him as an honorable, smart, and family-oriented young man who graduated from college in three years. His loss will be felt deeply by so many people."

This is a developing story. Stay with Fox 5 for updates.