One week after 10 members of an Afghan girls robotics team were evacuated to Qatar, four former members arrived safely in Mexico. (Credit: @SREMX via Storyful)

MEXICO CITY - Former members of an all-girls robotics team known as the Afghan Dreamers have safely been evacuated from Afghanistan amid the Taliban takeover of the country.

According to the Digital Citizen Fund (DCF), the team's parent organization, four girls arrived in Mexico on Aug. 24. Last week, 10 other girls were safely evacuated to Doha, Qatar.

"Digital Citizen Fund and I are pleased to announce that several former members of my Afghan Girls Robotics team have arrived safely in Mexico," DCF executive Elizabeth Schaeffer Brown said in a statement. "For the safety and security of others, I will not share details of their travels or whereabouts, but I can report to you that these girls are safe and they are well."]

Established in 2017, the Afghan Dreamers gained notoriety by winning a medal for "courageous achievement" at a competition in Washington that same year. They also compete in Qatar in 2019, which made a lasting impression on Qatari officials.

Throughout the COVID-19 pandemic, the girls have worked on constructing low-cost ventilators that can be assembled using old car parts.

Brown said the four girls taken to Mexico were a part of her original robotics team from Herat and that they competed on the robotics and STEM educational programs. 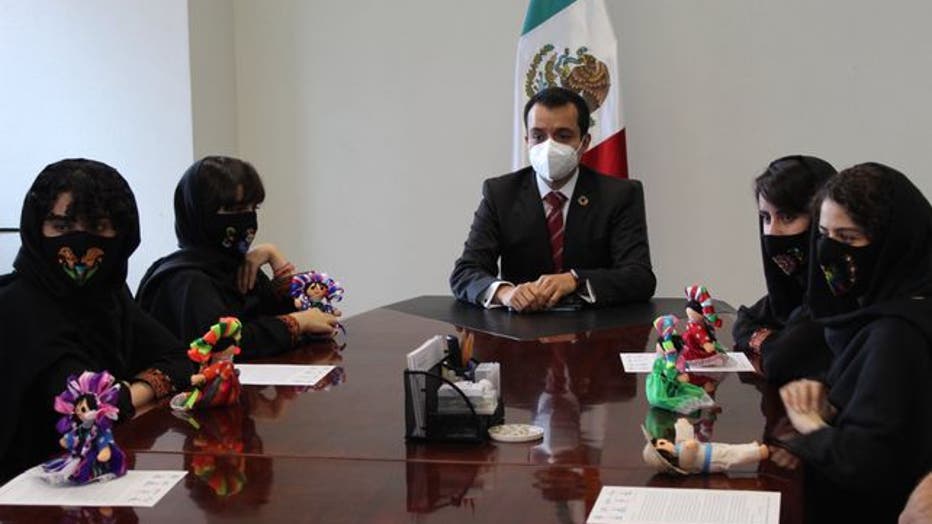 According to the Digital Citizen Fund (DCF), the team's parent organization, four girls arrived in Mexico on Aug. 24. (Credit: @SREMX via Storyful)

But the Taliban has historically frowned on the idea of educating women and girls. In their previous regime, centered around their ultra-conservative interpretation of Sharia Law, the Taliban enacted policies that restricted women’s clothing, barred them from aspects of public life and didn’t permit girls to attend schools.

Since assuming power last week, the Taliban has presented itself as more moderate than its predecessor. Zabihullah Mujahid, the Taliban's longtime spokesman, promised the Taliban would honor women’s rights within the norms of Islamic law. He did not elaborate on exactly what that would mean.

Mexico’s Department of Foreign relations facilitated diplomatic and consular efforts to grant the girls safe passage to the country after receiving calls from organizations concerned about the young women’s safety.

"The human cause, the protection of values and the causes that identify us and Mexicans today have made us commit ourselves so that they are in Mexico," Foreign Minister Marcelo Ebrard said in a statement.

Officials said an organization has offered the girls accommodations, food and basic services free of charge.

One of the young women, Fatemah, told reporters the reason why they chose Mexico was that they consider it a country with freedom and solidarity.

She touted the team’s work to highlight women’s achievements internationally as well as promote women’s access to science and technology in Afghanistan.

"It makes us nervous that it is precisely these achievements that now put our families in danger," she said.