Two Florida men found a bone from an animal that roamed the Earth millions of years ago.

ORLANDO, Fla. - Two Florida men found a bone from an animal that roamed the Earth millions of years ago.

One quick look and it’s clear this isn’t your average fossil.

"Henry is my dive buddy. He yelled out to me, said, ‘Hey, Derek. I found something!’ Oh my goodness!' It was really, really cool," said Seminole State Planetarium Director Derek Demeter.

Demeter and his friend found a four-foot-long, 50-pound mammoth bone while scuba diving in Southwest Florida earlier this week.

They believe it’s the femur, or thigh bone, of a mammoth and dates back to the Ice Age somewhere between 2.5 million years ago and 10,000 years ago. The fossil’s actual age is hard to tell. 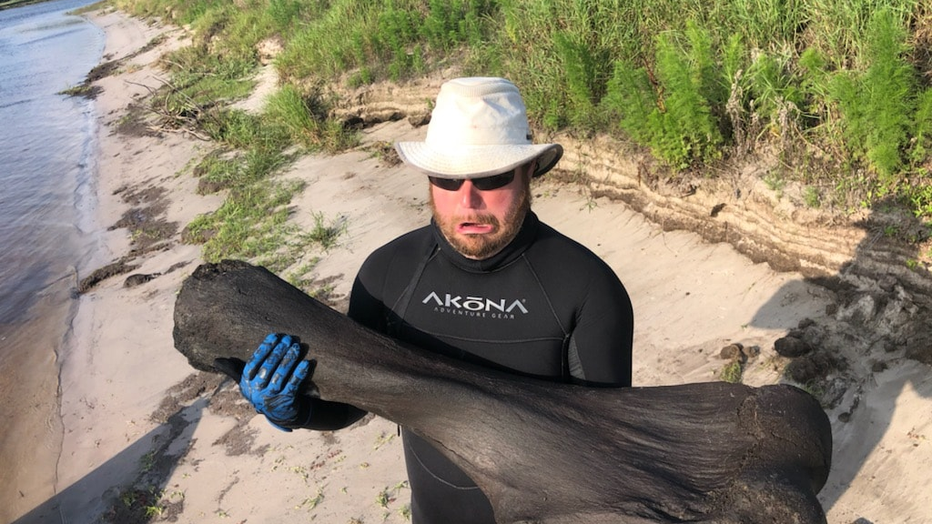 "This one’s much more dense, so we kind of think it’s somewhere in the middle. Probably 100,000 years old," Demeter said.

It's bone likes this that keeps these guys diving and digging throughout Florida. That same day, they also found parts of an extinct shark and the tip of a prehistoric saber-tooth tiger.

"The thing I love about it is just like astronomy, it’s time traveling. It plays with the imagination so you go ‘Wow, what was going on at this time?’"

Demeter says the bone was pretty well preserved because they found it protected under the sand.

Now, it’ll sit in his friend’s middle school classroom so they can educate the kids.

"It brings us joy to know that we can uncover stuff that really gets people excited."