WASHINGTON — If she could spend the holidays anywhere in the world, Melania Trump says she'd take her family to a deserted, tropical island.

The first lady revealed her wish Thursday during a Christmastime visit with patients and staff at Children's National hospital in the nation's capital as she continued a holiday tradition begun more than 60 years ago by first lady Bess Truman.

After touring the neuroscience center and meeting privately with some patients, Mrs. Trump was escorted by Santa Claus to the atrium where she took a seat in front of a large Christmas tree and fielded a handful of questions from children and patients.

Ten-year-old Andy asked the first lady where she would spend the holidays if she could go anywhere in the world. Her answer prompted laughter.

"I would spend my holidays on a deserted island, tropical island with my family," she said.

Her favorite Christmas song is "O Holy Night." Her favorite family Christmas tradition is eating dinner on Christmas Eve before they attend midnight Mass or worship services on Christmas Day, followed by another family dinner. "On the 25th, Santa comes. We open the presents and spend time together." 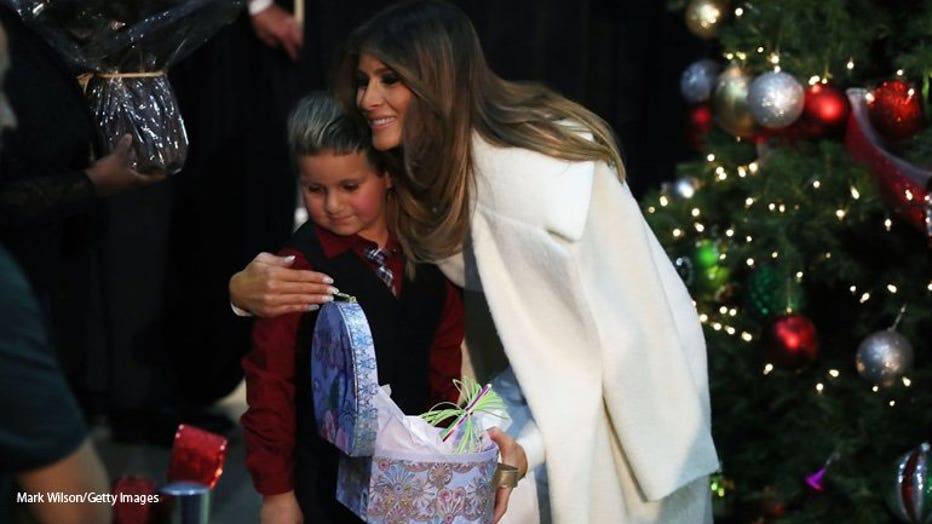 WASHINGTON, DC - DECEMBER 07: First lady Melania Trump hugs Damian Contreras during a visit to Children's National Medical Center, on December 7, 2017 in Washington, DC. First ladies dating back to Jacqueline Kennedy have made the annual visit to the

"Healthy food" is her favorite thing to eat for Christmas dinner. "You feel very good after. Not too much eating," she said. "The most important part is to spend time with the family."

So what does she want from Santa for Christmas?

"I asked Santa for Christmas, uh, peace on the world, health love and kindness," the first lady said.

Before greeting audience members and departing, Mrs. Trump read "The Polar Express," a story about a doubting boy who hops a train ride to the North Pole.

She later tweeted about the "fun questions from the kids @childrenshealth."

It was not Mrs. Trump's first visit to Children National. She visited earlier in the year to help prepare a "healing garden" for patients that she helped dedicate on a follow-up visit.