WASHINGTON — First lady Melania Trump cut the ribbon Thursday as the Washington Monument reopened to the public for the first time in three years.

The 555-foot stone obelisk closed in September 2016 to replace the aging elevator and upgrade security systems.

Accompanied by a group of local fourth-graders, the first lady took the new high-speed elevator to the observation floor near the top, which offers a commanding 360-degree view of the entire District of Columbia.

The monument has been closed off and on for most of the past eight years. An August 2011 earthquake left cracks in the stones near the top of the obelisk. It reopened in 2014 but National Park Service officials were forced to close it again two years later after a series of elevator breakdowns.

"This is one of the most distinctive buildings in the world and one of the signature attractions of any visit to Washington," said Jeff Reinbold, superintendent of the National Mall for the National Park Service. "So we really didn't want to close it. We kept putting Band-Aids on, but eventually we had no choice."

With the closure already necessary, officials took the opportunity to build a completely new high-tech security screening facility. All told the project cost $12 million — $3 million for the elevator and the rest for the security center.

The new facility juts like a grey cube from the base of the marble obelisk. Inside, visitors find literally gleaming new machinery and automated bank-vault type doors blocking the way to the elevator.

NPS Spokesman Mike Litterst said the previous security system was hastily arranged in the aftermath of the 9/11 attacks. He recalled a more innocent pre-9/11 time when visitors were hardly screened at all and overnight security consisted of "a couple of alarms and two iron gates that we locked at night."

After such a long closure, anticipation is high among both staffers and visitors. Tickets for Thursday sold out in an hour, Reinbold said. For the remainder of September, the monument is extending its visiting hours from 9 a.m. to 9 p.m. to accommodate the demand. However, they are also limiting the number of tickets as staffers continue to adapt to the new equipment. 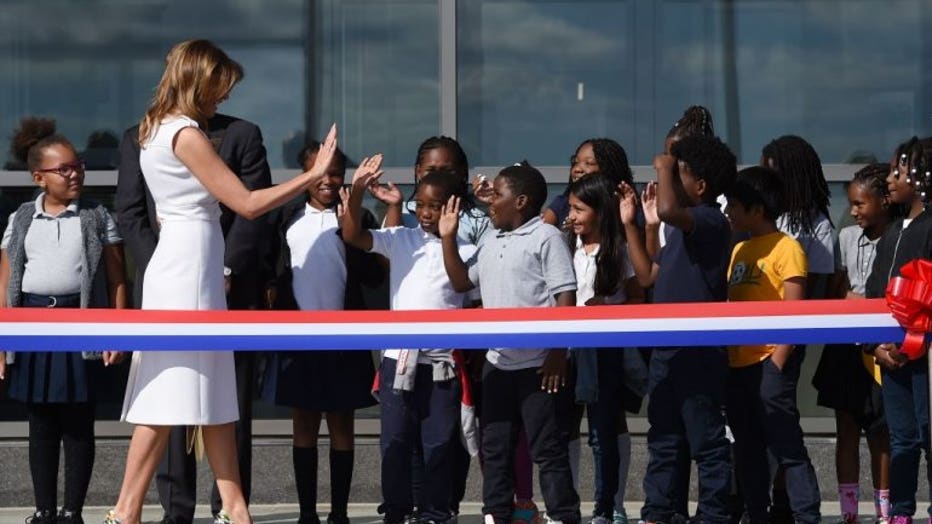 US First Lady Melania Trump greets 4th graders from Amidon-Bowen Elementary school during the reopening of the Washington Monument on the National Mallon September 19, 2019 in Washington, DC. (Photo by Olivier Douliery / AFP)

"We'll keep ramping (the number of visitors) up as we get used to the facility," Reinbold said.

Starting in October the monument will revert to its normal 9 a.m. to 5 p.m. schedule. For now, tickets must be purchased in person; Reinbold said they would soon begin offering about half of any given day's tickets online.

Construction on the monument began in 1848 and took nearly 40 years to complete. The private organization that was running the project ran out of funding and construction was halted in 1854 at around 150 feet; that delay was exacerbated by the Civil War.

Construction resumed in 1879, but builders were forced to use stone from a different quarry — giving the obelisk its distinctive two-tone color.