The Federal Reserve launched a high-risk effort to tame the worst inflation since the 1970s, raising its benchmark short-term interest rate and signaling potentially up to seven rate hikes this year.

WASHINGTON - The Federal Reserve launched a high-risk effort Wednesday to tame the worst inflation since the early 1980s, raising its benchmark short-term interest rate and signaling up to six additional rate hikes this year.

The Fed's quarter-point hike in its key rate, which it had pinned near zero since the pandemic recession struck two years ago, marks the start of its effort to curb the high inflation that followed the recovery from the recession. The rate hikes will eventually mean higher loan rates for many consumers and businesses.

The central bank's policymakers expect inflation to remain elevated, ending 2022 at 4.3%, according to quarterly projections they released Wednesday. That's far above the Fed's 2% annual target. The officials also now forecast much slower economic growth this year, of 2.8%, down from a 4% estimate in December.

Under Chair Jerome Powell, the Fed is hoping that the rate hikes will achieve a difficult and narrow objective: Raising borrowing costs enough to slow growth and tame high inflation, yet not so much as to topple the economy into recession.

But many economists worry that with inflation already so high — it reached 7.9% in February, the worst in four decades — and with Russia’s invasion of Ukraine driving up gas prices, the Fed may have to raise rates even higher than it now expects and potentially cause a recession. 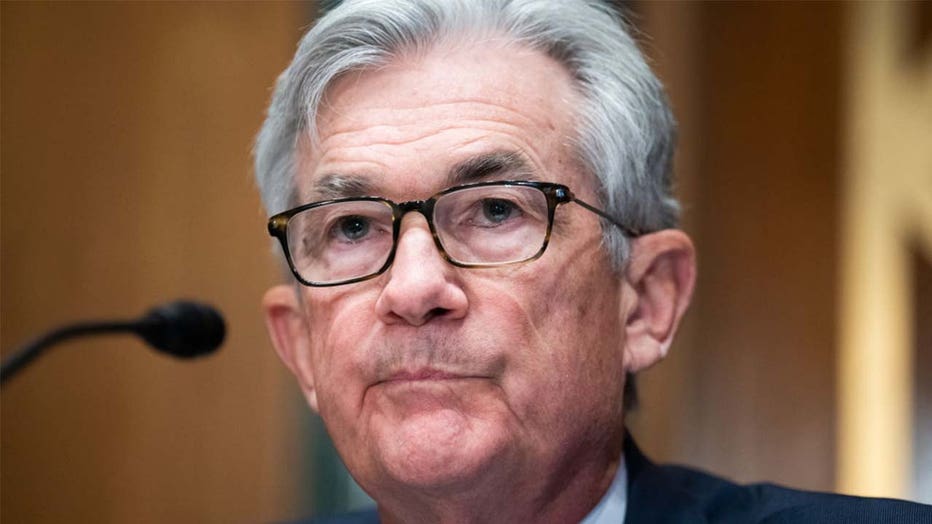 By its own admission, the central bank underestimated the breadth and persistence of high inflation after the pandemic struck. And many economists say the Fed has made its task riskier by waiting too long to begin raising rates.

Speaking at a news conference Wednesday, Powell said he believed the economy remains sturdy enough for the Fed to carry out a series of rate hikes without causing a downturn.

"All signs are that this is a strong economy," he said, "one that will be able to flourish in the face of less accommodative monetary policy."

The Fed's forecast for numerous additional rate hikes in the coming months initially disrupted a strong rally on Wall Street, weakening stock gains and sending bond yields up. But stock prices more than recovered their gains soon after Powell began his news conference and suggested that the Fed would remain flexible in its approach to rate hikes.

Most economists say that sharply higher rates are long overdue to combat the escalation of inflation across the economy.

"With the unemployment rate below 4%, inflation nearing 8%, and the war in Ukraine likely to put even more upward pressure on prices, this is what the Fed needs to do to bring inflation under control," said Mike Fratantoni, chief economist at the Mortgage Bankers Association.

In a statement it issued after its latest policy meeting, the Fed noted that Russia's invasion of Ukraine and ensuing sanctions by the West "are likely to create additional upward pressure on inflation and weigh on economic activity."

Powell is steering the Fed into a sharp U-turn. Officials had kept rates ultra-low to support growth and hiring during the recession and its aftermath. As recently as December, Fed officials had expected to raise rates just three times this year. Now, its projected seven hikes would raise its short-term rate to between 1.75% and 2% at the end of 2022. It could increase rates by a half-point at future meetings.

On Wednesday, the officials also forecast four more rate hikes in 2023, which would boost its benchmark rate to 2.8%. That would be the highest level since March 2008. Borrowing costs for mortgage loans, credit cards and auto loans will likely rise as a result.

One member of the Fed’s rate-setting committee, James Bullard, head of the Federal Reserve Bank of St. Louis, dissented from Wednesday’s decision. Bullard favored a half-point rate hike, a position he has advocated in interviews and speeches.

The Fed also said it would begin to reduce its nearly $9 trillion balance sheet, which has more than doubled in size during the pandemic, "at a coming meeting." That step will also have the effect of tightening credit for many consumers and businesses.

Since its last meeting in January, the challenges and uncertainties for the Fed have escalated. Russia’s invasion has magnified the cost of oil, gas, wheat and other commodities. China has closed ports and factories again to try to contain a new outbreak of COVID, which will worsen supply chain disruptions and likely further fuel price pressures.

In the meantime, the sharp rise in average gas prices since the invasion, up more than 60 cents to $4.31 a gallon nationally, will send inflation higher while also probably slowing growth — two conflicting trends that are notoriously difficult for the Fed to manage simultaneously.

The economy’s steady expansion does provide some cushion against higher rates and more expensive gas. Consumers are spending at a healthy pace, and employers keep rapidly hiring. There are still a near-record 11.3 million job openings, far outnumbering the number of unemployed.

In contrast to some analysts, Jason Pride, an investment officer at Glenmede, said he thought Russia’s invasion might lead the Fed to adopt a relatively go-slow approach.

"The war in Eastern Europe is unlikely to halt the Fed’s tightening plans, but it may prompt caution on the speed of rate hikes as the economic effects of the conflict become better understood," Pride said.