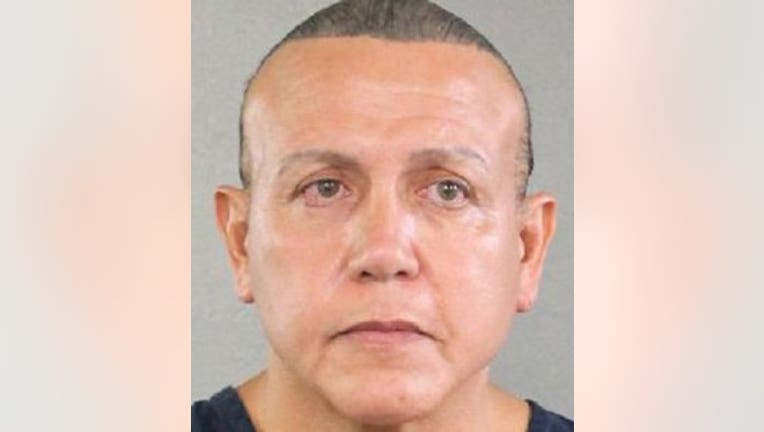 WASHINGTON — The head of the FBI says the suspect arrested in the mail bombs sent to prominent Democrats was found in part using fingerprint evidence and possible DNA.

FBI Director Christopher Wray said Friday investigators had fingerprints of Florida resident Cesar Sayoc and had possible DNA collected from two explosive devices. Wray says they matched a fingerprint found on one of the packages that had been sent to U.S. Rep. Maxine Waters of California.

Sayoc was arrested Friday at an auto shop in Plantation, Florida. He has been charged with five crimes and faces 58 years in prison. He will be prosecuted in New York, where five of the 12 devices were found. 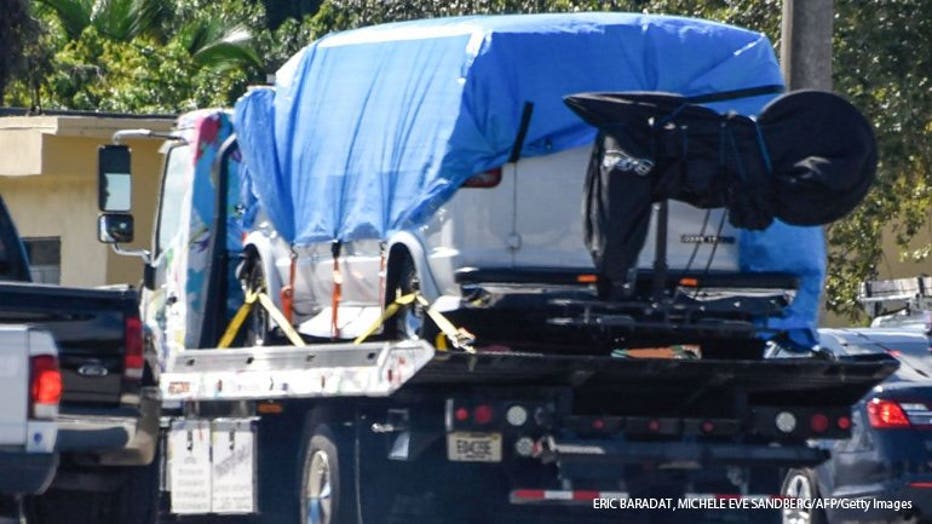 A van covered in blue tarp is towed by FBI investigators on October 26, 2018, in Plantation, Florida, in connection with the 12 pipe bombs and suspicious packages mailed to top Democrats. - A suspect identified by investigators as Cesar Sayoc, 56, wa

The mail bombs have been sent in recent days to political opponents of President Donald Trump.

Court records show Sayoc has a history of arrests.

Law enforcement officers were seen on television examining a white van, its windows covered with an assortment of stickers, in the city of Plantation in the Miami area. Authorities covered the vehicle with a blue tarp and took it away on the back of a flatbed truck. 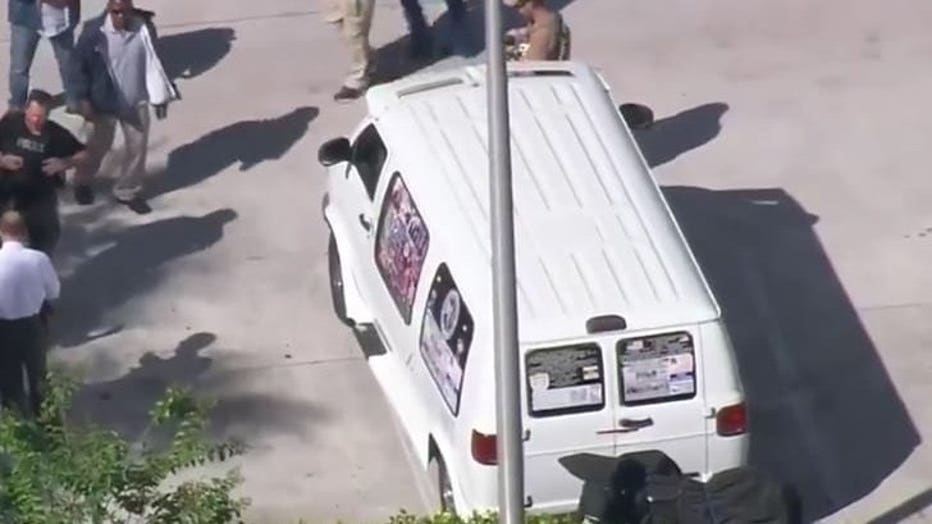 The stickers included images of American flags and what appeared to be logos of the Republican National Committee and CNN, though the writing surrounding those images was unclear. 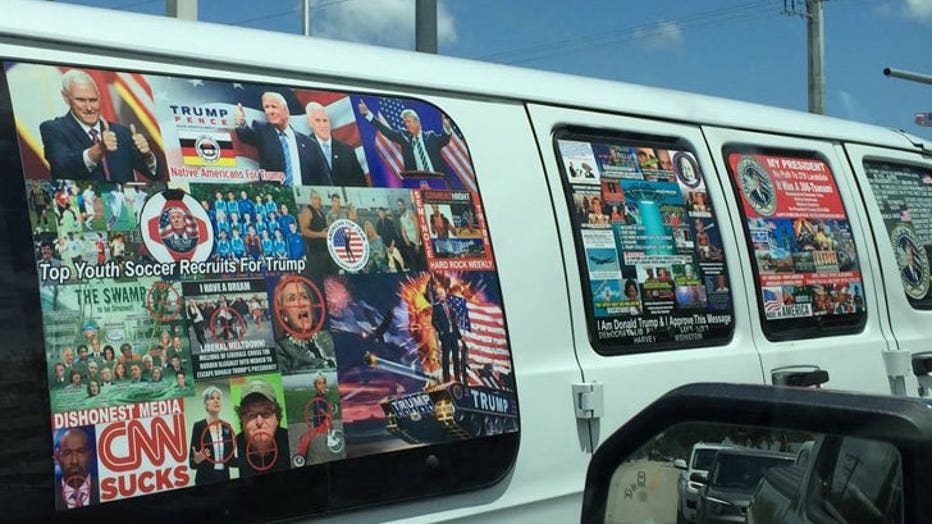 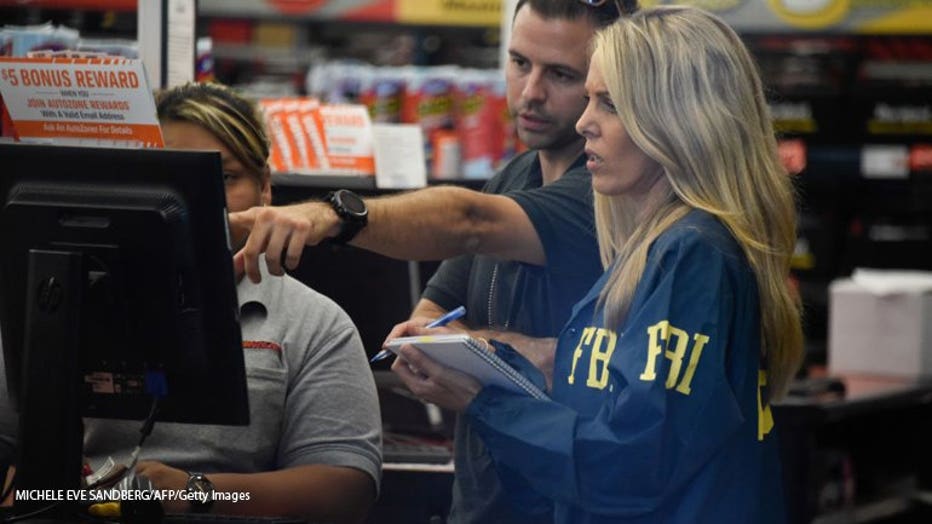 FBI agents search for clues and evidences at the Auto Zone Store in Plantation, North of Miami, on October 26, 2018 where a suspect was arrested in connection with the 12 pipe bombs and suspicious packages recently mailed to top Democrats. - The susp

President Donald Trump spoke about the investigation at a youth summit on Friday morning.

The development came amid a coast-to-coast manhunt for the person responsible for a series of explosive devices addressed to Democrats including former President Barack Obama, former Vice President Joe Biden and Hillary Clinton.

Law enforcement officials said they had intercepted a dozen packages in states across the country. None had exploded, and it wasn't immediately clear if they were intended to cause physical harm or simply sow fear and anxiety.

Investigators believe the mailings were staggered. The U.S. Postal Service searched their facilities 48 hours ago and the most recent packages didn't turn up. Officials don't think they were sitting in the system without being spotted. They were working to determine for sure. The officials spoke to The Associated Press on condition of anonymity to discuss an ongoing investigation.

The FBI said the package to Booker was intercepted in Florida. The one discovered at a Manhattan postal facility was addressed to Clapper at CNN's address. An earlier package had been sent to former Obama CIA Director John Brennan via CNN in New York.

Attorney General Jeff Sessions said Friday the Justice Department was dedicating every available resource to the investigation "and I can tell you this: We will find the person or persons responsible. We will bring them to justice."

President Trump, on the other hand, complained that "this 'bomb' stuff" was taking attention away from the upcoming election and said critics were wrongly blaming him and his heated rhetoric.

Investigators were analyzing the innards of the crude devices to reveal whether they were intended to detonate or simply sow fear just before Election Day.

Law enforcement officials told The Associated Press that the devices, containing timers and batteries, were not rigged to explode upon opening. But they were uncertain whether the devices were poorly designed or never intended to cause physical harm.

Most of those targeted were past or present U.S. officials, but one was sent to actor Robert De Niro and billionaire George Soros. The bombs have been sent across the country - from New York, Delaware and Washington, D.C., to Florida and California, where Rep. Maxine Waters was targeted. They bore the return address of Florida Rep. Debbie Wasserman Schultz, the former chairwoman of the Democratic National Committee.

The common thread among the bomb targets was obvious: their critical words for President Trump and his frequent, harsher criticism in return.

President Trump claimed Friday he was being blamed for the mail bombs, complaining in a tweet sent before dawn: "Funny how lowly rated CNN, and others, can criticize me at will, even blaming me for the current spate of Bombs and ridiculously comparing this to September 11th and the Oklahoma City bombing, yet when I criticize them they go wild and scream, 'it's just not Presidential!'"

The package to Clapper was addressed to him at CNN's Midtown Manhattan address. Clapper, a frequent President Trump critic, told CNN that he was not surprised he was targeted and that he considered the actions "definitely domestic terrorism."

Jeff Zucker, the president of CNN Worldwide, said in a note to staff that all mail to CNN domestic offices was being screened at off-site facilities. He said there was no imminent danger to the Time Warner Center, where CNN's New York office is located.

At a press conference Thursday, officials in New York would not discuss possible motives or details on how the packages found their way into the postal system. Nor would they say why the packages hadn't detonated, but they stressed they were still treating them as "live devices."

The devices were packaged in manila envelopes and carried U.S. postage stamps. They were being examined by technicians at the FBI's forensic lab in Quantico, Virginia.

The packages stoked nationwide tensions ahead of the Nov. 6 election to determine control of Congress — a campaign both major political parties have described in near-apocalyptic terms. Politicians from both parties used the threats to decry a toxic political climate and lay blame.

President Trump, in a tweet Thursday, blamed the "Mainstream Media" for the anger in society. Brennan responded, tweeting that President Trump should "Stop blaming others. Look in the mirror."

The bombs are about 6 inches (15 centimeters) long and packed with powder and broken glass, according to a law enforcement official who viewed X-ray images. The official said the devices were made from PVC pipe and covered with black tape.