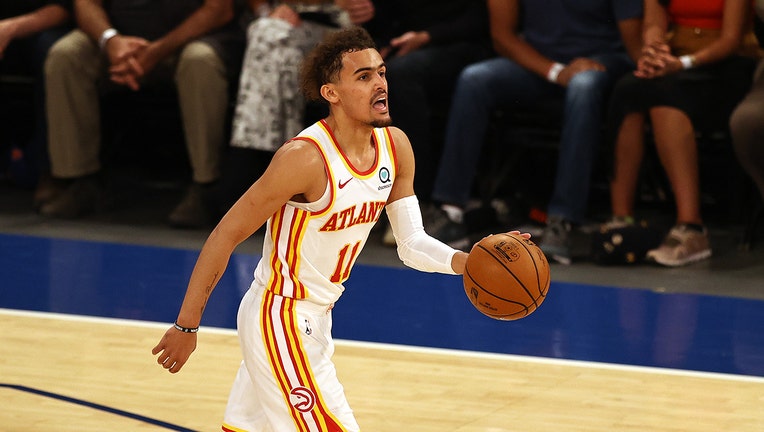 Trae Young #11 of the Atlanta Hawks calls out the play in the third quarter against the New York Knicks during game two of the Eastern Conference Quarterfinals at Madison Square Garden on May 26, 2021 in New York City.(Photo by Elsa/Getty Images)

NEW YORK - The New York Knicks say they have banned a fan from the stadium after a video showed him spitting on NBA player Trae Young at Wednesday night's game.

In a statement, the Knicks said:  "He is now banned from The Garden indefinitely.  We apologize to Trae and the entire Atlanta Hawks organization for this fan's behavior."

The team did not release the man's name but says it has turned information on the case to "the appropriate authorities."

Fans in New York directed profane chants at the Atlanta guard all night, just as they had in the series opener there on Sunday.

Game 3 is Friday night in Atlanta.

The NBA said Thursday that its rules on fan behavior will be "vigorously enforced in order to ensure a safe and respectful environment for all involved."

"The return of more NBA fans to our arenas has brought great excitement and energy to the start of the playoffs, but it is critical that we all show respect for players, officials and our fellow fans," the NBA said Thursday.

NBA buildings are welcoming their largest crowds of the season for the playoffs, after a regular season where attendance was severely limited because of policies put in place to keep players and others safe during the pandemic.