ALAMEDA, Calif. - The family of an unarmed 26-year-old Alameda man is struggling to understand how a minor confrontation with police led to his death on the same day a jury in Minneapolis began considering similar circumstances in the George Floyd case, while experts said that officers have long been trained not to handcuff people, especially when they are heavy or intoxicated, face-down on the ground.

Alameda police responded to a park on April 19 to check reports that Mario Gonzalez was acting strangely and appeared to be breaking security tags off of alcohol bottles that he had in two drugstore baskets.

Gonzalez died after three officers and a civilian parking enforcement employee pinned him face down on the ground for more than five minutes, according to body camera video made public this week by police amid three separate investigations. An attorney for the officers said they did nothing wrong.

Police said Gonzalez had a medical emergency while in an altercation with officers.

But his brother, Geraldo Gonzalez, told The Associated Press in an interview Wednesday that the video "presented a story that was really different.

"The medical emergency that they’re talking about was induced by three officers on his back," he said.

The brother added that Gonzalez liked to get away from their neighborhood in east Oakland — where gang shootings, robberies and murders are common — and go to nearby Alameda, a city on an island with beautiful homes, tree-lined streets and many parks. 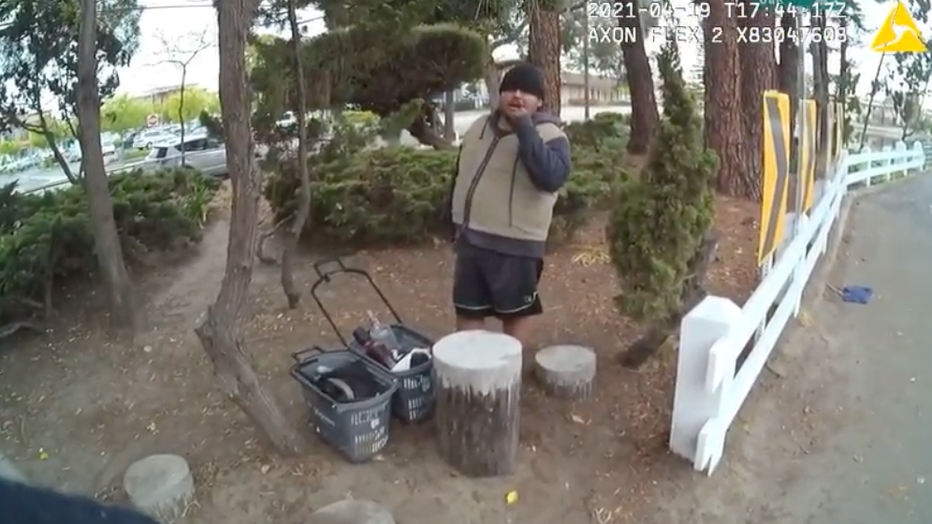 Gonzalez stopped breathing in a park at the end of a cul-de-sac of well-kept homes with manicured gardens.

The video shows that one officer put an elbow on his neck and a knee on his shoulder, while another appeared to put a knee on his back and leave it there for about four minutes as Gonzalez gasped for air, saying, "I didn’t do nothing, OK?"

The union representing Alameda police officers did not respond to a request for comment but Alison Berry Wilkinson, an attorney representing the officers, told KTVU in Oakland that they "used the lowest degree of force possible given the intensity of Mr. Gonzalez’s efforts to evade their grasp."

Gonzalez seemed intoxicated and disoriented and the officers were concerned he would fall, she said.

One officer put a knee on his back but only as a "balance point," Wilkinson said.

"There was never a point in time where any officer’s knee was on Mr. Gonzalez’s neck. Nor was there a time when they were pressing down hard enough on his body to cause him not to breathe," Wilkinson said.

All three officers are on administrative leave. The city identified them Wednesday as Officer James Fisher, who has been with the Alameda Police Department since 2010, and Cameron Leahy and Eric McKinley who joined in 2018. The city said Civilian Parking Enforcement employee Charlie Clemmens was also involved. 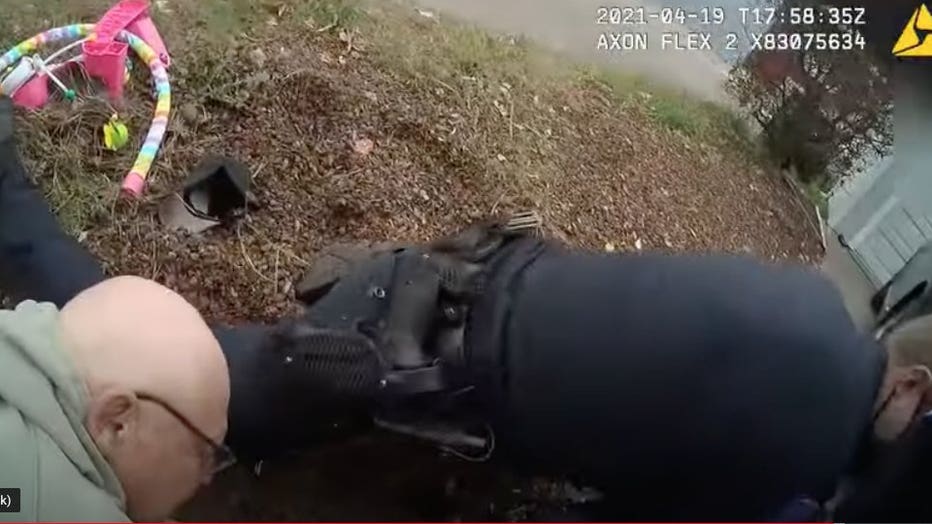 Civilian parking enforcement employee Charlie Clemmens was also involved in the deadly struggle with Mario Gonzalez on April 19, 2021 and is also on leave.

The death is under investigation by the Alameda County Sheriff’s Department, the district attorney’s office and a former San Francisco city attorney hired by Alameda to lead an independent probe. All four have now been interviewed by both the sheriff’s and district attorney’s investigators, the city said.

Gonzalez died hours before the case against former Minneapolis police Officer Derek Chauvin went to the jury. The next day, Chauvin was convicted of murder and manslaughter for pinning Floyd to the pavement with his knee on the Black man’s neck in a case that touched off a national reckoning over racism and police brutality.

As with Floyd, officers are routinely trained not to restrain people the way they did Gonzalez, said multiple use-of-force experts who viewed the video at the AP’s request.

"Officers have been instructed to not keep handcuffed subjects prone (face-down) and to instead roll them onto their sides for going on 30 years," said Seth Stoughton, who teaches criminology and criminal justice at the University of South Carolina.

In this case, one officer recognized the danger, asking shortly before Gonzalez stopped breathing if they should roll him on his side. The other refuses, saying he doesn’t want to lose his grip.

That was their fatal mistake, experts said.

"Once they’re controlling him, as we learned from the Floyd trial with all those medical experts, this position or compression is deadly," said Geoffrey Alpert, a professor of criminology at the University of South Carolina and an expert on police use of force.

Moreover, officers are trained to take particular care with those like Gonzalez who may be especially vulnerable because of their body weight, intoxication or other factors, said Ed Obayashi, a use-of-force consultant to law enforcement agencies and a deputy sheriff and legal adviser for the Plumas County, California, sheriff’s office.

Gonzalez weighed about 250 pounds and police said he appeared to be under the influence.

Interim Alameda Police Chief Randy Fenn told KTVU-TV said the video was "troubling" and offered his condolences to Gonzalez’s family. But he urged people to withhold judgment pending the results of a full investigation into the death.

"We don’t even know the cause of death right now," he said. "Video only tells part of the story, so we need the entire investigation to understand whether or not the actions were legal, consistent with training and within policy."

Gonzalez had a 4-year-old son, also named Mario, and was the main caretaker of his brother, who has autism and turned 23 on Tuesday, his family said.

Gonzalez’s mother, who lost another son two years ago, turned 45 on the day after Mario died, his brother said.

"It was just heartbreaking having to see my mother see the last moments of her firstborn, which is something that no mother wants to endure," Jerry Gonzalez said.