ISTANBUL (AP) -  A strong earthquake struck Friday in the Aegean Sea between the Turkish coast and the Greek island of Samos, collapsing buildings in the city of Izmir in western Turkey, and officials said at least six people were killed and scores were injured.

A small tsunami struck the Seferisar district of Izmir, said Haluk Ozener, director of the Istanbul-based Kandilli Observatory and Earthquake Research Institute. At least four people were slightly injured on Samos, where a tsunami warning was issued.

Six people were killed in Izmir, Turkey's third-largest city, including one who drowned, and 202 were injured, according to Turkey’s Disaster and Emergency Management Presidency, or AFAD.

Izmir Gov. Yavuz Selim Kosger said at least 70 people had been rescued from the wreckage. He said four buildings were destroyed and more than 10 collapsed, while others also were damaged.

Search and rescue efforts were continuing in at least 12 buildings, AFAD said.

Videos on Twitter showed flooding in the Seferhisar district, and Turkish officials and broadcasters called on people to stay off the streets after reports of traffic congestion.

Turkey’s Disaster and Emergency Management Presidency said the earthquake was centered in the Aegean at a depth of 16.5 kilometers (10.3 miles) and registered at a 6.6 magnitude. 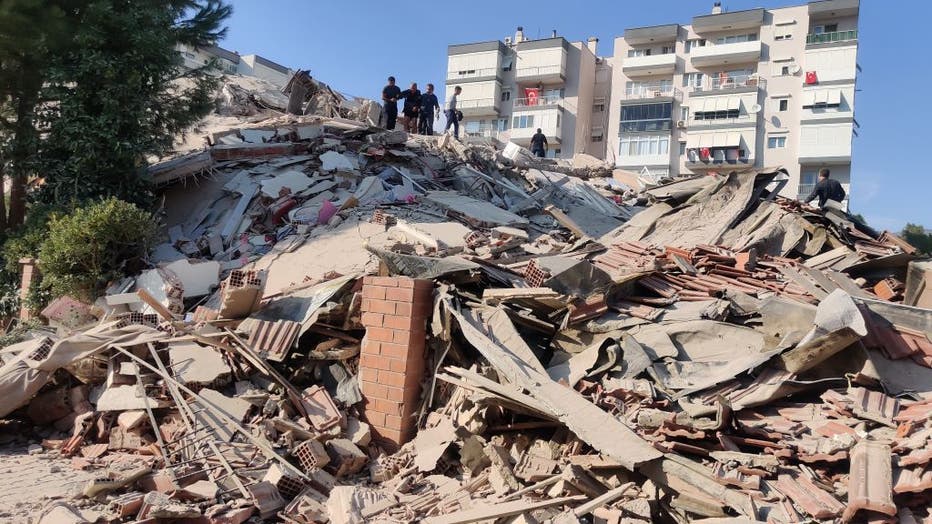 A view of a quake damaged site after a magnitude 6.6 quake shook Turkey's Aegean Sea coast, in Izmir, Turkey on October 30, 2020. (Photo by Mehmet Emin Menguarslan/Anadolu Agency via Getty Images)

The European-Mediterranean Seismological Centre said the quake had a preliminary magnitude of 6.9, with an epicenter 13 kilometers (8 miles) north northeast of the Greek island of Samos. The U.S. Geological Survey put the magnitude at 7.0. It is common for preliminary magnitudes to differ in the early hours and days after a quake.

The environment and urban planning minister, Murat Kurum, said people were trapped under the wreckage and rescue efforts were underway.

Greek seismologist Akis Tselentis told Greek state broadcaster ERT that the quake was believed to be the main earthquake, but that due to the shallow depth of its epicenter — roughly 10 kilometers — potentially powerful aftershocks could be expected for several weeks, or even a month, to come.

He said residents of affected areas must be careful not to enter buildings that might have been damaged in the initial quake, as they could collapse in a strong aftershock. 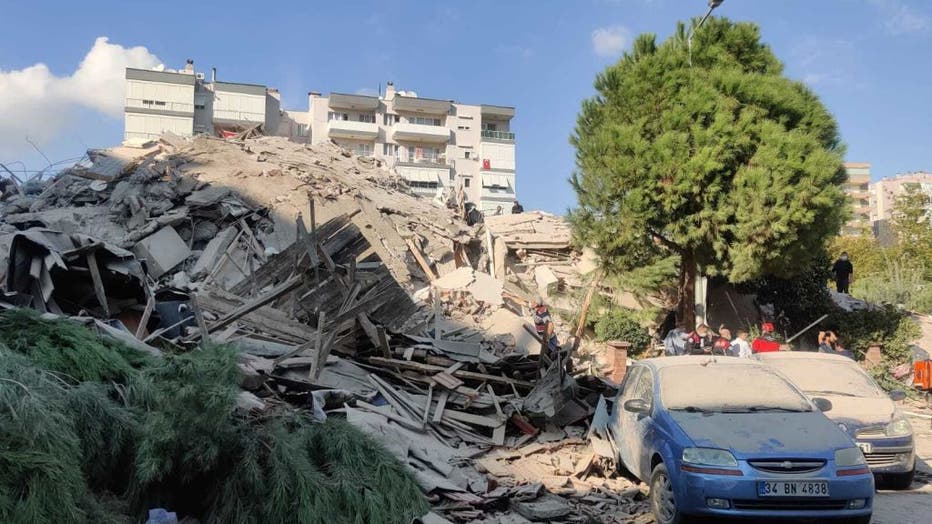 The earthquake was felt across the eastern Greek islands and as far as the Greek capital, Athens, and in Bulgaria. In Turkey, it was also felt across the regions of Aegean and Marmara, including Istanbul. Istanbul’s governor said there were no reports of damage in the city, Turkey's largest.

On the Greek island of Samos, damage was reported in buildings and the road network, while a tsunami warning was issued, with residents told to stay away from the coast. Water rose above the dock in the main harbor of Samos and flooded the street.

Residents have also been told to stay away from buildings, as aftershocks continued to rattle the area.

The Greek minister responsible for civil protection and crisis management, Nikos Hardalias, was heading to Samos, as were a search and rescue team, paramedics, and engineers.