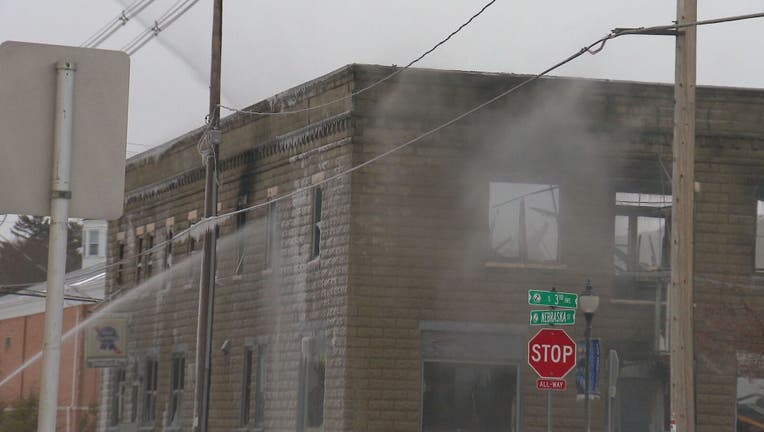 STURGEON BAY, Wis. - A tenant who lived above a Sturgeon Bay bar where a fire this week killed two people and endangered others has been arrested, according to police.

The 57-year-old man was taken into custody on probable charges of second-degree reckless homicide and second-degree endangering safety, according to Sturgeon Bay police.

A fire early Tuesday collapsed the roof and second floor and left only the walls standing. All nine mainland fire departments on the Door County Peninsula responded and fought the fire in frigid conditions.

Authorities have said nine rooms above Butch's Bar were rented. The bodies of two tenants were found in the rubble of the burned building and have been taken to Madison for identification. A third individual was injured in the fire early Tuesday and was taken to a Milwaukee burn center.

Police says the arrest Thursday followed multiple interviews as the fire's cause was investigated.

The man was taken to the Door County Jail and could appear in court Friday.

Hunger Task Force announced Feb. 24 that it has fully moved its food bank and operations to a new West Milwaukee headquarters.

Ahead of Thursday night's snow, FOX6 News stopped by Douglas Hardware in Racine. The owner said after the storm is when he expects to get busiest, so they made sure to be stocked up on salt and ready for lots of customers on Friday.