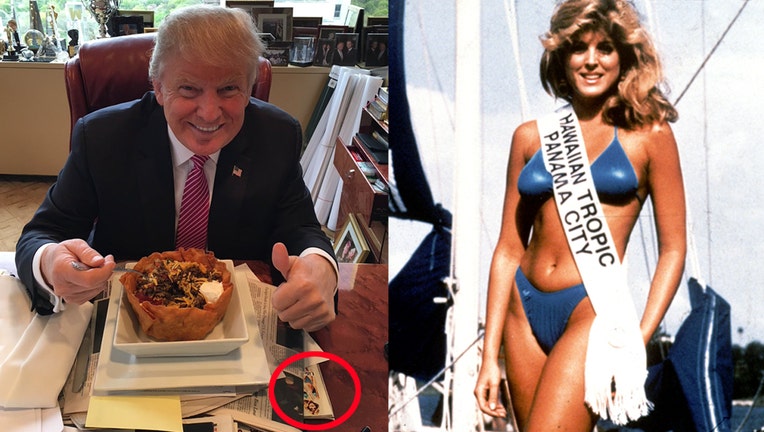 A curious photo peeked out from under a pile of newspapers in Donald Trump's Cinco de Mayo tweet – an image from 1985 showing his former wife, Marla Maples, in a bikini. (Twitter/Getty)

The furor over Donald Trump declaring Thursday that he "loves Hispanics" while feasting on a taco bowl wasn't enough to obscure a curious detail in his Twitter photo – a scantily-clad image of his ex-wife Marla Maples.

The photo, taken in 1985, shows Maples posing in Florida in a blue bikini after winning the Miss Hawaiian Tropic pageant.

Trump posted the photo with the caption, "The best taco bowls are made in Trump Tower Grill. I love Hispanics!"

Trump was married to Maples from 1993 to 1996; the two had one child together. Their marriage followed a scandalous affair that led to Trump's divorce with his first wife, Ivana Trump.

The presumptive GOP nominee is now married to Melania Trump, whom he wed in 2005.