MILWAUKEE (WITI) -- Jonathan Safran, the attorney for the family of Dontre Hamilton, said Tuesday, September 9th Hamilton's family was expected to be informed by the Milwaukee County District Attorney's Office of a charging decision in Hamilton's death. 31-year-old Dontre Hamilton was shot and killed by a Milwaukee police officer inside Red Arrow Park in downtown Milwaukee in April. The District Attorney's Office said late Tuesday afternoon no decision has been made in the case, and now, Safran says there must have been some sort of miscommunication or misunderstanding.

Safran says he doesn't believe the misunderstanding was intentional, but he told FOX6 News Tuesday it is disappointing, given that Dontre Hamilton's father took off work and drove in to Milwaukee from Indiana -- believing the District Attorney's Office would be releasing its charging decision Tuesday evening.

We've now learned it could be another month before a decision is made.

The District Attorney's Office said that meeting was meant to update Hamilton's family on the case. The office says no charging decision has been made in the case.

"It is hard to put into words the turmoil and emotion this family is going through right now. They try to live day-by-day, but they are having a very tough time getting through each day," Safran said.

Hamilton's family had no comment after Tuesday evening's meeting with the District Attorney, but Safran says they left that meeting disappointed.

"We had a short meeting with the District Attorney today. He has advised that at this point, he is not ready to make a decision. He`s indicated that he needs to have an outside independent investigation done as far as the use of force by this officer," Safran said.

Safran says it will take up to a month for the outside agency to complete that investigation.

"We have asked him and pleaded with him to try to do anything he can to make this process go much faster," Safran said.

"He wants to make sure that he has an expert that he can rely, that in a case a trial can he be sure will give good testimony. I appreciate that. I understand that. We thought that had been done already," Safran said.

"The family feels pretty strongly that there should be criminal charges -- but they also understand what the statistics are and probably would not be shocked if there were indeed no charges, although they would certainly be very disappointed," Safran said.

Safran said this in a statement to FOX6 News early Tuesday afternoon:

"By way of background, on April 30, 2014, Dontre Hamilton was lawfully in Red Arrow Park in downtown Milwaukee -- sleeping and not bothering anyone. Two Milwaukee police officers responded to complaints regarding Dontre sleeping. They determined that Dontre was not doing anything wrong, left him alone, and left the park. The officers returned a second time due to another complaint, and again -- upon confirming that Dontre was not bothering anyone or doing anything wrong -- they did not disturb him and they left the park. A third Milwaukee police officer later came to the park, and although there were again no allegations that Dontre was doing anything wrong or bothering anyone, this officer decided to wake Dontre, and perform a pat-down search, with no legal justification. This caused a confrontation, allegedly a struggle, and culminated in the police officer shooting Dontre fourteen times, while emptying the clip of bullets from his service weapon. Dontre Hamilton was killed. He was not homeless, not without family, and he was not a suspect of any crime. He did not have a lengthy criminal record, he was not a violent person, and although being diagnosed and treated for a mental illness, he did not have a lengthy mental health history.

While not being provided with any medical records or reports, the Hamilton family and attorneys previously did have an opportunity to view photographs of the officer’s upper body. We were unable to observe any evidence of injuries -- no redness, no bruising, no abrasions, and no lacerations to the officer’s head, face, neck, shoulders, back or chest. The only visible injury was a small abrasion to one of the officer’s fingers. The Milwaukee Police Department has disclosed that the officer who killed Dontre was not trained in Critical Incident (CIT) Training.

Although this agency deals consistently with citizens suffering from mental health issues, only approximately twenty-percent of their police officers have received such training. The recent passage of the Review of Deaths Involving Officers legislation requires an independent investigation by an outside law enforcement agency. However, the Milwaukee Police Department was involved in conducting the investigation of this incident. The Milwaukee Police Department may have eventually turned the investigation over to, or may have undertaken it with, the Division of Criminal Investigation (DCI) of the State of Wisconsin Department of Justice. We have not yet had an opportunity to review any of the investigative materials, reports, or witness statements. The investigative materials and final report from DCI were finally provided to District Attorney Chisholm for his review on August 8, 2014, more than three months after this incident occurred."

"The District Attorney has made no decision in this matter.  The sole purpose of the meeting tonight with the family of Dontre Hamilton is to update them on the progress of the investigation."

It is unclear which outside agency will conduct this second independent investigation into the shooting of Dontre Hamilton.

The announcement that Hamilton's family would be meeting with the District Attorney's Office Tuesday evening came on the same day a group planned to hold a press conference at Milwaukee's City Hall to begin at 5:00 p.m.

Demonstrators have been marching through Milwaukee in support of the Hamilton family, and on Tuesday evening inside Milwaukee's City Hall, they stood in support of one of their own. 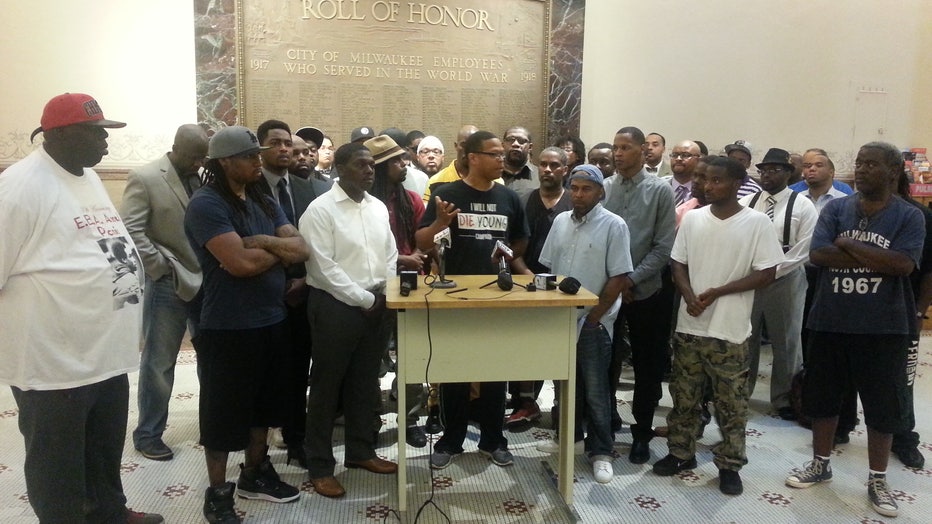 The group hosting the news conference says it was in response to their being shut out of last Thursday's Fire and Police Commission meeting.

The group had planned to present a list of demands to the Fire and Police Commission during its Thursday meeting -- relating to the Dontre Hamilton case, but the group arrived at City Hall about 45 minutes into the meeting, and they weren't allowed inside. City leaders say that's because the room was full, and the group was late.

The group says it is upset over comments made by Milwaukee Police Chief Ed Flynn following Thursday's demonstration -- regarding demonstrator Khalil Coleman.

"How dare you single out our brother and speak to his character as if you had the moral authority to do so. Chief Flynn recently and unfairly labeled Khalil Coleman as an opportunist, but we vehemently disagree with his assessment," a demonstrator said during the press conference Tuesday.

The group has issued this statement regarding its planned demonstration for Tuesday evening:

"In the wake of recent protests of the Milwaukee Police Department’s refusal to allow the public to enter an open Fire & Police Commission hearing at City Hall, Chief Flynn used the opportunity to publicly defame the service and leadership of Mr. Khalil Coleman.

Mr. Coleman was one of over 50 protesters seeking to enter the Fire and Police Commission last week.

During a press interview after the protests, Chief Flynn chose to ignore the merits of the protest and dismiss Mr. Coleman as an “opportunist”. This remark was grossly inaccurate, unprofessional, and further demonstrates his complete disregard for the concerns of citizens who are committed to making Milwaukee neighborhoods safe.

Unfortunately, this work becomes difficult when sworn officers are involved in persistent and disgusting violations of human rights through illegal body searches, failing to render aide, and outright shooting of unarmed citizens with impunity.

The remarks by Chief Flynn reveal a troubling attitude that he can outright ignore and disrespect the presence of concerned citizens and grieving families who have been wronged by the very officials appointed to serve and protect them.

This disrespect will no longer be tolerated. We stand united with the Hamilton family, Khalil Coleman and the dozens of other concerned citizens who exercise their right to hold public servants accountable. We are committed to ensuring that the focus remain on seeking accountability for the actions by an MPD officer that led to the death of Mr. Dontre’ Hamilton at Red Arrow Park. We will remain united until decisive action is taken to ensure that these reprehensible acts cease in our city.

As the appointing authority for the Chief and the Fire and Police Commission, we expect for Mayor Tom Barrett to step up and demand accountability for ensuring that the Milwaukee Police Department has the necessary leadership and accountability to conduct itself in a manner of professionalism and integrity that the people of this city deserve.

We will stand together to address these concerns and call on city leaders to return law and order to this city starting from within. You cannot achieve peace on the streets when violence, abuse, and murder is tolerated within City Hall."

Dontre Hamilton's brother, Nathaniel was present for the press conference. He says his family stands with Khalil Coleman.

Milwaukee Police Chief Ed Flynn wouldn't go on camera Tuesday, but an MPD spokesman issued this statement: "The statements made by Chief Flynn last week spoke for themselves. There's nothing more to add."

This group of demonstrators has demanded, along with the Hamilton family, that the name of the Milwaukee police officer who shot and killed Dontre Hamilton be made public. Chief Flynn has said that's something that won't happen until the District Attorney's Office makes a charging decision.

"Obviously, the officer`s name will be released when the District Attorney releases his charging decision. That`s true for everyone involved in a shooting -- civilian or law enforcement personnel," Chief Flynn said.

Following the press conference at City Hall, the group dispersed. FOX6 News is told no demonstrations are planned for Tuesday night.

Nathaniel Hamilton then made his way over to the District Attorney's Office, where his family met with the DA in the shooting case involving his brother.

CLICK HERE for complete coverage of the Dontre Hamilton case via FOX6Now.com.