After a rally outside the police department, organizers led a march to FBI Headquarters. As they marched back toward the Brooklyn Center Police Department, the crowd swelled. The crowd remained peaceful before dark Tuesday evening, with the majority of the crowd listening to the speakers. The event "devolved," according to State Patrol Col. Matt Langer, as the evening went on.

At one point, protesters began shaking the fence surrounding the police station. Law enforcement told protesters over a loudspeaker that the assembly was unlawful and gave them 10 minutes to leave the area. Video showed police making arrests outside the police department just before 9 p.m.

Protesters were seen lighting a fire in a strip mall parking lot Tuesday night after hours of demonstrations in the area.

Law enforcement officials displayed items thrown at officers on the third night of unrest at the Brooklyn Center Police Department.

Early Tuesday morning, law enforcement officials held a news conference where they displayed some of the items that were thrown at officers during the confrontation, which included bricks, a traffic sign and bottles of water and milk.

Law enforcement deploy a flash bang after protesters shake fence surrounding the Brooklyn Center Police Department. The rally is held in response to the deadly police shooting of Daunte Wright.

After the rally and the protests were diminished by law enforcement, a fire broke out at 70th and Humboldt near the scene of the demonstrations after 11 p.m. Tuesday night.

Fire engulfs dumpsters near 70th and Humboldt in Brooklyn Center

Near the site of hours long protests in Brooklyn Center Tuesday night, a fire engulfed some dumpsters and a vehicle outside an apartment building.

The Minnesota National Guard upped their presence Tuesday inside the temporary barricades placed around the police headquarters ahead of the protests. According to a city spokeswoman, a curfew is in effect in Brooklyn Center from 10 p.m. Tuesday to 6 a.m. Wednesday.

For the third straight night, protesters descended on the Brooklyn Center Police Department to protest the police shooting death of Daunte Wright. Law enforcement says its officers were targeted with projectiles throughout the night. Tear gas and flash bangs were used against protesters, too.

In nearby Minneapolis, where looting was reported Sunday and Monday night, there were no reports of looting or business break-ins Tuesday night, according to Deputy Chief Ameila Huffman. Only two people were cited for curfew violations. 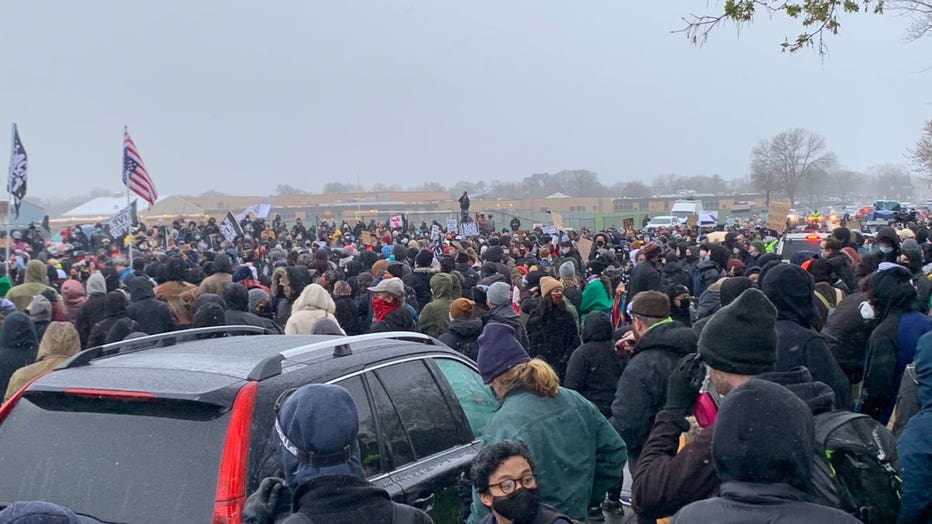 A peaceful and growing crowd listens to speakers at a rally outside the Brooklyn Center Police Department Tuesday night.

Monday night, 34 people were arrested during protests that continued past the city’s 7 p.m. curfew. During those protests, protesters tried and failed to breach the temporary fencing erected around the police department.

Police used pepper spray on protesters during a demonstration near the Brooklyn Center Police Department after curfew Monday night.

Protesters were also seen shooting fireworks and throwing objects at police. Officers were seen using tear gas and flash bangs against protesters, too.

Some looting was reported Monday, including a Dollar Tree near the police headquarters. Other businesses in Minneapolis were also broken into and looted Monday night.

Law enforcement officials say 40 people were arrested overnight following unrest over the deadly police shooting of Daunte Wright, a 20-year-old Black man, during a traffic stop. Hundreds of protesters gathered outside the Brooklyn Center Police Department Monday night, with things getting tense between police and protesters after the metro-wide curfew went into effect.

Protests across the U.S.

Daunte Wright's death sparked protests Monday night across many U.S. cities — including Portland where a demonstration turned into a riot. Some in the crowd threw rocks and other projectiles at officers.

In addition to Portland, demonstrations took place in Washington, D.C., New York City and Los Angeles, among others.