MILWAUKEE -- Milwaukee County Executive Chris Abele, Milwaukee Bucks President Peter Feigin and leaders from the construction and trade industry in Milwaukee were present on Wednesday, September 9th when a land sale was announced related to the Bucks downtown arena. Land in the city's Park East Corridor has been sold to the Bucks for $1.

As part of the sale, land bordered by McKinley Avenue on the North, Old World Third Street on the East, Juneau Avenue on the South, and Winnebago Street on the West, will be sold to Head of the Herd LLC, a development group associated with the Milwaukee Bucks. 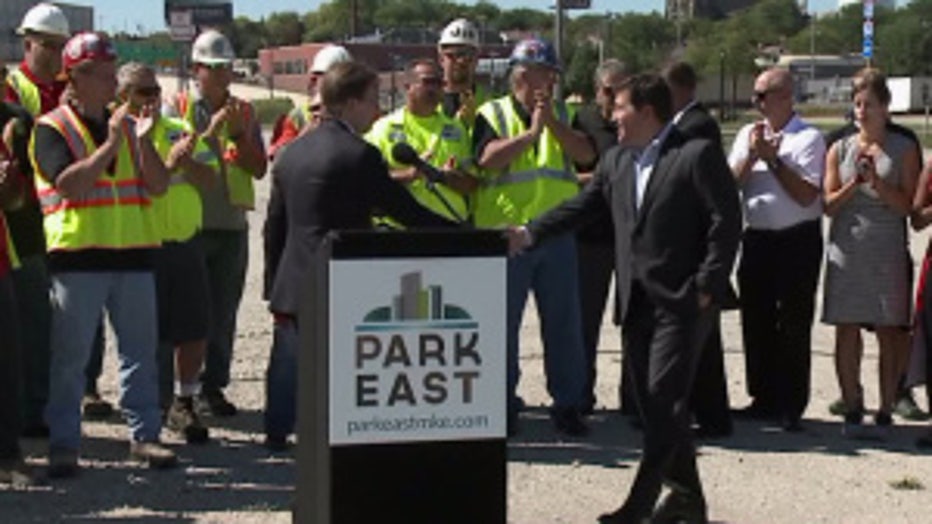 The land sale is part of the Milwaukee Bucks $500 million arena project in downtown Milwaukee.

On Wednesday, Milwaukee County Executive Chris Abele said about the deal being signed, "We have never had a win like this, ever." He went on to say, "We're here because we're creating jobs, thousands of jobs. We're gonna create 3,600 jobs, starting now. This isn't, today, about the Bucks -- though I'm a big fan. This is about jobs. This is about Milwaukee, and this is about economic development."

Abele touted the arena project and said all parties involved would be involved in helping "lift this city up." He also thanked Gov. Scott Walker, the state Legislature, county and city leaders for their role in making this happen.

Feigin called the signing of the deal a "very special moment for the Bucks" -- and said he's thrilled to be part of it. Feigin said, "We're pumped to get this project started."

Dan Bukiewicz, president of the Milwaukee Building & Construction Trades Council, also spoke at Wednesday's news conference. Bukiewicz said of the future development, "You only need to see 833 and Northwest Mutual rising out of the ground. Those are union projects built by tradesmen and women such as this. Our signature landmarks are all over the city. From the Bradley Center, beyond the equipment, to Miller Park, to the US Bank building, to the former County Stadium, to the power plants that provide you with power. When you're going to build something, you build it with a championship team." 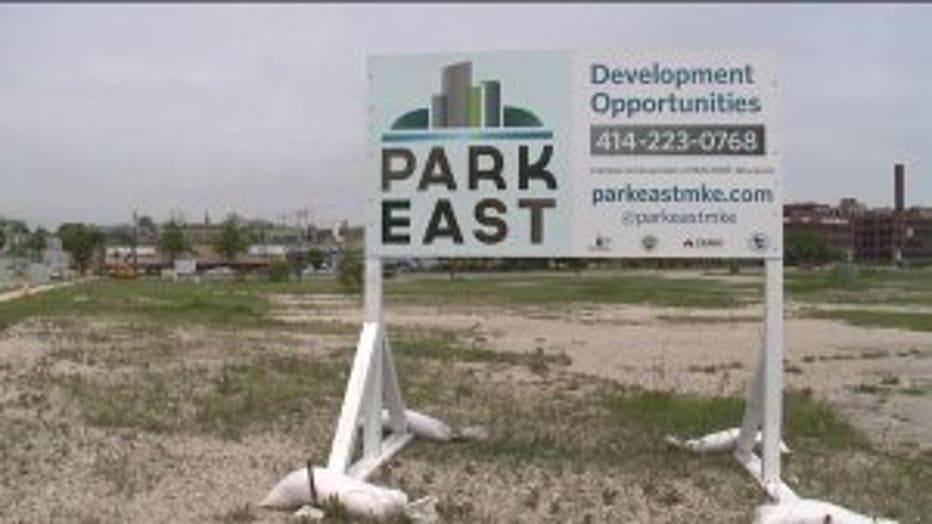 Some have been critical of the plan to sell the land for just $1 -- saying it's too valuable to sell at that price.

"This is a huge giveaway to some extremely wealthy people -- ultimately, at the taxpayers' expense," Milwaukee County Supervisor John Weishan said.

Weishan says the land is valued at $8.9 million. He says even with County officials estimating several million will be needed to prepare the land for use, Weishan believes Milwaukee County can do better.

"The Milwaukee Bucks have been willing to pay above market value for property in the area on the private side. I`d like to know why we have to then undercut our property so substantially," Weishan said. 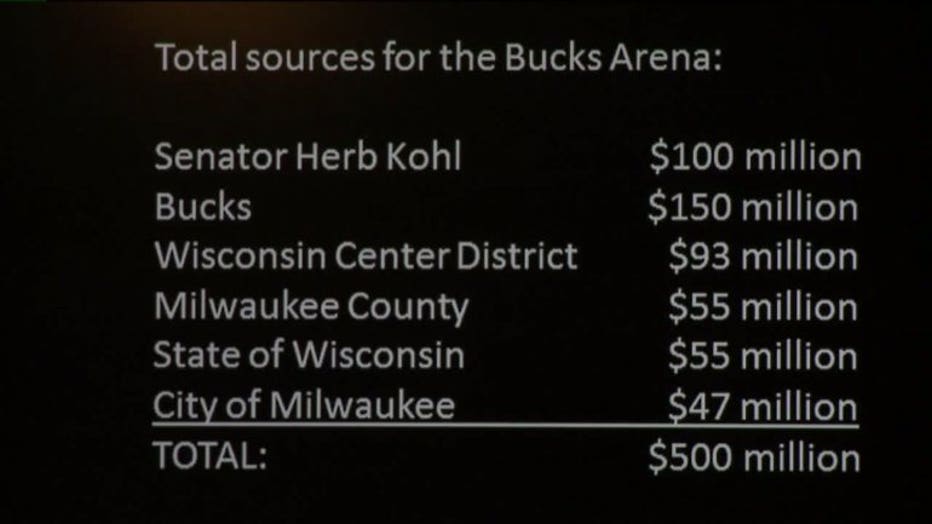 Under the agreement, current and former Bucks owners will pay $250 million toward the $500 million cost of the arena. While the taxpayers’ sticker prices is $250 million, the actual cost is closer to $400 million when you factor in interest: $80 million each from the state and Milwaukee County, $47 million from the city and $200 million from the Wisconsin Center District.

The $500 million arena and $500 million sports and entertainment complex surrounding it will be located in downtown Milwaukee. 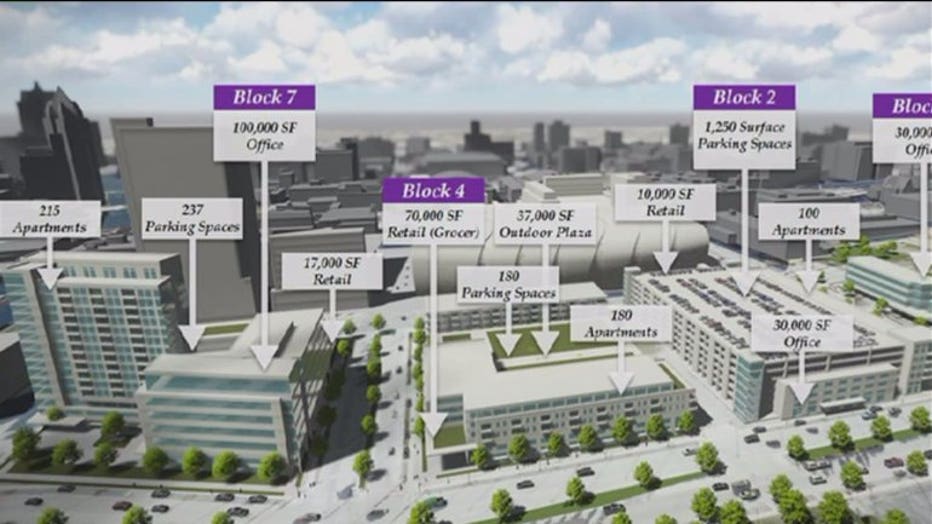 Legislative files regarding the city’s proposed contribution to the arena project will be heard at the regular September meetings of the Finance and Personnel Committee and the Zoning, Neighborhoods and Development Committee.

Mayor Barrett hopes the full Common Council gets a chance to consider the matter on September 22nd.

The Bucks hope to break ground on the $500 million arena this October.

“We’re grateful for the leadership of County Executive Chris Abele and his team to seize this opportunity to revitalize the heart of downtown Milwaukee. As we forged this partnership, county and city officials have been incredibly dedicated to ensuring this development will benefit the entire community.

“The Park East land is a vital piece to our owners’ vision that goes beyond a new arena by attracting hundreds of millions more in private investment to our community. This sale represents the next step in a major economic development that will change the landscape of Milwaukee County. On this ground, we envision a vibrant community space featuring housing, office, commercial and retail opportunities, that will link the neighboring communities together with a world-class sports and entertainment destination.

“Starting with our practice facility, we can’t wait to begin work and start creating jobs, attracting further investment and becoming a great partner in the revitalization of Milwaukee.”

Milwaukee County Board Chairman Theo Lipscomb issued the following statement on the sale of the land:

"Today we all celebrate that the Bucks are staying in Milwaukee, but tomorrow and for the next 20 years taxpayers must pay the tab Chris Abele ran up. The Bucks recently paid above market value in private transactions, but when it comes to land owned by taxpayers, Chris Abele chose not to hold them to the same standard."

Milwaukee County Supervisor Michael Mayo, Sr. said the sale was “not a good deal given the needs the County has in paying off its debts:"

“The deal is done, but the point is not moot. We still have $3.5 million in debt service for bonding for the annex parking lot. We still have a lot of infrastructure that needs repair, especially in our parks. Is this really the best deal the County Executive could have negotiated? Where did he get his negotiating skills? He should have been thinking about the County’s needs, not the Bucks’ needs.

There have been a lot of promises made with regards to what this land sale will mean for downtown Milwaukee and the residents of Milwaukee County. I hope those promises come to fruition, but I am a bit skeptical.

I’m looking for the best deal for taxpayers, and I’m not sure selling this valuable piece of land for $1 is in their best interests.”

Milwaukee County Supervisor Steve Taylor today said that the process for selling the Park East to the Milwaukee Bucks for $1 lacked transparency, but he said he was happy it would lead the Bucks to stay in Milwaukee:

As chairman of the Economic and Community Development Committee, naturally I want to see economic enhancements to the County. But we won’t know for almost a decade whether this particular sale was the right thing to do. I’m happy the Bucks will stay, but I want the best deal for taxpayers and I don’t know whether this is it. A public vetting of the proposal would have helped the public to know whether this was a good deal.

I hope the County Executive will be more open to public comment the next time he decides to sell county land."