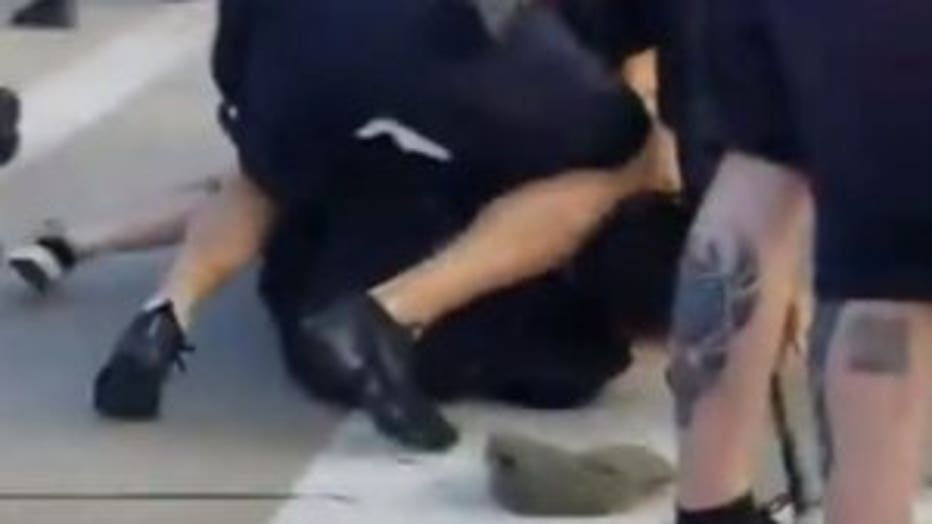 MILWAUKEE -- A controversial arrest is sparking outrage from some city leaders after an officer is seen restraining a protester with his knee on the man's head and striking him in his side during a march at 6th and McKinley on Tuesday.

"I have questioned both police and fire for the way that they have acted over the past several days," Alderwoman Milele Coggs said.

They are also asking that officer be removed from crowd control duty during the unrest.

"Such behavior can cost somebody their life," Ald. Coggs said.

"The tactic is on the upper shoulder," Milwaukee Police Chief Alfonso Morales said. He is standing behind the officer's actions.

"Our teams that are out there for these civil disturbances, for these riots. They're trained to make arrests. That was an arrest that was within policy," Chief Morales said.

Police released a statement saying the protester was part of a group that attempted to surround a police vehicle.

As they tried to arrest him, they say the man, his bike and an officer fell to the ground and struggle ensued.

Police say the officer attempted to restrain him by putting his knee on the man's shoulder, but he was moving.

The incident is under review.

The arrest now in the spotlight as protests continue throughout city.

Below is the full statement from the Common Council members:

"Today we are calling for a formal investigation by the Fire and Police Commission into the video of an incident that occurred on June 2 showing a police officer restraining a protester using a knee to the neck and head. This incident occurred at N. 6th and W. Vliet Streets during a large gathering of protesters and a large response by police.

"The video of the incident has been shared on social media and shown by news outlets, and we find the officer’s conduct unacceptable. The knee restraint hold helped to cause the death of George Floyd in Minneapolis when a police officer forcefully pushed on his neck for nearly 10 minutes on May 25th, and it seems more than obvious that the hold should not be used by law enforcement under any circumstances.

"We also ask that the officer involved in the incident be removed from crowd control duty for the remainder of the protests and unrest.

"We urge any protesters who have experienced mistreatment, abuse or injury at the hands of Milwaukee Police to please contact the Fire and Police Commission and look into filing a complaint. Inquiries can be made by going to the FPC website at city.milwaukee.gov/fpc/complaints or via email at fpc@milwaukee.gov.

"Tomorrow (Friday, June 5) there will be a special meeting of the Public Safety and Health Committee at 2:30 p.m. about the city’s response to the unrest. This is a virtual meeting, and those wishing to view the proceedings are able to do so via the City Channel - Channel 25 on Spectrum Cable - or on the Internet at http://city.milwaukee.gov/citychannel.

"The file to be taken up is Council file #200214 - Communication from the Office of the Mayor, the Milwaukee Police Department, and the Fire and Police Commission relating to circumstances under which a curfew is declared, the policies used to enforce it, and the operational definition of the phrase “civil unrest” and the manner in which it is enforced. Sponsors: Ald. Rainey, Ald. Lewis, Ald. Coggs, Ald. Stamper, Ald. Hamilton and Ald. Dodd.

"We are all in this together, and as elected leaders we remain committed to pushing for reforms that will keep our city safe for everyone and our departments accountable to city residents."

Video shows a man lying on the ground as an officer restrains him.

"Stop that! Stop that!" the crowd shouted as the officer's knee held the man down, and kicked him in his side. 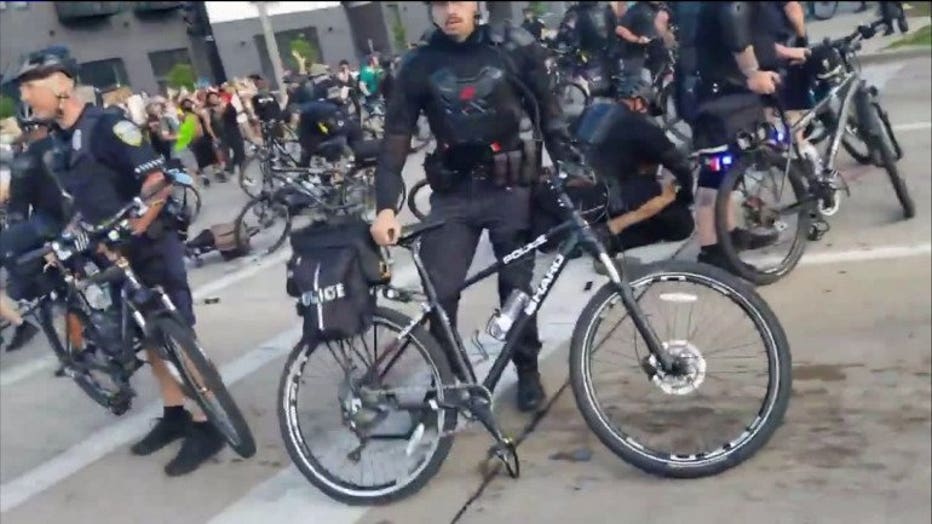 In the end, the protester stood up in handcuffs, as the clash between the two groups continued.

“I support the rights of protesters to voice their concerns.  I also want and expect peace in our community. I’ve seen the reports of interactions between law enforcement and protesters and I want these to be reviewed immediately. It’s important to promptly examine the body camera footage and see what precipitated these actions.  The videos raise questions and we must have all the information. My focus will continue to be on creating an environment where peaceful protesters can express their rights safely and maintain order and safety for all our residents including our first responders.”

"The Milwaukee Police Department is aware of a video that has been circulating on social media.  The video captured the arrest of a subject that occurred on Tuesday, June 2, 2020, at approximately 7:20 p.m., on the 600 block of West McKinley Avenue.

MPD officers were at the location to monitor what was a peaceful protest. While on scene, several protestors attempted to surround and block squad cars that were monitoring the demonstration.

As an officer attempted to take the main suspect into custody, the suspect pulled away, causing the officer, the suspect and the suspect’s bicycle to fall to the ground. A brief struggle ensued and a secondary officer assisted in the arrest.

During the course of this incident, force was used to gain compliance.

The encounter on the ground lasted approximately two minutes and after the suspect was handcuffed he was immediately brought to his feet. The suspect was later identified as a 28 year old Milwaukee man, who was cited for disorderly conduct and later released.

The force utilized by the members in this incident is under review."