BOSTON - U.S. colleges hoping for a return to normalcy next fall are weighing how far they should go in urging students to get the COVID-19 vaccine, including whether they should — or legally can — require it. 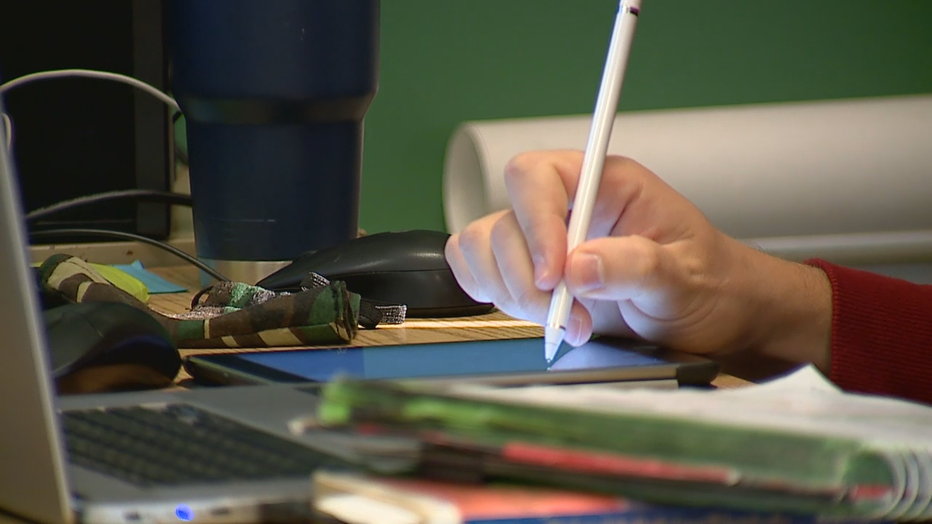 Universities including Rutgers, Brown, Cornell and Northeastern recently told students they must get vaccinated before returning to campus next fall. They hope to achieve herd immunity on campus, which they say would allow them to loosen spacing restrictions in classrooms and dorms.

But some colleges are leaving the decision to students, and others believe they can't legally require vaccinations. At Virginia Tech, officials determined that they can’t because the U.S. Food and Drug Administration has only allowed the emergency use of the vaccines and hasn't given them its full approval.

The question looms large as more colleges plan to shift back from remote to in-person instruction. Many schools have launched vaccination blitzes to get students immunized before they leave for the summer. At some schools, the added requirement is meant to encourage holdouts and to build confidence that students and faculty will be safe on campus.

"It takes away any ambiguity about whether individuals should be vaccinated," said Kenneth Henderson, the chancellor of Northeastern University in Boston. "It also provides a level of confidence for the entire community that we are taking all appropriate measures."

Northeastern and other colleges requiring shots believe they’re on solid legal ground. It’s not unusual for colleges to require students to be vaccinated for other types of diseases, and a California court last year upheld a flu shot requirement at the University of California system.

But legal scholars say the COVID-19 vaccines' emergency use status moves the issue to a legal gray area that's likely to be challenged in court, and some colleges may take a more cautious approach to avoid litigation.

Harvard Law professor Glenn Cohen, who teaches health law and bioethics, said there's no legal reason colleges wouldn't be allowed to require COVID-19 vaccinations. It makes no difference that the shots haven't been given full approval, he said, noting that many colleges already require students to take coronavirus tests that are approved under the same FDA emergency authorization. But there’s also no federal guidance explicitly permitting vaccination mandates.

The biggest clashes could come in states taking a stance against vaccination requirements, he said.

In Florida, Gov. Ron DeSantis this month banned all businesses from requiring customers to show proof of vaccination. The order raises questions about Nova Southeastern University's plan to require students and staff to get vaccinated. The college’s president said he’s still confident in the plan, but he also promised to "respect the laws of our state and all federal directives."

The governor of Texas, the country's second-largest state, issued a similar order.

There’s a parallel debate about whether to require vaccination for faculty and staff, an issue that employers across the nation are grappling with. At the University of Notre Dame, one of the latest schools to require student vaccinations, shots are still optional for workers. Northeastern is considering whether to extend its mandate to employees.

Even at schools making shots mandatory, there are exemptions. Federal law requires colleges to provide accommodations to students who refuse a vaccine for medical reasons, and most schools are also offering exemptions for religious reasons.

At Brown, students who forgo shots and have no valid exemption must file a petition to study remotely or take a leave of absence next fall, the school’s president, Christina Paxson, told students in a letter last week.

But enforcing vaccine mandates will bring its own challenges. Cornell and Northeastern say students will be asked to show proof of vaccination, but there is no widely accepted vaccine credential. Cornell told students they can provide the card given out at their vaccination site, but card formats vary and generally seem like they would be easy to forge.

At Northeastern, officials are still deciding whether students will have to provide a medical record proving they were vaccinated or whether they will be allowed to attest to having been immunized — essentially taking their word for it.

"We would expect students to be honest and forthright about any attestation they make to the university," Henderson said.

Northeastern student Tyler Lee said he thinks requiring vaccinations is the right move because it will help stop the virus’ spread and protect the community around the downtown Boston campus. There has been some pushback from parents, but little from students, he said.

"It’s Northeastern’s decision," said Lee, a senior who is awaiting his second shot. "If I didn’t like it, I would transfer. And that’s what most students feel."

Ariana Palomo, an incoming freshman at Brown, said the university’s mandate sends the message that it’s serious about keeping students safe. She was "happy and relieved" when she heard about it, she said.

"I know that I’m going to feel so much safer on campus," said Palomo, 18. "This is the next step in protecting one another and preventing more lives from being lost."

Schools expect some pushback, and Republican student groups on some campuses have opposed mandates, saying it should be a choice.

Colleges are also grappling with what to expect of international students, who may not have access to vaccines in their home countries or who may get shots that are not used in the United States. Some colleges say they’re planning to develop arrangements to make shots available for international students when they arrive.

Other colleges are using a lighter touch to promote shots, including at Dickinson State University in North Dakota, which is exempting students from a campus mask mandate two weeks after they are fully vaccinated.

Many others are hoping a word of encouragement will be enough. Campus officials at Bowdoin College in Maine said it’s their "hope and expectation" that all students will get shots. Harvard University officials "strongly recommend" that students get vaccinated but have stopped short of a mandate.

Some, including Dartmouth College, are waiting for shots to become more widely available before making a decision. Diana Lawrence, a spokesperson for Dartmouth, said officials "cannot make a determination regarding required vaccination until vaccines are accessible for all students."

Give blood with the Red Cross during National Volunteer Month

The Red Cross continues to urge healthy individuals, especially those with type O blood, to give blood to ensure hospitals can meet patient needs.

Tailgating is back at the American Family Field -- just in time for the Brewers to take on the Cubs.