MILWAUKEE (WITI) -- The Coast Guard rescued three mariners after their boat capsized off the South Shore Marina near Milwaukee, Wednesday.

Search and rescue coordinators at Coast Guard Sector Lake Michigan received a call at 8:25 a.m. about three men who were in the water after their 14-foot boat capsized close to Texas Rock.

Sector personnel instructed crews from Coast Guard Station Milwaukee to launch, aboard a 45-foot response boat. Once on scene, it was determined that the response crew could not get close enough the men, who were able to swim to safety and onto the rocks of a nearby breakwall.

Because of the proximity to the rocks, a crew aboard a 25-foot response boat was requested, arrived on scene and was able to get close enough to transfer the individuals from the rocks by using a secondary, inflatable boat. The men had no immediate medical concerns and were transferred back to Coast Guard Station Milwaukee.

The boaters, who were all wearing life jackets, had been in the 45-degree water for approximately four  minutes.

Once the men made it to safety onto the breakwall, their only means of communication was a cell phone, which they used to send a text message to a coworker informing him that they were in distress.

“Your primary means of communication should be a waterproof, handheld, VHF radio," said Cmdr. Erik Leuenberger, chief of response at Sector Lake Michigan. "They're inexpensive and provide a means for the Coast Guard to assist in establishing your location through direction finding equipment.”

“People out on the water need to have good situational awareness all the time," said Jirik. "Things can change really quickly. Know where your safety equipment is and how to use it.” 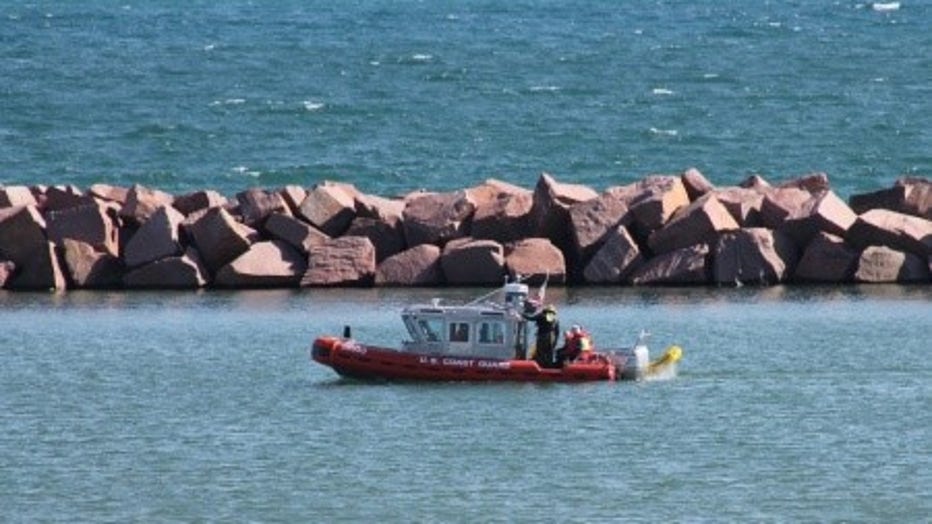