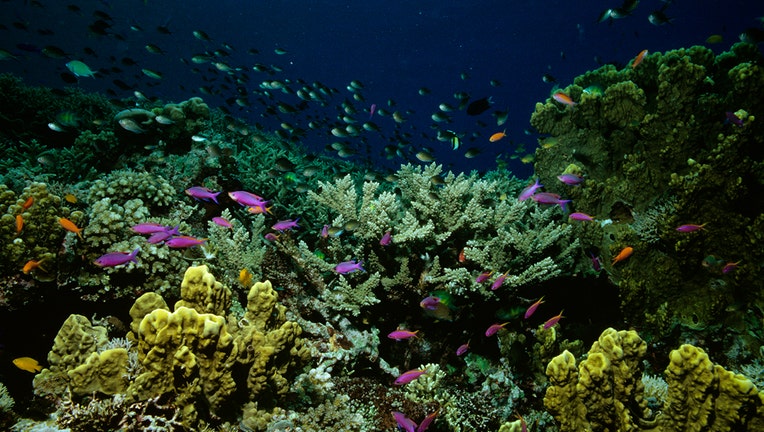 The study, titled “Long-term shifts in the colony size structure of coral populations along the Great Barrier Reef,” found that the reef ecosystem lost half of its corals between 1995 and 2017.

“As the depletion of coral populations and the erosion of the structural complexity of reef habitat continue, and the frequency of reef disturbances increases, we urgently need better data on demographic trends in corals,” the study authors wrote.

For the new study, researchers with the Australian Research Council’s Center of Excellence for Coral Reef Studies measured changes in coral colony sizes along the Great Barrier Reef’s more than 1,400-mile length between 1995 and 2017.

Biden lashed at Trump, saying the moment requires “leadership, not scapegoating” and that “it's clear we are not safe in Donald Trump's America.”

Researchers found that a number of small, medium and large corals on the reef declined more than 50% since the 1900s, and this decline occurred in both shallow and deeper water, and across virtually all species, especially among branching and table-shaped corals.

Declines were particularly pronounced in the northern and central regions of the Great Barrier Reef, following mass coral bleaching in 2016 and 2017, according to the study.

The findings demonstrate the importance of examining the abundance of colonies of different sizes.

“Cover is a valuable overall measure of reef health, but size structure offers insights into the demographic processes that underlie declines in coral cover, and which hold crucial clues about future population trajectories,” the study’s authors wrote. “Detecting demographic shifts that may indicate, for instance, recruitment failure or the depletion of broodstock will be critical to our ability to predict recovery or continued decline.”

RELATED: 68% of voters say climate change will be ‘important issue’ in their 2020 election decision

Andreas Dietzel, a coral researcher at James Cook University, said that human-caused climate change is the primary factor of the rising ocean temperatures that have killed off half the reef, the Australian Broadcast Corporation (ABC) News reported.

"We can clearly correlate the rising temperatures to coral mortality and bleaching on the Great Barrier Reef," he said.

The study notes that changes in the population structure not only affect their demographic performance but can also have cascading effects on community composition and ecosystem functioning. The study cited an example of the global decline in large, old trees stating that it “implies a loss of critical habitat, food and carbon storage.”

“Reef-building corals resemble trees in their pivotal role as primary habitat providers, and in the importance of the size of individuals for population dynamics. Consequently, changes in the size structure of coral colonies have major implications for demographic performance, and for the structural complexity of the reef environment, which in turn affects fish abundance and the productivity of coral reef fisheries,” the study authors wrote.