MILWAUKEE -- Four men from Illinois and Indiana are now charged in connection with the burglary of the Best Buy store in Greenfield on Sept. 8. Police say the suspects are part of a larger crime ring -- that has stolen $1 million worth of merchandise over the summer. 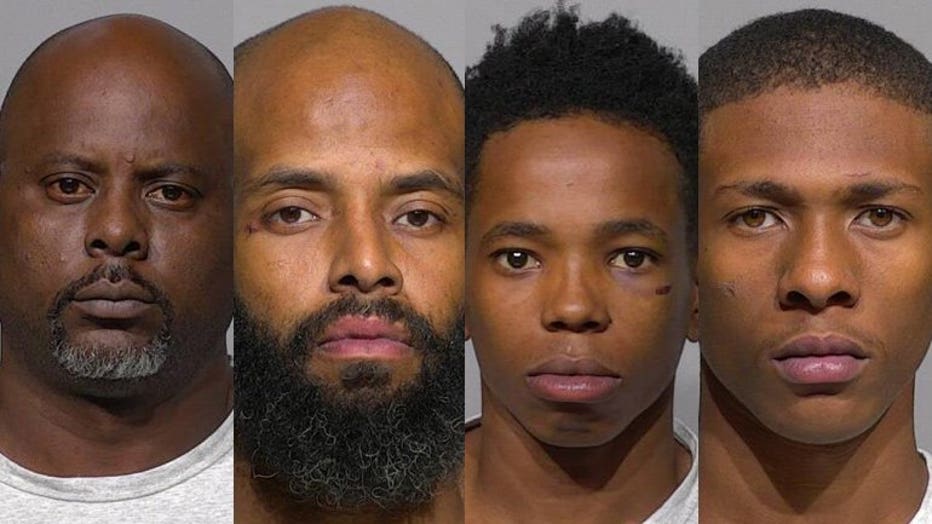 According to the criminal complaint, a Greenfield police officer responded to a burglary alarm at the Best Buy store on S. 76th Street just after 4 a.m. on Sunday, Sept. 8. As he pulled into the parking lot, the officer turned off his squad's lights and observed a white van "pulling out from behind the business." When the officer saw this, he activated his emergency lights and siren -- and a pursuit began.

The complaint indicates inside the van officers located "two City of Milwaukee garbage bins, tools, clothing, and a large amount of electronic equipment in wrapped packaging." Officers also learned the van "being driven by defendant Steppes had been previously reported as stolen and that none of the individuals in the van had consent to be in the stolen car."

"...the business was forcibly entered through a back door."

Officers followed up with the Best Buy store. The complaint says "the business was forcibly entered through a back door." Video surveillance backed that up -- and showed the suspects "running around the closed store, grabbing electronic items and placing them into a garbage bin" -- the same type of garbage bin that was recovered from the van. Officials say the value of the merchandise taken was approximately $19,000.

The "three men then brought in one garbage can and began to grab stuff."

Investigators interviewed Durkins and Harris. The complaint indicates Durkin and two other men "brought a garbage can into the store with them. Durkins stated while in the store, he and the other two men were wearing gloves." Durkins said "Steppes stayed in the van and waited for the men to exit." Harris had a similar story, according to the complaint. It says Harris indicated all the men met up at a motel. The complaint goes on to say "Harris confirmed it was Listenbee who busted the door open" at the Best Buy. The "three men then brought in one garbage can and began to grab stuff." The complaint says Harris "saw the police when they were pulling away and saw the police chase them. Harris stated Steppes was driving the van and did drive away from the police."

Online court records indicate the suspects each had their initial appearances on Friday, Sept. 13. They are due back in court for preliminary hearings on Sept. 23.

While only charged in this one incident, police say these suspects are part of a larger crime ring -- responsible for at least 25 burglaries over the past three months. They allegedly hit other stores in the area including Ulta, Kohl's and Art's Cameras Plus.