MILWAUKEE -- Milwaukee police say an arrest has been made in connection with an armed robbery and shots fired incident at the Chivas Bar near 9th and Pierce Street.

The incident happened on January 31st, and it was captured by the bar's surveillance cameras.

Police say the 22-year-old suspect was arrested on February 1st near 44th and Burleigh.

He was wanted for the armed robbery at the Chivas Bar -- and police say he's believed to be responsible for several other similar incidents across Milwaukee's south side.

The investigation is ongoing and the cases will be presented to the Milwaukee County District Attorney’s Office in the coming days.

Pablo Maicias, the bar manager at Chivas, described the terrifying moments that happened as he closed the bar on Sunday morning, January 31st. A man who ordered two Coronas wasn't going to leave peacefully at bar time.

"He took the gun. He say 'give me the money.' And I give him the money and then I go sit down on the chair," Maicias said.

A customer then pleaded with the suspect.

As Maicias sat in a chair, the suspect noticed the monitor for the surveillance cameras. He fired four times, smashing the screen.

Maicias was nearly struck in the head.

"A bullet comes one inch to my head. It came that close to my head -- one inch," Maicias said.

The video shows dust fly from the impact of the shots that were fired.

Some say the suspect's grip of the weapon and stance shows he's not an amateur when it comes to firearms. He can be seen in the video backing up like a trained security professional as he left the bar.

Maicias told FOX6 News the same man has been robbing other south side bars over the past week. 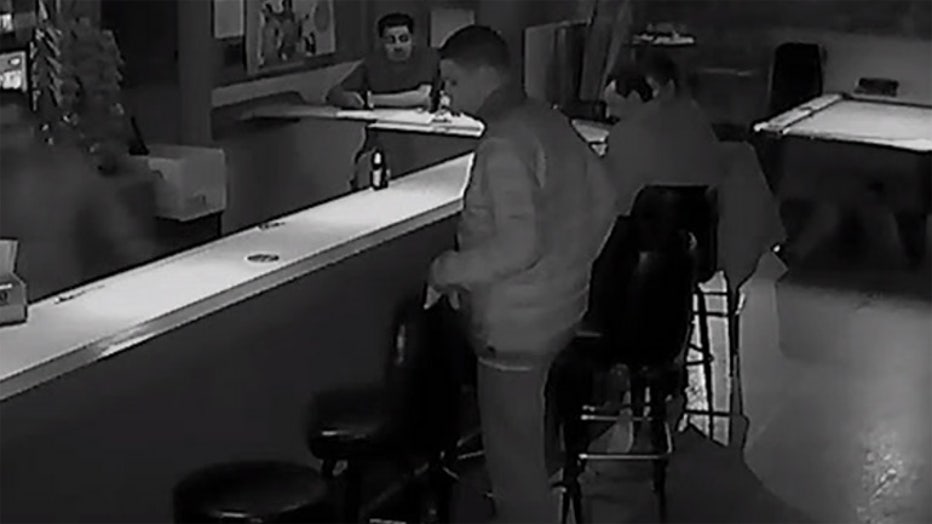