(CNN) -- A 7-year-old boy was fatally injured when a trailer being pulled by his father ran over him during an Oklahoma Fourth of July parade, an incident police described as "heartbreaking."

The young boy either fell or jumped off the float and was run over by the trailer carrying it, according to police in Edmond, which is about 15 miles north of Oklahoma City.

The boy's father was in the truck that was towing the trailer, which was filled with hay and decorated by small patriotic garland along its edges. The float had a martial-arts theme, according to police spokeswoman Jennifer Monroe.

The father rushed out of the vehicle, and he and a nurse who had been riding in a car behind the float performed CPR on the child, police said.

Video from CNN affiliate KFOR later showed first responders along the road, which appeared to be bordered by trees, and moving a stretcher with the child into an awaiting ambulance.

The boy was later pronounced dead at a hospital, Monroe said.

"Our thoughts today for the family of a 7 yr old boy killed in a float accident at the end of the LibertyFest parade," Edmond police said Thursday in a tweet. "Heartbreaking."

Money Magazine a few years ago listed Edmond, a city of about 81,000 people, as 35th on its list of America's best small cities. The annual LibertyFest festivities around Independence Day -- highlighted by the parade -- was singled out as a "must-go event" in the city, according to the publication, which like CNN is a division of Time Warner. 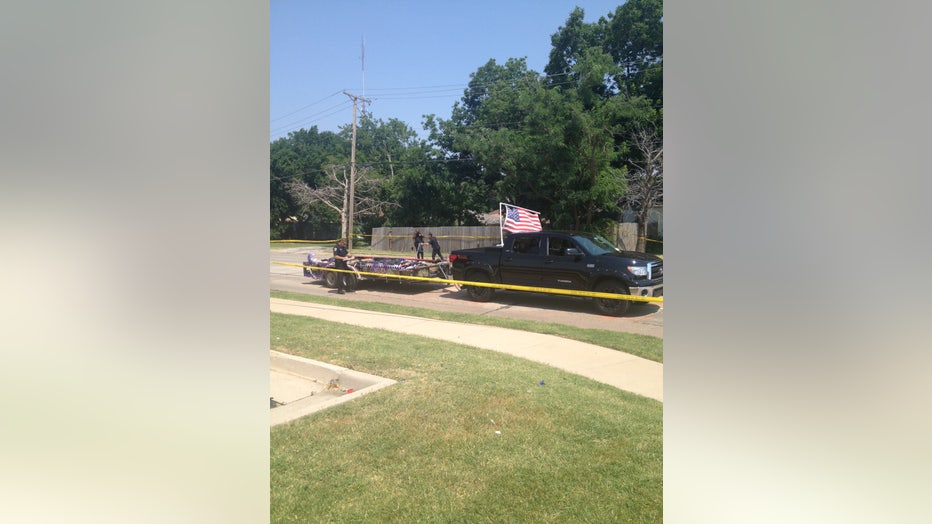 The boy's float had a martial-arts theme, Monroe said.