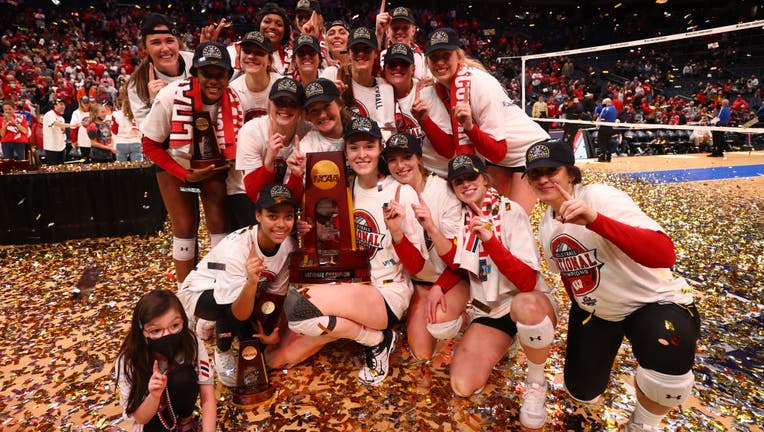 COLUMBUS, OH - DECEMBER 18: Wisconsin Badgers players celebrate their win over the Nebraska Cornhuskers in the Division I Womens Volleyball Championship on December 18, 2021 in Columbus, Ohio. (Photo by Jamie Schwaberow/NCAA Photos via Getty Images)

Rettke also finished with a career-high 13 blocks in her collegiate finale.

"Oh, my God, I cannot believe it," Rettke said in the immediate moments after the win. "I'm just so proud of this team and how we battled and how we fought."

The 6-foot-8 middle blocker showed her value in the decisive second set when she generated three-straight points with a kill and consecutive blocks.

"That's something that we worked so hard on all year. ... just getting those blocks," she said. "Twenty-four blocks — that's insane, that's absolutely insane."

Despite falling behind 2-1, Nebraska fought back to knot it in a spirited fourth set. Wisconsin emerged for the fifth to take a 7-0 lead before the Cornhuskers went on a 7-3 to get back in it. They closed to 14-12 after a review showed a deflection at the net off a Wisconsin defender went out of bounds. The call merely set the stage for Rettke's heroics.

A 9-3 Wisconsin run in the marathon second set brought the Badgers to within 17-16 and they went on to a 31-29 set win to even it one apiece.

Nebraska bolted to a quick 5-1 start in the first set and maintained control in taking it 25-22 despite the Badgers forcing three set-point saves.

In front a championship-record crowd of 18,755 at Nationwide Arena, Wisconsin played in its fourth NCAA final in program history and the second time in the past three years. The Badgers lost championship matches in 2000, 2013 and 2019.

"This was such a hard match to score," Wisconsin coach Kelly Sheffield said. "They just stayed with it."

Wisconsin completed the season sweep of its Big Ten Conference foe having beaten the Cornhuskers in their regular-season matches; 3-0 on Oct. 27 and 3-1 on Nov. 26.

Nebraska was in search of its sixth NCAA title. The 10th-seeded Cornhuskers (26-8) sought to be only the second double-digit seed to win the national title. Stanford accomplished the feat in 2004.

It was the first championship match since 2016 that didn't feature a top-three seed.