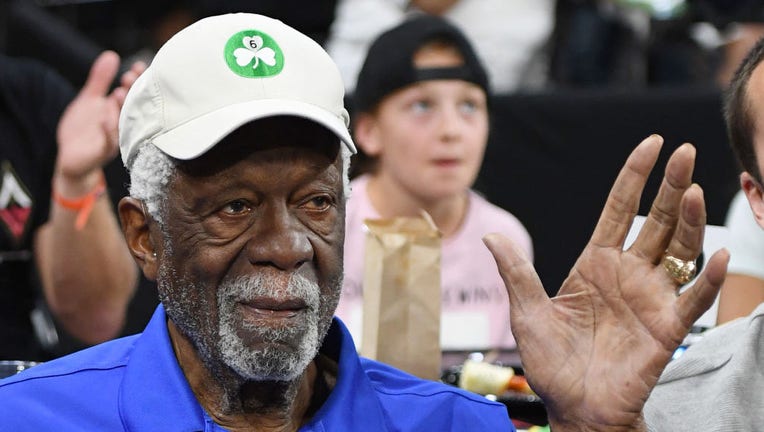 Basketball Hall of Fame member Bill Russell waves as he is introduced at a game between the Minnesota Lynx and the Las Vegas Aces at the Mandalay Bay Events Center on July 21, 2019 in Las Vegas, Nevada. (Photo by Ethan Miller/Getty Images)

BOSTON (AP) - Bill Russell redefined how basketball is played, and then he changed the way sports are viewed in a racially divided country.

The most prolific winner in NBA history, Russell marched with Martin Luther King Jr., supported Muhammad Ali and received the Presidential Medal of Freedom from President Barack Obama. The centerpiece of the Boston Celtics dynasty that won 11 championships in 13 years, Russell earned his last two NBA titles as a player-coach — the first Black coach in any major U.S. sport.

Russell died on Sunday at the age of 88. His family posted the news on social media, saying his wife, Jeannine, was by his side. The statement did not give the cause of death, but Russell was not well enough to present the NBA Finals MVP trophy in June due to a long illness.

"Bill's wife, Jeannine, and his many friends and family thank you for keeping Bill in your prayers. Perhaps you'll relive one or two of the golden moments he gave us, or recall his trademark laugh as he delighted in explaining the real story behind how those moments unfolded," the family statement said. "And we hope each of us can find a new way to act or speak up with Bill's uncompromising, dignified and always constructive commitment to principle.

"That would be one last, and lasting, win for our beloved #6."

NBA Commissioner Adam Silver said in a statement that Russell was "the greatest champion in all of team sports."

"Bill stood for something much bigger than sports: the values of equality, respect and inclusion that he stamped into the DNA of our league. At the height of his athletic career, Bill advocated vigorously for civil rights and social justice, a legacy he passed down to generations of NBA players who followed in his footsteps," Silver said. "Through the taunts, threats and unthinkable adversity, Bill rose above it all and remained true to his belief that everyone deserves to be treated with dignity. 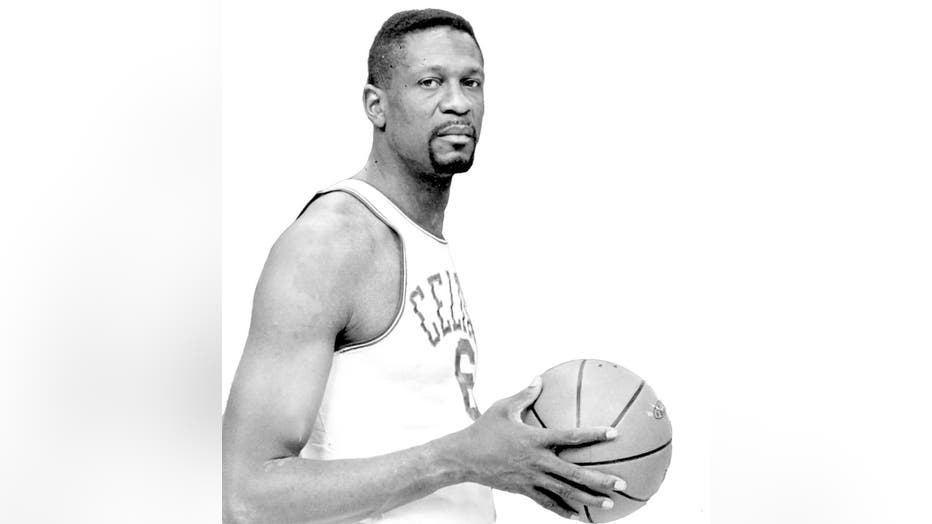 A Hall of Famer, five-time Most Valuable Player and 12-time All-Star, Russell in 1980 was voted the greatest player in the NBA history by basketball writers. He remains the sport’s most decorated champion — he also won two college titles and an Olympic gold medal — and an archetype of selflessness who won with defense and rebounding while others racked up gaudy scoring totals.

Often, that meant Wilt Chamberlain, the only worthy rival of Russell’s era and his prime competition for rebounds, MVP trophies and barroom arguments about who was better. Chamberlain, who died in 1999 at 63, had twice as many points, four MVP trophies of his own and is the only person in league history to grab more rebounds than Russell — 23,924 to 21,620.

But Russell dominated in the only stat he cared about: 11 championships to two.

The native of Louisiana also left a lasting mark as a Black athlete in a city — and country — where race is often a flash point. He was at the March on Washington in 1963, when King gave his "I Have a Dream" speech, and he backed Muhammad Ali when the boxer was pilloried for refusing induction into the military draft.

"To be the greatest champion in your sport, to revolutionize the way the game is played, and to be a societal leader all at once seems unthinkable, but that is who Bill Russell was," the Boston Celtics said in a statement. 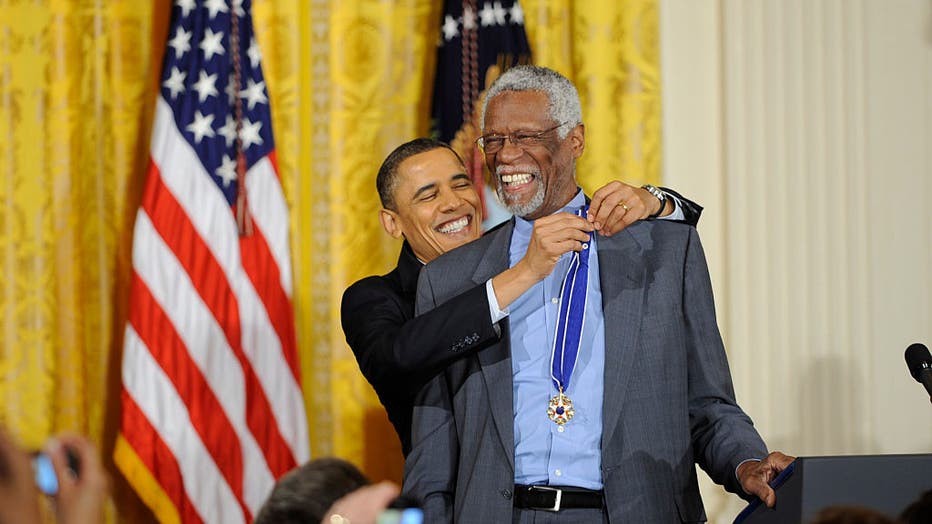 "Bill Russell, the man, is someone who stood up for the rights and dignity of all men," Obama said at the ceremony. "He marched with King; he stood by Ali. When a restaurant refused to serve the Black Celtics, he refused to play in the scheduled game. He endured insults and vandalism, but he kept on focusing on making the teammates who he loved better players and made possible the success of so many who would follow."

Russell said that when he was growing up in the segregated South and later California his parents instilled in him the calm confidence that allowed him to brush off racist taunts.

"Years later, people asked me what I had to go through," Russell said in 2008. "Unfortunately, or fortunately, I’ve never been through anything. From my first moment of being alive was the notion that my mother and father loved me." It was Russell’s mother who would tell him to disregard comments from those who might see him playing in the yard.

"Whatever they say, good or bad, they don’t know you," he recalled her saying. "They’re wrestling with their own demons."

But it was Jackie Robinson who gave Russell a road map for dealing with racism in his sport: "Jackie was a hero to us. He always conducted himself as a man. He showed me the way to be a man in professional sports."

The feeling was mutual, Russell learned, when Robinson’s widow, Rachel, called and asked him to be a pallbearer at her husband’s funeral in 1972.

"She hung the phone up and I asked myself, ‘How do you get to be a hero to Jackie Robinson?’" Russell said. "I was so flattered."

Jackie Robinson was far from the first Black man to play in the major leagues. Here are the four Black men who preceded him.

RELATED: On Jackie Robinson Day, remember the Black men who played in the majors before he broke the color barrier

William Felton Russell was born on Feb. 12, 1934, in Monroe, Louisiana. He was a child when his family moved to the West Coast, and he went to high school in Oakland, California, and then the University of San Francisco. He led the Dons to NCAA championships in 1955 and 1956 and won a gold medal in 1956 at the Melbourne Olympics in Australia. 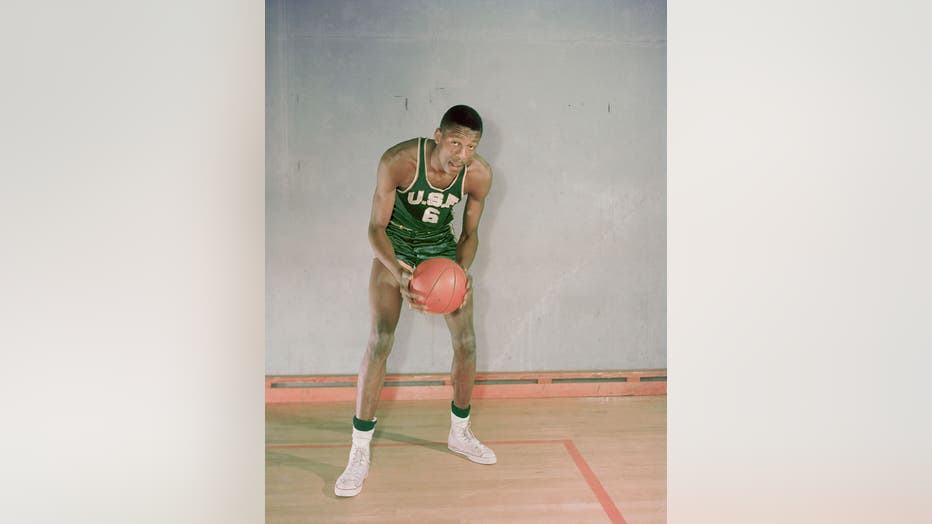 Celtics coach and general manager Red Auerbach so coveted Russell that he worked out a trade with the St. Louis Hawks for the second pick in the draft. He promised the Rochester Royals, who owned the No. 1 pick, a lucrative visit by the Ice Capades, which were also run by Celtics owner Walter Brown.

Still, Russell arrived in Boston to complaints that he wasn’t that good. "People said it was a wasted draft choice, wasted money," he recalled. "They said, ‘He’s no good. All he can do is block shots and rebound.’ And Red said, ‘That’s enough.’" 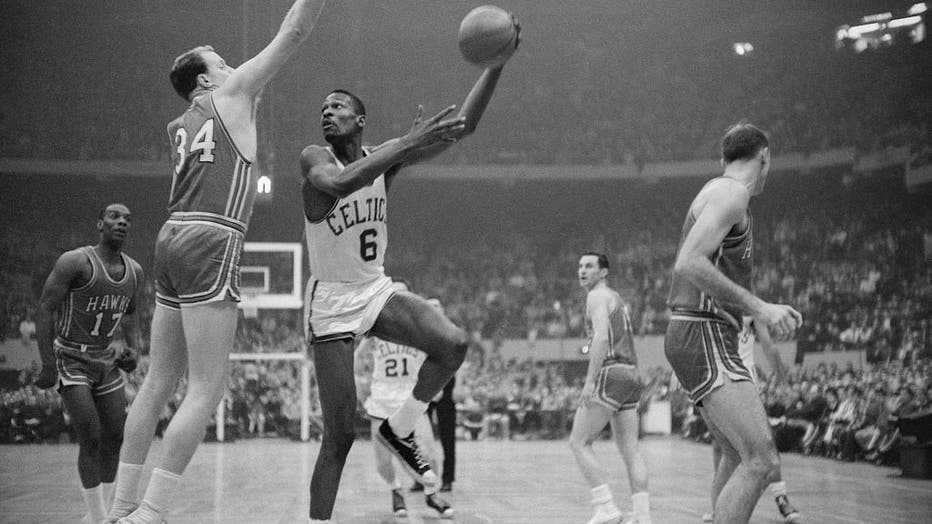 Boston Celtics' player Bill Russell hooks a shot during the NBA championship's final game in 1960 against the Saint Louis Hawks. (via Getty Images)

The Celtics also picked up Tommy Heinsohn and K.C. Jones, Russell’s college teammate, in the same draft. Although Russell joined the team late because he was leading the U.S. to the Olympic gold, Boston finished the regular season with the league’s best record.

The Celtics won the NBA championship — their first of 17 — in a double-overtime seventh game against Bob Pettit’s St. Louis Hawks. Russell won his first MVP award the next season, but the Hawks won the title in a finals rematch. The Celtics won it all again in 1959, starting an unprecedented string of eight consecutive NBA crowns.

A 6-foot-10 center, Russell never averaged more than 18.9 points during his 13 seasons, each year averaging more rebounds per game than points. For 10 seasons he averaged more than 20 rebounds. He once had 51 rebounds in a game; Chamberlain holds the record with 55.

Auerbach retired after winning the 1966 title, and Russell became the player-coach — the first Black head coach in NBA history, and almost a decade before Frank Robinson took over baseball’s Cleveland Indians. Boston finished with the second-best regular-season record in the NBA, and its title streak ended with a loss to Chamberlain and the Philadelphia 76ers in the Eastern Division finals.

Russell led the Celtics back to titles in 1968 and ’69, each time winning seven-game playoff series against Chamberlain. Russell retired after the ’69 finals, returning for a relatively successful — but unfulfilling —- four-year stint as coach and GM of the Seattle SuperSonics and a less fruitful half season as coach of the Sacramento Kings.

In 2009, the MVP trophy of the NBA Finals was named in his honor — even though Russell never won himself, because it wasn’t awarded for the first time until 1969. Russell, however, traditionally presented the trophy for many years, the last time in 2019 to Kawhi Leonard; Russell was not there in 2020 because of the NBA bubble nor in 2021 due to COVID-19 concerns. 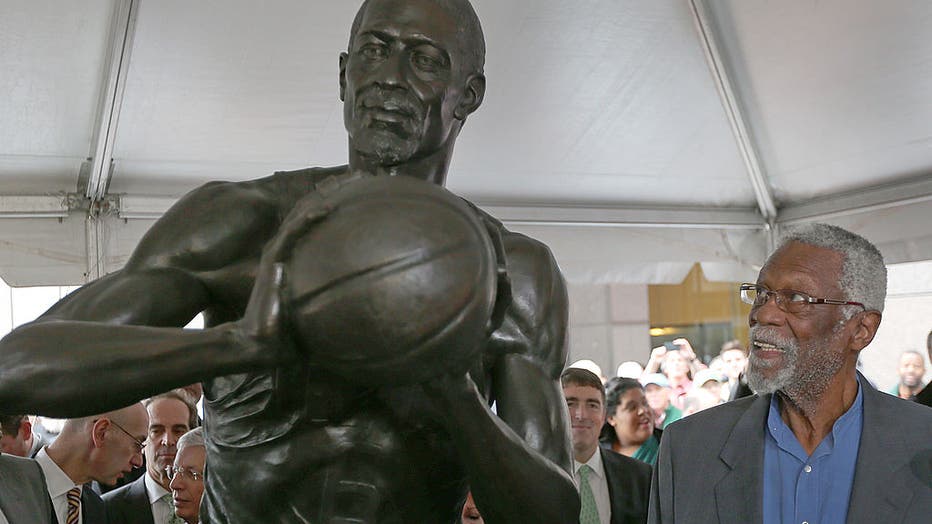 In 2013, a statue was unveiled on Boston’s City Hall Plaza of Russell surrounded by blocks of granite with quotes on leadership and character. Russell was inducted into the Basketball Hall of Fame in 1975 but did not attend the ceremony, saying he should not have been the first African American elected. (Chuck Cooper, the NBA’s first Black player, was his choice.)

In 2019, Russell accepted his Hall of Fame ring in a private gathering. "I felt others before me should have had that honor," he tweeted. "Good to see progress."

"Bill was the ultimate winner and consummate teammate, and his influence on the NBA will be felt forever," Silver added. "We send our deepest condolences to his wife, Jeannine, his family and his many friends."

His family said that arrangements for Russell's memorial service will be announced in the coming days.