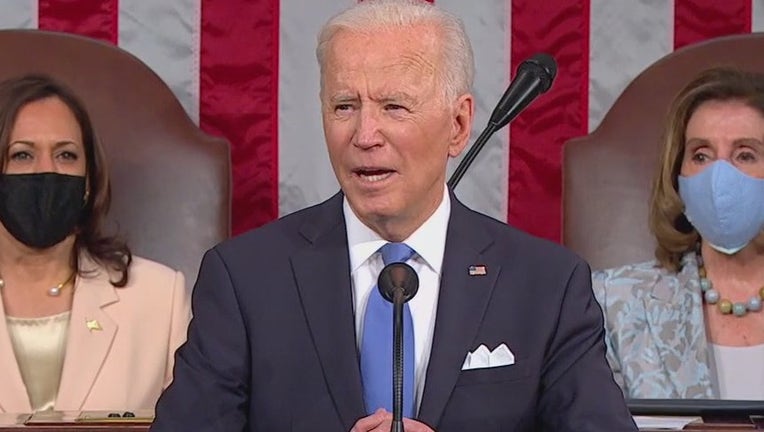 The president unveiled his American Families Plan which would offer free preschool and free two years of community college. The president urged Congress to raise the minimum wage to $15 per hour and called for lawmakers to pass policing changes.

President Biden's first speech to a joint session of Congress, not a State of the Union during the first year of a presidency -- amid the pandemic.

"America is on the move again," President Biden said. "Go get the vaccination."

The first lady’s box was empty, though she hosted virtually five people — including two from Wisconsin.

"It’s surreal. I’m just shocked. It’s honestly just such an honor to be able to share my story and represent other gun violence survivors around this country. It’s truly an honor," Tatiana Washington said, a virtual guest of the first lady.

"A high school degree is simply not enough to get a family-supporting job in our current economy," Sen. Baldwin said.

Senator Baldwin got one of the rare tickets, while representative Bryan Steil watched in Janesville.

"For the first 100 days, we’ve seen a lot of bipartisan rhetoric, but a lot of partisan legislation," Rep. Steil said.

The president called on Congress to change policing and immigration and called on Americans to come together and heal the soul of the nation.

And Republicans have criticized these proposals for wasteful spending. The president is proposing raising taxes on the wealthiest Americans while raising capital gains and other taxes.

The vice president will make this pitch to the people in Milwaukee next Tuesday.

"Our nation is starving for more than empty platitudes," Rep. Tim Scott said. "The actions are pulling us further and further apart."

A judge ruled Thursday that Republican leaders of the Wisconsin Legislature illegally hired private taxpayer-funded attorneys to represent them in anticipation of lawsuits over redistricting.

Vice President Kamala Harris will visit Milwaukee on Tuesday, May 4.