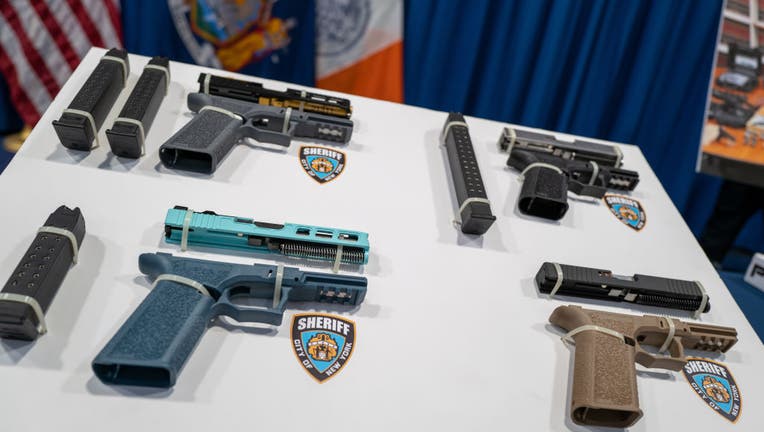 NEW YORK, NEW YORK - JUNE 29: Confiscated "ghost guns" are displayed before a news conference with New York Mayor Eric Adams and Attorney General Letitia James and others to announce a new lawsuit against "ghost gun" distributors on June 29, 2022 in

A new federal rule designed to crack down on "ghost guns," or privately assembled firearms, took effect on Wednesday, the Department of Justice announced.

"These guns have often been sold as build-your-own kits that contain all or almost all of the parts needed to quickly build an unmarked gun. And anyone could sell or buy these guns without a background check," Attorney General Merrick Garland said Wednesday.

"That changes today. This rule will make it harder for criminals and other prohibited persons to obtain untraceable guns. It will help to ensure that law enforcement officers can retrieve the information they need to solve crimes. And it will help reduce the number of untraceable firearms flooding our communities."

President Joe Biden took aim at ghost guns during a speech announcing Steve Dettlebach as his nominee to run the Bureau of Alcohol, Tobacco, Firearms and Explosives. The president, who also called for assault weapons to be banned, announced new federal regulations being finalized that will come down on any manufacturer who makes the parts used for ghost gun kits.

The rule, named "Definition of 'Frame or Receiver' and Identification of Firearms" in the federal register, clarifies which parts of a weapon must be marked with a serial number, mandates that background checks are run on homemade kits, and requires gun retailers to retain records for a longer period of time.

The Biden administration has framed the rule as part of an effort to crack down on crime.

"The United States Department of Justice is making it illegal for a business to manufacture on of these without a serial number," Biden said in April when he originally announced the new rules. "These guns are weapons of choice for many criminals."

From 2016 to 2021, the Bureau of Alcohol, Tobacco, Firearms and Explosives received more than 45,000 privately made firearms from law enforcement, according to the DOJ.