Following his slap of Chris Rock at the Oscars, Will Smith has been banned from attending the annual awards show and any other academy event for 10 years.

The motion picture academy’s decision was announced last week after Smith pre-emptively resigned from the academy during the run-up to the meeting, calling his actions "shocking, painful, and inexcusable."

"I accept and respect the Academy’s decision," Smith said in the aftermath.

Meanwhile, talk of whether Smith should have to return the Best Actor Oscar he won for "King Richard" is ongoing, but only one Oscar has ever been revoked in the award’s 94-year history.

In 1969, the Oscar for the documentary "Young Americans" was rescinded because it was deemed to be ineligible for that year.

Smith will likely be keeping the Oscar he won, and will remain eligible to be nominated for and win more of them in the 10-year period he’s banned from the show, though he wouldn’t be able to show up to accept the award — virtually or in person. 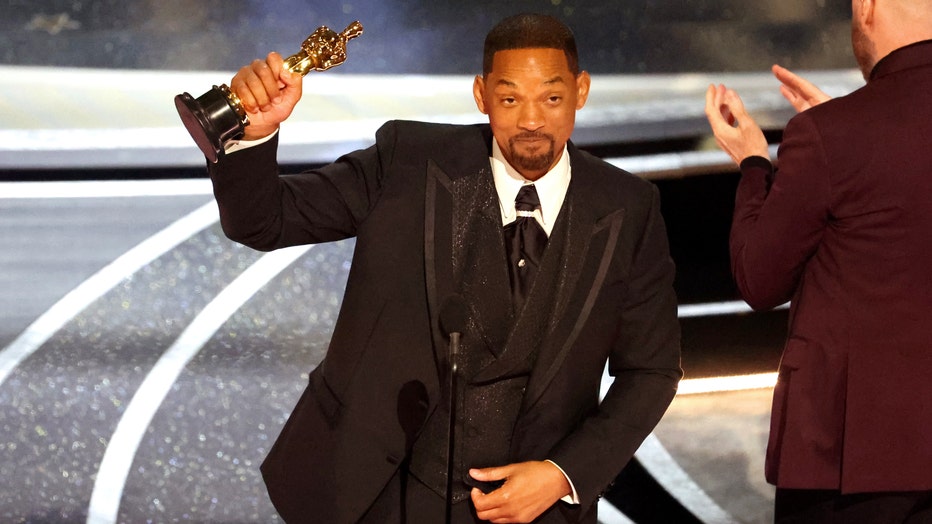 Will Smith accepts the award for Best Actor in a Leading Role for "King Richard" during the show at the 94th Academy Awards at the Dolby Theatre at Ovation Hollywood on Sunday, March 27, 2022. (Myung Chun / Los Angeles Times via Getty Images)

Smith isn’t the first person to face this punishment.

A handful of other notable celebrities and filmmakers have either been banned from attending academy events — like Smith — or gotten expelled from the academy altogether:

Disgraced movie mogul Harvey Weinstein’s membership ended abruptly in October 2017 after reports by The New York Times and The New Yorker about sexual harassment and rape allegations against Weinstein went back decades.

Those reports, which prompted other accusers to come forward, led to Weinstein being convicted of rape in New York and sentenced to 23 years in prison. He’s also charged with 10 counts of rape and assault in California, where he could face an additional 140-year sentence.

Oscar-winning director Roman Polanski was expelled from the Academy in 2018, more than 40 years after he was accused of raping a 13-year-old girl he plied with champagne and Quaaludes during a photoshoot, and 15 years after he won a best director Oscar.

Polanski, who won the Oscar for best director for 2002′s "The Pianist," remains a fugitive after pleading guilty to unlawful sex with a minor in 1977 and fleeing the United States the following year.

He served three years of a 10-year sentence before his conviction was overturned by Pennsylvania’s highest court. Cosby was released from prison in October 2021.

He got the boot in 2004 after he was caught sharing "screening" copies of movies that were later bootlegged.

FOX News and The Associated Press contributed to this report.