History of pumpkin spice in America

From pumpkin spice lattes to pumpkin-flavored doughnuts, it's clear the flavor is now an autumn staple of the American diet. (Photo credit: Anheuser-Busch)

This week marks the official start of fall, as the Northern Hemisphere bids farewell to warmer weather and ushers in cooler temperatures, fall foliage and all things pumpkin spice.

The autumnal equinox of 2021, also known as the September equinox or fall equinox, is on Wednesday, Sept. 22, according to the Farmer’s Almanac. The date marks the start of fall in the Northern Hemisphere and spring in the Southern Hemisphere.

On the equinox, daytime and nighttime are roughly equal in length.

What time is the 2021 autumnal equinox?

The autumnal equinox officially arrives at 3:20 p.m. ET on Wednesday.

During the equinox — which occurs twice per year — the sun crosses what’s known as the "celestial equator," or an extension of Earth’s equator line into space, the Farmer’s Almanac explains.

The autumnal equinox occurs when the sun crosses the equator from north to south. The vernal equinox, or the start of spring, happens when it moves from south to north.

A full moon, known as the Harvest Moon, preceded the start of fall. The moon appeared full for about three days, starting on Sunday morning through Tuesday morning.

RELATED: How to see the harvest moon

What is "meteorological fall?"

While fall doesn’t officially start until mid-September on the autumnal equinox, known as "astronomical fall," there is also a "meteorological fall" that begins on Sept. 1.

Meteorologists divide the year up into four seasons based on the annual temperature cycle, while astronomers determine the seasons by the Earth’s tilt, according to the Farmer’s Almanac.

For example, the fall season for meteorologists begins Sept. 1 through Nov. 30. The winter season starts on Dec. 1 and ends on the last day in February.

When will the leaves start to change colors?

Some consider fall to be the most beautiful time of year as the leaves change to beautiful colors of red, purple, orange and yellow. A fall foliage prediction map for 2021 by SmokyMountains.com lets people toggle over dates to see progressive changes of the leaves across the U.S.

Depending on the region, some trees reach their peak fall foliage as early as mid-September. Other trees aren’t until mid-November in parts of the U.S. South. 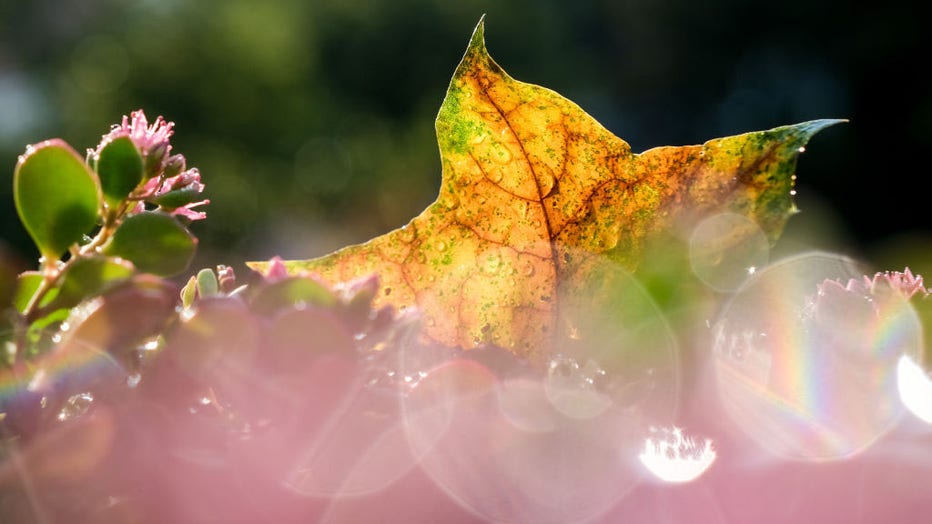 FILE - An autumn-colored maple leaf is stuck in a garden in the light of the setting sun on Sept. 10, 2021, in Berlin, Germany. (Photo by Jens Kalaene/picture alliance via Getty Images)

Why do leaves change color in the fall?

Chlorophyll helps plants create their own food through photosynthesis, and the constant creation of chlorophyll in leaves results in their hues of green through spring and summer, according to the College of Environmental Science and Forestry at the State University of New York (SUNY).

"But in the fall, because of changes in the length of daylight and changes in temperature, the leaves stop their food-making process. The chlorophyll breaks down, the green color disappears, and the yellow to orange colors become visible and give the leaves part of their fall splendor," the college explains on its website.

This, combined with other changes in the trees, results in the fall colors that appear.

As the freezing temperatures of winter approach, some trees protect themselves by slowly closing off the veins that carry water and nutrients to and from the leaves with a layer of new cells that form at the base of the leaf stem, according to SmokyMountains.com. This, in turn, protects the limbs and body of the tree.