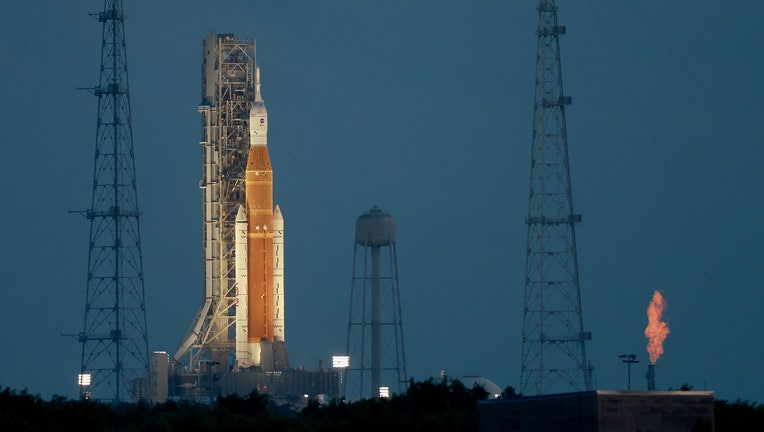 CAPE CANAVERAL, Fla. - NASA has delayed Tuesday’s launch of the Artemis I moon rocket as Florida prepares for a potentially major hurricane. It’s the third time the rocket launch has been pushed back.

Tropical Storm Ian formed Friday in the Caribbean Sea, and much of the Florida peninsula is already included in the cone of uncertainty for what could become a major hurricane in the days ahead.

NASA officials are preparing to roll the rocket back into the hangar at Kennedy Space Center, a move that takes a lot of time and personnel and adds "routine wear and tear" that NASA has tried to avoid. But project managers said they won’t make a final decision about rolling the rocket back until Sunday. If the rollback is approved, it would start late Sunday night or early Monday morning.

Managers on Friday declared that the rocket is now ready to blast off on its first test flight, after overcoming more hydrogen leaks during a fueling test earlier in the week.

There already have been three trips to the launchpad this year for practice countdowns and, most recently, the thwarted launch attempts of Aug. 29 and Sept. 3. The window for this launch attempt closes Oct. 4, and Sept. 29 and 30 are not available launch days, NASA said in early September.

The Space Launch System rocket — the most powerful ever built by NASA — holds a crew capsule with three test dummies. The space agency wants to send the capsule into lunar orbit on a trial run, before putting astronauts on the next flight, in 2024. That around-the-moon mission would pave the way for the first human moon landing in 50 years, currently scheduled for 2025.

NASA aims to send astronauts around the moon as part of the Artemis project.

Running years late and billions over budget, NASA’s new lunar exploration program is named Artemis after Apollo’s twin sister in Greek mythology. Twelve astronauts walked on the moon back in the late 1960s and early 1970s during NASA's Apollo program.

FOX Weather, FOX 35 and The Associated Press contributed to this report.