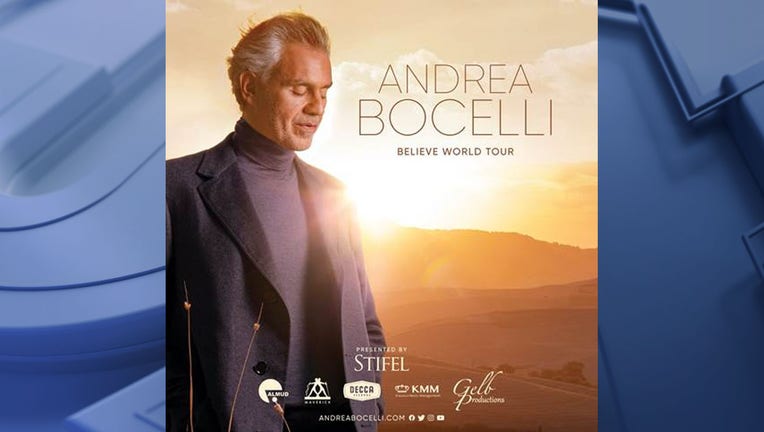 Bocelli's 21-city tour kicks off Wednesday, October 13, in Milwaukee at Fiserv Forum. Tickets go on sale to the general public Monday, May 3 at 10 a.m.

The tour will feature performances from Bocelli’s uplifting new album Believe, a poignant and personal collection of songs, celebrating the power of music to soothe the soul, as well as a selection of arias, his beloved cross-over hits and famed love songs.

After a year of Bocelli’s record-breaking live-streamed performances that brought comfort to viewers around the globe, Bocelli is bringing his blockbuster live show to U.S. audiences.

As one of the most recognizable voices in the industry, Andrea Bocelli has been thrilling audiences for over 20 years, counting nearly 90 million records sold worldwide. Bocelli is one of the most celebrated singers in modern history, performing at major international events including the Olympic Games and the World Cup, as well as his own sell-out arena shows around the world.

He has a Golden Globe, seven Classical BRITs and seven World Music Awards under his belt, plus a star on the Hollywood Walk of Fame. His previous album, Si, reached No.1 on both the US and UK charts.

"It will be like going home, in each of the 21 cities," said Bocelli. "It will be exciting to meet again with the public of my beloved and great homeland who adopted me over 20 years ago."

For ticket information, head to FiservForum.com.

Additionally, the Andrea Bocelli Foundation and "Believe" U.S. tour is proud to partner with PLUS1 so that $1 from every ticket sale throughout the tour will go toward empowering people and communities in situations of poverty, illiteracy, and distress due to illness and social exclusion. More at andreabocellifoundation.org and plus1.org.

As COVID-19 vaccine availability continues to expand, some providers are alerting the community to open appointments they are hoping to fill.