Milwaukee Bucks executive and Democrat Alex Lasry announced he is dropping out of Wisconsin's U.S. Senate race and officially backing Mandela Barnes in the Democratic primary.

MILWAUKEE - With Wisconsin already voting in the August primary, Alex Lasry is dropping out of Wisconsin's Democratic primary for U.S. Senate, and backing his competitor, Lt. Gov. Mandela Barnes.

Lasry told FOX6 the decision to end his 17-month run was all about the numbers.

"I don’t think that we lost," said Lasry. "Mandela won, and that’s something that, I think, we can leave this race with our head held high knowing that we ran a race that was positive. And I think because of our primary campaign, that’s going to be, I think, a big reason as to why we’re able to win in November."

The announcement came less than two weeks ahead of the Aug. 9 primary, so voters will see Lasry's name still on the ballot.

Alex Lasry announces he is dropping out of the Wisconsin race for US Senate, backing Mandela Barnes

Alex Lasry announces he is dropping out of the Wisconsin race for US Senate, backing Mandela Barnes.

A June Marquette University Law School poll had Barnes just a few points ahead of Lasry, with Wisconsin Treasurer Sarah Godlewski behind them:

"When we realized there was no pathway forward to win, this became a simple decision, and it was made easier by knowing the person that I was getting behind," said Lasry.

The two competitors, who each call the other a friend, joined together outside Fiserv Forum, as Lasry officially dropped out and backed Barnes.

"I’m incredibly proud to have your support in this race because, together, we are going to get this done," said Barnes. "I’m lucky to call you ‘friend.’ This year, we have the chance to finally get rid of Scott Walker, one of the worst senators this state has ever had, and I know this is going to be tough. This is going to be difficult. It’s going to be an uphill battle, but I know it will be that much easier because we’re in this together."

No, Walker is not in this race. If Barnes wins the primary, he'll actually go up against Republican Senator Ron Johnson in November.

On Twitter, former Wisconsin Governor Scott Walker commented on the mistake. "Living rent free in the head of [Barnes]. I hope he doesn’t expect me to pay his property tax bill."

Barnes used the mistake to take aim at both Walker and Johnson. "Ope! I got two anti-union, pro-outsourcing, self-serving politicians mixed up there for a second," Barnes wrote on Twitter. "They sure have a lot in common — but most of all, that I'm going to send Ron Johnson packing just like Tony Evers and I sent Walker packing in 2018."

Lasry pumped more than $12 million of his money into his own campaign, including some in recent weeks.

FOX6'S Jason Calvi questioned Lasry on the sudden departure from the race: "Was there some sort of opposition research that maybe led you to say ‘I got to get out of this race?’"

"There was no opposition research," responded Lasry. "There was no, nothing. What we saw was the data, and I can’t thank the people who voted for me and supported this campaign enough and there’s no one more disappointed and hurt by my not being able to come through to them than me."

"At the end of the day, we have a late primary, and we’ve got to make sure every day is spent defeating Ron Johnson," Lasry added. "And when there was no path to victory, we knew we had to get behind someone who can win."

He's the second Democratic to drop out of the Senate primary this week and back Barnes. First was Outagamie County Executive Tom Nelson.

Lasry is a Milwaukee Bucks executive and his father is a co-owner of the team. Lasry was on leave during the campaign, but he told FOX6 he'll be returning to the team. First, he said he wants to spend time with his wife and baby girl. 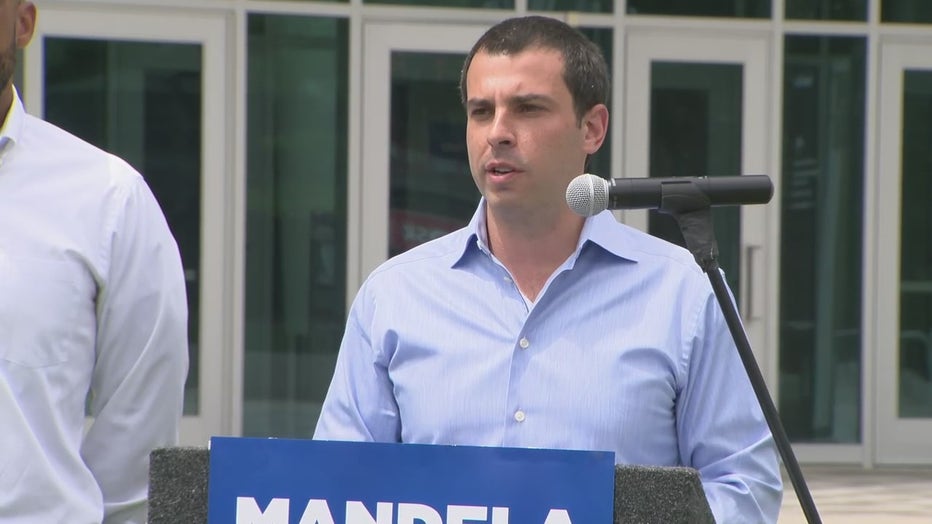 That leaves those already voting for him with questions.

"That should have been done before early voting," said Mary Jane, about Lasry's exit from the race after she voted for him.

If you already turned in your vote for Lasry, there is a process where you can "spoil" your absentee ballot, and that's what Mary Jane did.

Voted for Lasry? How to ‘spoil’ your ballot

According to the Wisconsin Elections Commission, a voter may spoil their ballot and receive a new one. Voters can consult their local clerk about the process. It involves officially requesting the clerk revoke the old ballot and then issue a new one. This voter can also spoil their already-returned ballot and vote in person, but the request has to be made by the deadline below.

There are deadlines to request a ballot be spoiled. "Once that deadline has passed, a returned absentee ballot cannot be changed, and the voter cannot be issued another ballot on Election Day." Likewise, a voter who has returned their ballot, but which hasn't been delivered back to the clerk, cannot request a new ballot.

That deadline to request spoiling a ballot is the last day the clerk offers early, in-person voting. For those voting by mail, the deadline is 5 p.m. on Thursday, August 4.

Reaction to Lasry dropping out of the race

"It's clear Democrats are uniform in their support for more of the same Biden policies that got us in this mess in the first place: runaway spending, the Green New Deal, defunding the police and abolishing ICE. That vision for the future will be a tough sell for so many Wisconsin families that are already suffering from record inflation, high gas prices, out of control crime and an unsecured border."

"It's clear Tom Nelson graciously stepping aside to endorse Mandela Barnes meant Alex Lasry had no path to victory. Now we will all work together to unite behind Mandela Barnes and defeat America's worst senator in Ron Johnson."