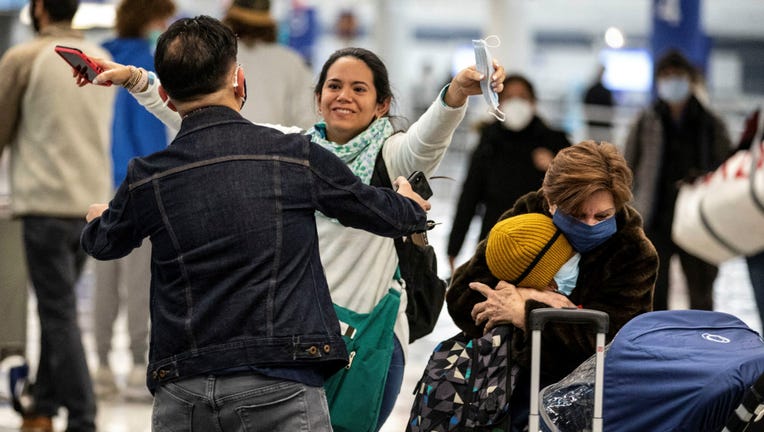 Travelers are greeted at O'Hare International Airport in Chicago, the United States, on Nov. 25, 2020. (Xinhua/Joel Lerner via Getty Images)

Leading airline and business groups are asking the Biden administration to develop temporary credentials that would let travelers show they have been tested and vaccinated for COVID-19, a step that the airline industry believes will help revive travel.

Various groups and countries are working on developing so-called vaccine passports aimed at allowing more travel. But airlines fear that a smattering of regional credentials will cause confusion and none will be widely accepted.

"It is crucial to establish uniform guidance" and "the U.S. must be a leader in this development," more than two dozen groups said in a letter Monday to White House coronavirus-response coordinator Jeff Zients. However, the groups said that vaccination should not be a requirement for domestic or international travel.

The groups include the main U.S. and international airline trade organizations, airline labor unions and the U.S. Chamber of Commerce. The White House did not immediately comment.

The World Health Organization and the United Nations' aviation arm are working on the type of information to include in a credential. The airline industry groups said U.S. agencies, including the Centers for Disease Control and Prevention, should figure out how to rollout recommended travel documentations that verify passengers' testing and vaccination records.

The groups said if the CDC takes a leading role, it would increase certainty that test results are legitimate, helping the airline industry and strengthening protections against spread of the virus.

Airlines have been particularly hard hit by the pandemic. Despite a partial recovery, U.S. airlines are still losing $150 million a day, according to the Airlines for America trade group.

In the U.S., the number of people going through airports remains down nearly 60% so far this year compared to 2019, the last normal, pre-pandemic year. Most of those people are flying within the United States.

Airlines are counting on widespread vaccinations to boost travel, and for vaccine passports to give a boost to highly lucrative international flying.