WASHINGTON — Exulting in his impeachment acquittal, a defiant President Donald Trump took a scorched-earth victory lap Thursday, unleashing his fury against those who tried to remove him from office and pointing ahead to his reelection campaign.

President Trump, triumphantly waving a newspaper front page — “ACQUITTED” — declared the impeachment proceedings a “disgrace” and portrayed himself as a victim of political foes he labeled "scum," “sleaze bags” and “horrible” people. Hours earlier, he unleashed broadsides that stunned the crowd at an annual prayer breakfast.

“It was evil, it was corrupt," President Trump declared at the White House. “This should never ever happen to another president, ever.”

He conceded nothing in regard to charges that he improperly withheld U.S. military aid in an effort to pressure Ukraine to investigate Democratic foe Joe Biden and other political matters.

“We went through hell, unfairly," he insisted. "We did nothing wrong.”

Venting for more than an hour, President Trump railed against the impeachment process and ticked off names of the “vicious and mean" people he felt had wronged him: House Speaker Nancy Pelosi, Intelligence Committee Chairman Adam Schiff and former FBI Director James Comey. But then he reveled in the 52-48 verdict on the abuse of power article of impeachment delivered by the GOP-controlled Senate the day before.

“Now we have that gorgeous word. I never thought it would sound so good," President Trump said. Ït's called ‘total acquittal.’”

As President Trump spoke, the White House East Room was packed with hundreds of supporters. Among them: Republican senators who voted to acquit him, Cabinet members and staunch House allies. 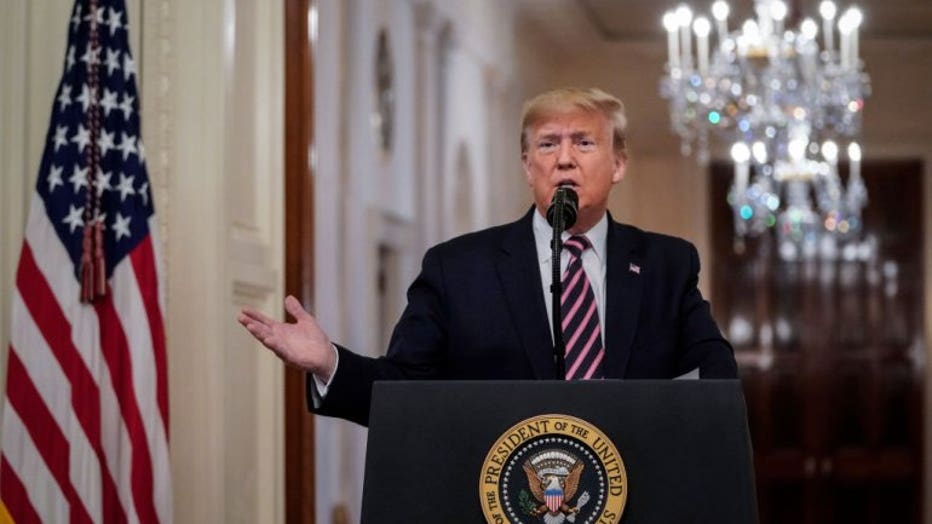 WASHINGTON, DC - FEBRUARY 6: U.S. President Donald Trump speaks to the media in the East Room of the White House one day after the U.S. Senate acquitted him on two articles of impeachment, on February 6, 2020 in Washington, DC. After five months of c

President Trump's at-times angry speech pushed beyond his State of the Union address two nights earlier, during which he stuck to the script and made no mention of impeachment. Not using a teleprompter this time, President Trump delivered rambling remarks saluting “a great group of warriors,” name-checking GOP lawmakers who had backed him both in the Capitol and on television.

He declared that the Republican Party had never been more unified and predicted momentum from the acquittal would carry him to reelection this November. But he also predicted that he may have to fend off another impeachment challenge, perhaps for something as trivial as jaywalking.

“We’ll probably have to do it again because these people have gone stone-cold crazy," the president said. 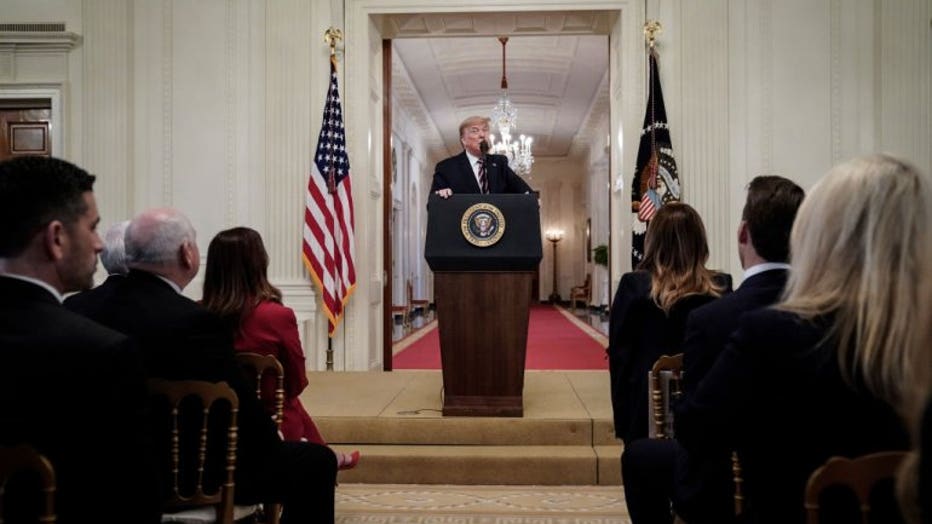 WASHINGTON, DC - FEBRUARY 6: U.S. President Donald Trump speaks to the media in the East Room of the White House one day after the U.S. Senate acquitted him on two articles of impeachment, on February 6, 2020 in Washington, DC. After five months of c

Earlier, speaking from a stage where he was joined by congressional leaders, including Democratic House Speaker Nancy Pelosi, who led the impeachment charge against him, President Trump shattered the usual veneer of bipartisanship at the National Prayer Breakfast in Washington.

“As everybody knows, my family, our great country and your president have been put through a terrible ordeal by some very dishonest and corrupt people," President Trump said at the annual event.

“They have done everything possible to destroy us and by so doing very badly hurt our nation,” said President Trump, again holding up newspapers with banner “ACQUITTED” headlines.

His remarks were especially jarring and whiplash-inducing coming after a series of scripture-quoting speeches, including a keynote address by Arthur Brooks, a Harvard professor and president of a conservative think tank, who had bemoaned a “crisis of contempt and polarization” in the nation and urged those gathered to ”love your enemies."

“I don't know if I agree with you,” President Trump said as he took the microphone, and then he proceeded to demonstrate it.

“I don't like people who use their faith as justification for doing what they know is wrong," he said in an apparent reference to Utah Sen. Mitt Romney, a longtime President Trump critic who cited his faith in becoming the only Republican to vote for President Trump's removal.

“Nor do I like people who say 'I pray for you' when you know that is not so,'” he said, in a reference to Pelosi, who has offered that message for the president when the two leaders have sparred publicly.

The House speaker shook her head at various points during President Trump's remarks, but did not appear to interact with President Trump personally. Earlier she had offered a prayer for the poor and the persecuted.

At the White House later, President Trump defended his prayer breakfast attacks on Pelosi, saying “I had Nancy Pelosi sitting four seats away and I'm saying things a lot of people wouldn't have said. I meant every word.”

Pelosi said that President Trump's remarks were “so completely inappropriate, especially at a prayer breakfast..” She took particular issue with his swipe at Romney's faith and said that yes, she does pray for the president.

His comments were a clear sign that the post-impeachment President Trump is emboldened like never before as he barrels ahead in his reelection fight with a united Republican Party behind him. And they stood in stark contrast to the apology offered by Bill Clinton in the aftermath of his own impeachment acquittal in 1999.

Clinton said then in a White House address: “I want to say again to the American people how profoundly sorry I am for what I said and did to trigger these events and the great burden they have imposed on the Congress and on the American people."

The only contrition President Trump offered was to his own family, saying, "I want to apologize to my family for having them go through a phony rotten deal."

Instead, President Trump defended his call with Ukraine's president — again calling it “perfect”— that Democrats used as the starting point to launch impeachment proceedings against the president for pressuring a foreign government to investigate a political foe.

The president and his allies have been on a victory lap since Wednesday.

Indeed, the night of the impeachment vote was one of revelry for members of the president’s circle. In Washington, many, including President Trump's eldest son, Donald Trump Jr, his girlfriend, former Fox News host Kimberly Guilfoyle, and the president’s former campaign manager, Corey Lewandowski, gathered at the president’s hotel a few blocks from the White House, one of the few MAGA safe zones in the deeply Democratic city.

The president himself remained at the White House but worked the phones, calling confidants.