KABUL, Afghanistan - The United States on Monday completed its withdrawal from Afghanistan, ending America’s longest war and closing a chapter in military history likely to be remembered for colossal failures, unfulfilled promises and a frantic final exit that cost the lives of more than 180 Afghans and 13 U.S. service members, some barely older than the war.

Hours ahead of President Joe Biden's Tuesday deadline for shutting down a final airlift, and thus ending the U.S. war, Air Force transport planes carried a remaining contingent of troops from Kabul airport. Thousands of troops had spent a harrowing two weeks protecting a hurried and risky airlift of tens of thousands of Afghans, Americans and others seeking to escape a country once again ruled by Taliban militants.

In announcing the completion of the evacuation and war effort, Gen. Frank McKenzie, head of U.S. Central Command, said the last planes took off from Kabul airport at 3:29 p.m. Washington time, or one minute before midnight in Kabul.

The airport had become a U.S.-controlled island, a last stand in a 20-year war that claimed more than 2,400 American lives.

"This was an incredibly tough, pressurized mission filled with multiple complexities, with active threats the entire time. Our troops displayed grit, discipline and empathy," wrote the Twitter account.

In a statement released Monday evening, Biden thanked all military personnel who worked in the evacuation efforts.

"I want to thank our commanders and the men and women serving under them for their execution of the dangerous retrograde from Afghanistan as scheduled – in the early morning hours of August 31st, Kabul time – with no further loss of American lives. The past 17 days have seen our troops execute the largest airlift in US history, evacuating over 120,000 US citizens, citizens of our allies, and Afghan allies of the United States. They have done it with unmatched courage, professionalism, and resolve. Now, our 20-year military presence in Afghanistan has ended," Biden said. "I urge all Americans to join me in grateful prayer tonight for three things. First, for our troops and diplomats who carried out this mission of mercy in Kabul and at tremendous risk with such unparalleled results: an airlift that evacuated tens of thousands more people than any imagined possible. Second, to the network of volunteers and veterans who helped identify those needing evacuation, guide them to the airport, and provide support along the way. And third, to everyone who is now – and who will – welcome our Afghan allies to their new homes around the world, and in the United States."

The last U.S. planes have departed Afghanistan, marking the end of America's longest war. The Pentagon says 123,000 Americans have been evacuated, but hundreds are remaining in the country.

The closing hours of the evacuation were marked by extraordinary drama. American troops faced the daunting task of getting final evacuees onto planes while also getting themselves and some of their equipment out, even as they monitored repeated threats — and at least two actual attacks — by the Islamic State group's Afghanistan affiliate. A suicide bombing on Aug. 26 killed 13 American service members and some 169 Afghans.

The final pullout fulfilled Biden's pledge to end what he called a "forever war" that began in response to the attacks of Sept. 11, 2001, that killed nearly 3,000 people in New York, Washington and rural Pennsylvania. His decision, announced in April, reflected a national weariness of the Afghanistan conflict. Now he faces condemnation at home and abroad, not so much for ending the war as for his handling of a final evacuation that unfolded in chaos and raised doubts about U.S. credibility.

The U.S. war effort at times seemed to grind on with no endgame in mind, little hope for victory and minimal care by Congress for the way tens of billions of dollars were spent for two decades. The human cost piled up — tens of thousands of Americans injured in addition to the dead, and untold numbers suffering psychological wounds they live with or have not yet recognized they will live with.

More than 1,100 troops from coalition countries and more than 100,000 Afghan forces and civilians died, according to Brown University’s Costs of War project.

In Biden's view the war could have ended 10 years ago with the U.S. killing of Osama bin Laden, whose al-Qaida extremist network planned and executed the 9/11 plot from an Afghanistan sanctuary. Al-Qaida has been vastly diminished, preventing it thus far from again attacking the United States.

Congressional committees, whose interest in the war waned over the years, are expected to hold public hearings on what went wrong in the final months of the U.S. withdrawal. Why, for example, did the administration not begin earlier the evacuation of American citizens as well as Afghans who had helped the U.S. war effort and felt vulnerable to retribution by the Taliban? It wasn’t clear whether any American citizens who wanted to get out were left behind, but untold thousands of at-risk Afghans were. 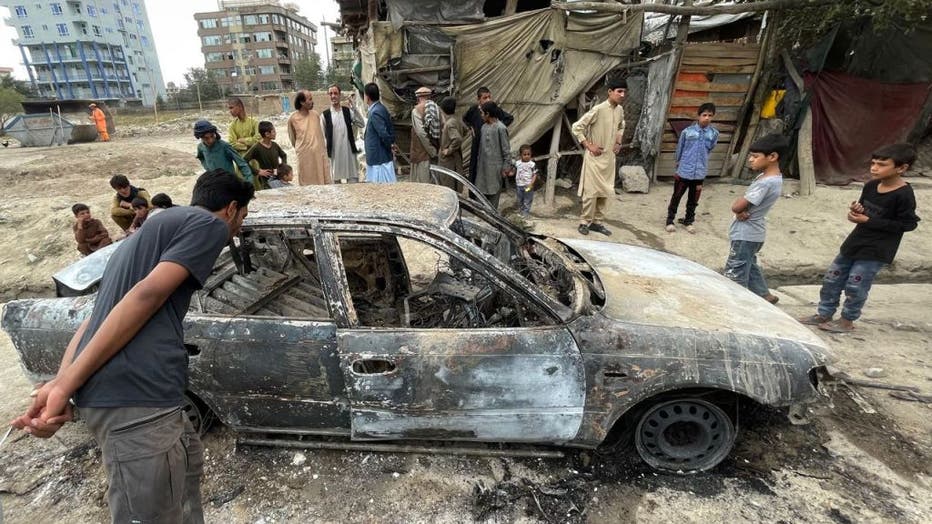 KABUL, AFGHANISTAN - AUGUST 30: A view from the scene after at least five rockets were fired at the Afghan capital Kabul's Hamid Karzai International Airport on Aug. 30, 2021. Local sources confirmed the rockets were fired but intercepted via defense

It was not supposed to end this way. The administration's plan, after declaring its intention to withdraw all combat troops, was to keep the U.S. Embassy in Kabul open, protected by a force of about 650 U.S. troops, including a contingent that would secure the airport along with partner countries. Washington planned to give the now-defunct Afghan government billions more to prop up its army.

The final U.S. exit included the withdrawal of its diplomats, although the State Department has left open the possibility of resuming some level of diplomacy with the Taliban depending on how they conduct themselves in establishing a government and adhering to international pleas for the protection of human rights.

The speed with which the Taliban captured Kabul on Aug. 15 caught the Biden administration by surprise. It forced the U.S. to empty its embassy and frantically accelerate an evacuation effort that featured an extraordinary airlift executed mainly by the U.S. Air Force, with American ground forces protecting the airfield. The airlift began in such chaos that a number of Afghans died on the airfield, including at least one who attempted to cling to the airframe of a C-17 transport plane as it sped down the runway.

By the evacuation's conclusion, well over 100,000 people, mostly Afghans, had been flown to safety. The dangers of carrying out such a mission while surrounded by the newly victorious Taliban and faced with attacks by the Islamic State came into tragic focus on Aug. 26 when an IS suicide bomber detonated himself at an airport gate, killing at least 169 Afghans and 13 Americans.

RELATED: US drone strike against ISIS-K in Afghanistan won't be the last, Biden says

Speaking shortly after that attack, Biden stuck to his view that ending the war was the right move. He said it was past time for the United States to focus on threats emanating from elsewhere in the world.

The war's start was an echo of a promise President George W. Bush made while standing atop of the rubble in New York City three days after hijacked airliners slammed into the twin towers of the World Trade Center.

"The people who knocked these buildings down will hear all of us soon!" he declared through a bullhorn.

The United States military has carried out a drone strike against an alleged ISIS-K "planner" following a suicide bombing in Kabul that killed 13 American soldiers and at least 70 Afghans.

Less than a month later, on Oct. 7, Bush launched the war. The Taliban's forces were overwhelmed and Kabul fell in a matter of weeks. A U.S.-installed government led by Hamid Karzai took over and bin Laden and his al-Qaida cohort escaped across the border into Pakistan. The stage was set for an ultimately futile U.S. effort to build a stable Afghanistan that could partner with the United States to prevent another 9/11.

The initial plan was to extinguish bin Laden’s al-Qaida, which had used Afghanistan as a staging base for its attack on the United States. The grander ambition was to fight a "Global War on Terrorism" based on the belief that military force could somehow defeat Islamic extremism. Afghanistan was but the first round of that fight. Bush chose to make Iraq the next, invading in 2003 and getting mired in an even deadlier conflict that made Afghanistan a secondary priority until Barack Obama assumed the White House in 2009 and later that year decided to escalate in Afghanistan.

Obama pushed U.S. troop levels to 100,000, but the war dragged on while the Taliban used Pakistan as a sanctuary.

When Donald Trump entered the White House in 2017 he wanted to withdraw from Afghanistan but was persuaded not only to stay but to add several thousand U.S. troops and escalate attacks on the Taliban. Two years later his administration was looking for a deal with the Taliban, and in February 2020 the two sides signed an agreement that called for a complete U.S. withdrawal by May 2021. In exchange, the Taliban made a number of promises including a pledge not to attack U.S. troops.

Biden weighed advice from members of his national security team who argued for retaining the 2,500 troops who were in Afghanistan by the time he took office in January. But in mid-April he announced his decision to fully withdraw and initially set September as a deadline for getting out.

The Taliban then pushed an offensive that by early August toppled key cities, including provincial capitals. The Afghan army largely collapsed, sometimes surrendering rather than taking a final stand, and shortly after President Ashraf Ghani fled the capital, the Taliban rolled into Kabul and assumed control on Aug. 15.

Some parts of their country modernized during the U.S. war years, but Afghanistan remains a tragedy, poor, unstable and with many of its people fearing a return to the brutality the country — especially women and girls — endured when the Taliban ruled from 1996 to 2001.

The U.S. failures were numerous. It degraded but never defeated the Taliban and ultimately failed to build an Afghan army that could hold off the insurgents, despite $83 billion in U.S. spending to train and equip the army. Among the unfulfilled promises: an enduring partnership with a U.S.-friendly Afghan government that could ensure the country would not again become a breeding ground for extremists bent on attacking the United States.