At least one planeload of Afghan refugees who were rescued from an increasingly chaotic U.S.-led evacuation effort in Taliban-controlled Afghanistan landed at Philadelphia International Airport on Saturday morning. Officials say the airport will accept more refugees in the coming days.

PHILADELPHIA - Two planeloads of refugees who were rescued from an increasingly chaotic U.S.-led evacuation effort in Taliban-controlled Afghanistan landed at Philadelphia International Airport over the weekend.

The 500-plus evacuees went through medical evaluations, including being tested for COVID-19, upon their arrival. Officials say some refugees will remain in Philadelphia and others will travel to military bases like nearby Fort Dix in Burlington County, New Jersey.

"We're a welcoming city and this is what America, I think, is about and that's welcoming people in need and not turning people away or building walls," Philadelphia Mayor Jim Kenney said.

The executive director for HIAS Pennsylvania joined FOX 29's Alex Holley to talk about the crisis in Afghanistan with Afghan refugees seeking shelter and safety flying into the Philadelphia International Airport and how you can help.

Kenney was at the airport on Saturday to tour the city's set up for what the city is calling "Operation Allies Refuge - PHL." Philadelphia has established a point of entry for refugees and evacuees that includes culturally familiar food, water, medical care and COVID-19 testing and vaccinations.

In addition to Fort Dix, some refugees will be sent to a facility in Camden, New Jersey where aide workers will assist refugees with housing and accommodations.

"This is really our test as a community and I'm loving that Jersey is going to be receiving a lot of these folks, I've been hearing from people all over the state who want to help these families," New Jersey Senator Cory Booker said.

The best way to support relief organizations is through monetary donations to vetted groups who are providing immediate and long-term aid. In Philadelphia, the City’s Office of Immigrant Affairs is working with Nationalities Services Center and HIAS Pennsylvania.

If you wish to donate material goods, the United States Coast Guard Atlantic Strike Team based at Joint Base McGuire-Dix-Lakehurst in New Jersey has created a list of goods and materials to donate directly to incoming refugees. HIAS Pennsylvania is also accepting in-kind donations.

The incoming refugees came to the area days after two suicide bombers and gunmen attacked crowds of Afghans flocking to Kabul's airport Thursday, transforming a scene of desperation into one of horror in the waning days of an airlift for those fleeing the Taliban takeover. The attacks killed over 100 Afghans and 13 U.S. troops, Afghan and U.S. officials said.

Peter Cuoco is frustrated that so far, Carl and his family have been turned away at the airport as he says the Taliban are after him.

The blasts came hours after Western officials warned of a major attack, urging people to leave the airport. But that advice went largely unheeded by Afghans desperate to escape the country in the last few days of an American-led evacuation before the U.S. officially ends its 20-year presence on Aug. 31.

The Islamic State group claimed responsibility for the killings on its Amaq news channel. The IS affiliate in Afghanistan is far more radical than the Taliban, who recently took control of the country in a lightning blitz. The Taliban were not believed to have been involved in the attacks and condemned the blasts.

In an emotional speech from the White House, U.S. President Joe Biden said the latest bloodshed would not drive the U.S. out of Afghanistan earlier than scheduled, and that he had instructed the U.S. military to develop plans to strike IS. 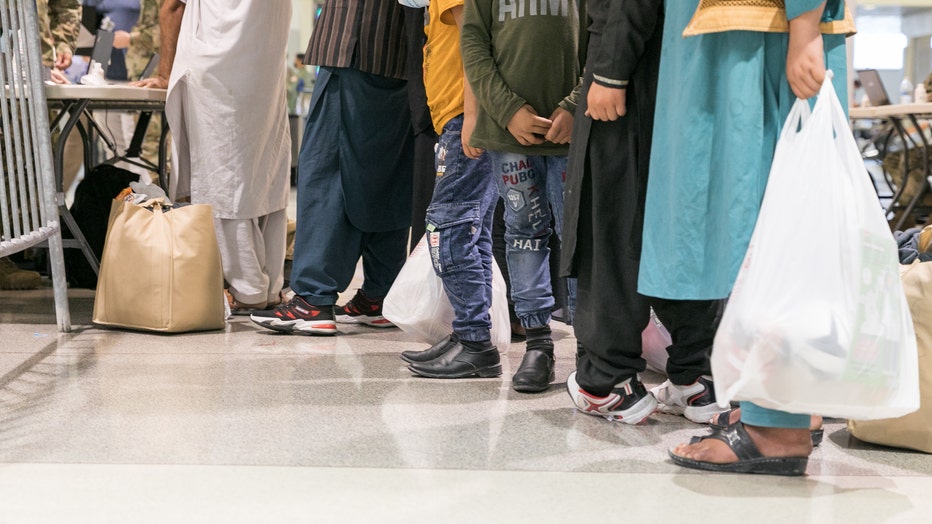 The United States on Saturday used a drone strike to kill two unnamed ISIS-K targets amid the ongoing threat of further terrorist attacks near the Kabul airport. President Biden said the strike won't be the last and that doubled down on his promise to pursue any groups who cause harm the United States.